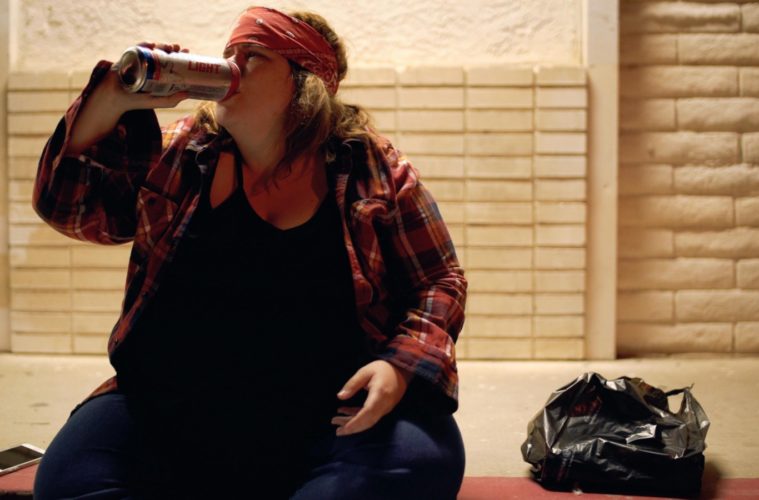 Equal parts cruel and sympathetic, Colby Holt and Sam Probst’s Pig Hag is a shocking indie debut occupying the psychological space of Jodie (Anna T Schlegel), a 36-year-old travel nurse obsessed with Guns N’ Roses who is looking for love and companionship. It doesn’t help her sister Chrissy gives her all the obvious advice when seeking dates and then laughs at her when she enthusiastically tells her that she’s met a great guy. The guy, a fellow Axel fan and a widower named Dustin (Tony Jaksha) has plenty of baggage on his own as we learn over cheap tall boy beers besides a motel pool.

All is temporary for Jodie, who dreams of going on the road and completing a series of short term contracts, claiming she’s not finding herself in Los Angeles. To be fair, her lonely LA might as well be Erie, PA; this is a far from the glamour of a traditional Hollywood story which might star an actress disguising her looks in advance of a happy ending. Pig Hag does have the occasional moments of humor between the pain with Jodi’s gay best friends helping her through the awkwardness of it all via group text.

Holt and Probst masterfully interweave Jodie’s social media diet, including aspirational photographs of friends kids and brunch dates as she looks onward, swiping left and right and never finding what she’s truly looking for. The film’s nonlinear structure at first tackles the material in a somewhat confusing way, leading us to believe Jodie and Dustin have a happy ending before evolving towards a more realistic and devastating conclusion.

Pig Hag is a fascinatingly polarizing film by design; on one hand, it’s a cruel, tough love tale that intimately portrays a woman seeking her basic needs through any means necessary. On the other hand, it cruelly mocks her inability to compromise as she’s jaded by men who “ghost” her and proposes to her posse a way of feeling whole that will only be effective for so long. The film opens with a painful conversation between a character identified in text only as “Mitch internet” who insults her only to continue to hit her up via text at questionable hours of the evening. No wonder she is the way she is, especially in a raw scene which concludes a relationship key to the film.

The film shifts tones and allegiances moment to moment all held carefully in check by a fearless performance by Anna T Schlegel. Despite a few over the top moments, Pig Hag is a nuanced and mature although not restrained portrait of someone who we all have met. This film sheds some light not only on swipe-dating culture but also the kind of people that are typically around the time Journey’s Don’t Stop Believin’ is playing and the house lights come on.