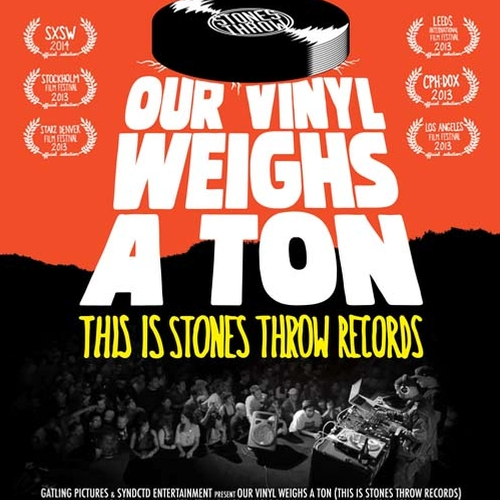 Our Vinyl Weighs a Ton is an insightful and often fun documentary about Stones Throw Records, an imprint started by Chris Manak (aka Peanut Butter Wolf) as a means of releasing a record that the majors didn’t get. Directed by Jeff Broadway, the documentary is divided into multiple characters, focusing on Manak’s early life growing up in suburban San Jose before eventually moving to Oakland, harnessing the energy of that racially divided city by simply releasing the kind of music that interests him.

Starting Stones Throw with Charles Hicks (aka Charizma) allowed him to discover emerging acts along the way, including current chart topper Aloe Blacc, who left the label for a major and had declined to participate in Broadway’s film. Each chapter contains individual triumphs and tragedies, from the murder of Charizma in 1993 (at age 20) to the current challenges faced in the wake of digital distribution. Stones Throw is a true vinyl lovers label forced to adapt, and it successfully does so under the direction of Wolf, tastemaker-in-chief. Employing a wide array of interviews, the film’s final passages fail to continue the energy of its first acts, veering off course into a VH1 Behind the Music kind of tribute film, with well-known recording stars including Kayne West appearing on camera, offering commentary on the cultural importance of Peanut Butter Wolf. The energy and excitement of the film’s early segments, including the story of Wolf and his childhood pal who aspired to have the world’s greatest record collection, soon dissipates. Some founders (aka “OG” members) who lived in the Stones Throw House, a kind of collective, have moved on to “safe” adult jobs, while remaining dedicated to the label as a weekend hobby.

Whereas Andrea Blaugrund Nevins’ The Other F-Word offered us insight into what turning 40 and remaining punk rock looks like, Our Vinyl Weighs a Ton is a tribute to the accomplishments of Stones Throw and their music, unfortunately lacking the kind of intimate personal access that sets a documentary apart from the pack. Broadway does use verite techniques in the film’s latter segments, yet it doesn’t quite hold together. Insightful about music, style and taste, Our Vinyl Weighs a Ton left me wanting a little more substance and perhaps a little less fan service.

Our Vinyl Weighs a Ton is screening at SXSW and will open in LA today, New York on March 19th, and in other cities this spring. More information can be found on the official site and the trailer can be seen above.