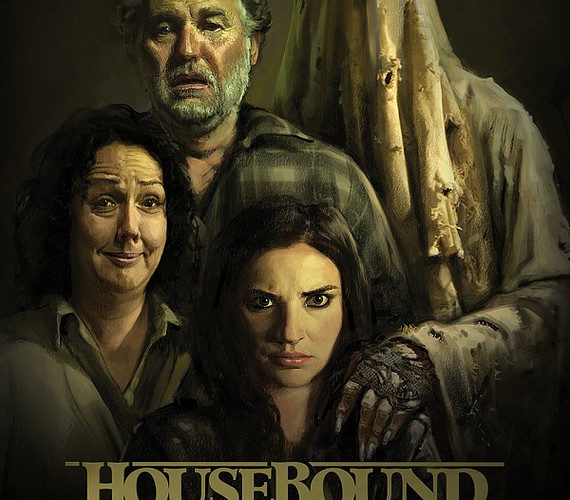 Housebound takes the sealed bottle horror genre and waltzes right up to it, telling it that everything you expect, the characters expect as well, and lets things fall where they may. Everyone is immediately on top of their game when the haunted house aspect is revealed, but no one seems particularly good at keeping the bad stuff from happening. Perhaps general ineptitude is where most of the hilarity in director Gerard Johnstone’s newest film comes from, but since when is that anything but funny in spurts? Kylie Bucknell (Morgana O’Reilly) is a 20-year-old rebel that manages to fail at the big details during a heist and is sentenced to house arrest at her mother Miriam’s (Rima Te Wiata) house. That wouldn’t be too bad, but between all of her sudden free time and Miriam’s doting, but gossipy, personality she feels like it might just be apt punishment. Things get more interesting when she overhears her mother’s ramblings about the house being haunted. She scoffs at the idea until she starts to hear things go bump in the night as well. Soon, even her parole officer Amos (Glen-Paul Waru), who fancies himself a paranormal detective of sorts, is brought into the fold as well. When Kylie remarks about how useless and senseless all of this is, Amos challenges Kylie about what she is going to do. “I’m gonna punch it in the face,” she barks, to which he scoffs, “You can’t punch ectoplasm,” as if it’s the most normal knowledge in the world. This is the kind of dialogue you can expect, and if that kind of off-the-cuff and unexpected humor jives with you, it will keep working throughout the film.

The film plays with Kylie’s inability to leave the house, solving the issue of why the group doesn’t just run away. Of course, in reality, she can leave, as she isn’t in any mortal danger due to her ankle monitor (“Oh my, isn’t that fancy” her mother remarks), but that issue is solved later on. Yet Housebound nearly commits the fatal flaw that most films intentionally avoid: having an unlikeable protagonist. Kylie is a bit of an adult child, as she doesn’t do her chores, is lazy, and continually pouts around. She’s also extremely sarcastic, but Johnstone smartly allows her character to shrug off what would normally scare people. Thus, when the horror aspects really start to ramp up and it begins to affect Kylie, the audience gets antsy as well. Sam Raimi and early Peter Jackson have shown that you can get really silly and still make a horror work; the Jackson influence is apparent, especially when you consider the film was shot in New Zealand. In Housebound, there’s rarely a misstep in the goal of mixing horror and comedy, as one always feel confident they are meant to laugh at scenes (at one point, a killer teddy bear element is introduced to much hilarity). At first it provides a shock but after being burned and bludgeoned to the point that some of the innerworkings are showing, it becomes a wickedly funny prop that keeps cropping up and whispering in a demonic tone. Recurring jokes are often implemented and the narrative turns into a compelling mystery involving multiple storylines woven at once. There’s certainly a slow build, but the character building and setting are not just necessary, but handled in an experienced fashion.

The combination of Amos’ general ineptitude as he constantly bangs his body on things, gets trapped, or is taken unaware, with Kylie’s snarky attitude and general air of disbelief, makes them the worst people to solve a mystery — which is exactly why Housebound works so well. This is a silly film, but it has some serious horror/thriller chops. Filmed for less than half a million dollars, Housebound is the kind of independent film that one can hardly tell where corners were cut. The film’s most clever and entertaining action beats are in the final third, but some of the elements that are thrown in to keep audiences guessing throughout are more intriguing. For 109 minutes, I was thoroughly put through my paces in terms of laughter, thrills, and a few chills, and I can’t ask for much more.

Housebound premiered at SXSW 2014. Watch a clip above.