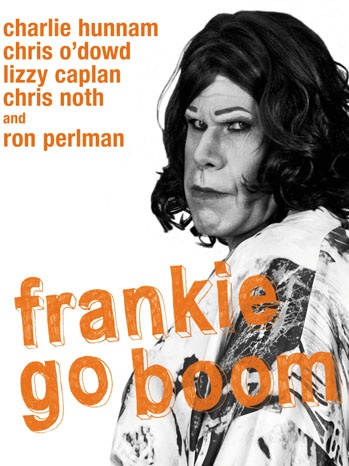 Jordan Roberts’ Frankie Go Boom is, above all, a good time. There’s many ways a comedy like this can fail, most run out of steam after promising first act, but this one keeps reinventing itself, throwing another wrench in gears. And the crowd I saw it with seemed to agree most of what’s thrown up lands with big laughs.

Frank (Charlie Hunnam) has been humiliated his entire life by his older brother Bruce (Chris O’Dowd), an aspiring filmmaker, and Frank’s embarrassments from the age onward to his wedding has been lensed by Bruce. Both men have ticks and shortcomings, Frank is a recently divorced writer working from a camper in Death Valley and he’s called back to the suburbs by his parents for Frank’s home coming from rehab. They criticize Frank’s life decisions while giving Bruce a free pass for his past indiscretions. They ride Segways to town as Bruce had sold the family car for drug money.

After the homecoming, Frank picks up Lassie (Lizzy Caplan), who is biking while intoxicated and they have an odd one-night stand Bruce captures on video. At least King Kelly, another SXSW feature this year, had the common decency to keep the camera focused on her own crotch. The tape leaks to Jack (Chris North,  a jacked up former movie star who likes to party hard (there is an unexplained sedan parked in his pool) and jog in just a thong. Also interested in Bruce’s film work are a pair of evangelical dentists who hope to use their fortune to fund films with strong Christian messages. Bruce, like many an entrepreneurial filmmaker, doesn’t miss a beat.

The tape goes missing, wandering around from colorful character to colorful character, including a transsexual named Phyllis, played by Ron Perlman. Also colorful is Kaplan’s Lassie, who resists the “Manic Pixie Dream Girl” status of many leading ladies that simply appear in films about depressed men. Keeping the trains running on time in a comedy like this is no easy feat and it succeeds, leaping from absurd scenario to absurd scenario as the sex tape makes the round and eventually ends up online – horrifying Frank, while building Bruce’s resume.

While not one-hundred percent original, it recycles and subverts many existing tropes in broad comedy, something completely unexpected from Jordan Roberts, whose previous film work includes the family drama Around the Bend and the narration for the US versions of March of the Penguins. Tthe energy level here approaches the frantic pacing of a Will Gluck film, but where it doesn’t quite succeed is that it never quite decides what it thinks of O’Dowd’s Bruce. I suppose his family will forgive and forget because he is family. Hunnam’s Frank is an effective straight man, although as a writer, why isn’t he taking his own revenge? Maybe we can look forward to that in Bruce Go Boom? I’d welcome it.