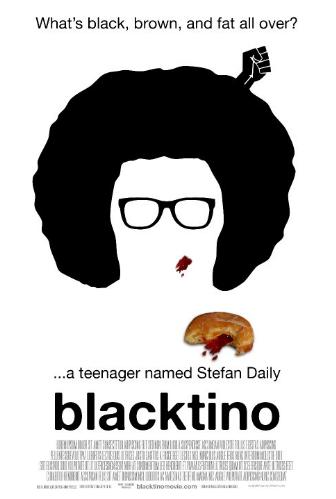 Blacktino is nothing short of revolutionary. As a crowdpleaser, it’s so frank about diversity, the notion is reduced to its smallest unit: the individual. Aaron Burns has crafted a rich and lively human comedy blending the dead pan of Napoleon Dynamite (and the better films it influenced, arguably including Juno) and the rich humanity of Mike Leigh.

Austin Marshall is Stefan Daily, an overweight kid whose African American mother is chasing demons unmentioned while his estranged Hispanic father is a Hollywood producer whose latest film is an action adaptation of Citizen Kane, starring Michelle Rodriguez as Citizen Jane.

Stefan’s best friend, Laura (Devyn Ray) is a goth girl –with a valid reason to be, she calls Stefan “Urkle” – after Steve Urkle’s alter ego (there’s another hilarious Family Matters reference a few scenes later). Stefan does not have an easy life: being both bi-racial in a school that has clearly delineated lines he refuses to fit into a box. He blogs and writes plays with the dream of becoming an actor, encouraged by the only real teacher in his school. He and his friends are in all Advanced Placement classes taught by football coaches.

Things are complicated when his sweet nana (Selma Pinkard), who has been raisng him, dies suddenly and he’s left with his mother (Timeca M. Seretti) and her new loser boyfriend (played by Jeff Fahey). His father is but attempting to get back into his son’s life, especially after he’s abandoned by his mother, evicted from their apartment and taken in by the eccentric adopted parents of Laura (played by Danny Trejo and Dana Wheeler-Nicholson).

All of the requisite elements for a high school comedy are present including the gorgeous but bitchy hottest girl in school (Denise Williamson), the jocks, the cool black kids, and the preppy white kids. Everyone plays their role, Stefan and his friends defy stereotype, especially Tiger Sheu’s Matt Miyamoto, who is both Asian and disabled – suffering from multiple sclerosis.

Blacktino is a semi-autobiographical first feature from Aaron Burns, formerly a special effects man; he’s crafted an offbeat masterpiece using Austin-based actors that claim to be mostly recruited off of Craig’s List with established talent in supporting roles. Here’s a film that’s effective first as a film, and not a message movie – it achieves what films starting with a message could never do, simply through it’s unfiltered and unapologetic authenticity. Blacktino announces the arrival of some major new talent.