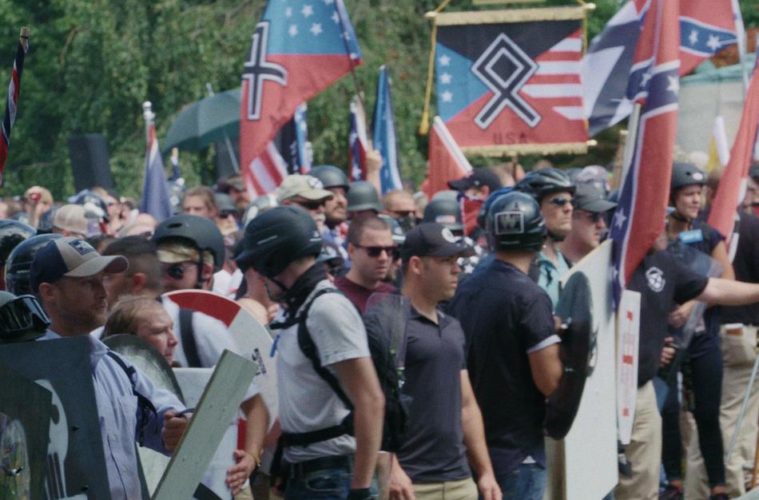 SXSW Review: ‘Alt-Right: Age of Rage’ is a Timely, But Rushed Documentary

Despite being billed as a documentary about the subject, Alt-Right: Age of Rage doesn’t know what to make of the modern day neo-Nazi movement. At least some of the film’s subjects would resist the label, saying that the purpose of the alt-right is to protect European heritage, just as they would tell you that the Civil War and Confederate flag have nothing to with slavery. You can’t win an argument with the brainwashed, but the film–to its credit–gives an equal platform to those leading the white nationalist movement and their opposition: organizations like ANTIFA and the Southern Poverty Law Center.

The documentary focuses largely on the face of the alt-right movement and instant meme Richard Spencer, a University of Chicago-educated “academic” quick to call someone a “cuck,” but barely able to recognize the death of Heather Heyer as a tragedy. The documentary allows its frat boy subject to talk himself into incoherency, propagating the need for a white ethnostate and greeting movement supporters with a “Heil Victory.” On the opposite side is ANTIFA, and specifically Daryle Lamont Jenkins, founder of the One Person Project and a figure who fights fire with fire without the use of direct violence. In other words, he’ll get in Spencer’s face, but won’t sucker punch him.

The New Radical director Adam Bhala Lough’s Age of Rage might be the first completed documentary since last summer’s events in Charlottesville, VA, but it feels like it could have used some more time in the editing bay and a few more weeks in the shooting process as it jumps around from side to side without a rhythm. Complicating things, the film also spends an extensive amount of time with Jared Taylor, the elder statesman on the side of the alt-right movement. A member of American Renaissance–a pseudo-intellectual group that believes whites come from superior genetic stock and will soon be reduced to a minority–Taylor laments the effect the Charlottesville events had on the movement and their efforts to preserve Civil War monuments. His cluelessness is astonishing as he acknowledges the zeitgeist is not in the group’s favor, and yet he’s completely unable to see three steps ahead and the group’s end.

There’s also time spent with the Silent Majority, and the film chooses to focus on the “adults”–or rather the ones with a following rather than the common man chanting, “Jews will not replace us” and the “Alt-left” fridge. The danger of spending time with these individuals is two-fold. It lends legitimacy to these ideas–polished men of privilege aiming to influence the less educated–while also potentially allowing vulnerable youth to be sold out yet again by denying them some agency or a chance at intervention.

Then again, listening and intervention is not the point of the less-than-comprehensive Alt-Right: Age of Rage, even if Lough does occasionally call his subjects out for their viewpoints as he questions them on the death of Heyer or the mass killing of black churchgoers at the hands of Dylan Roof. The foundation for a terrific, informative and bone-chilling documentary about where we currently are is here, but the problem is that we’re still very much in the middle of this story.