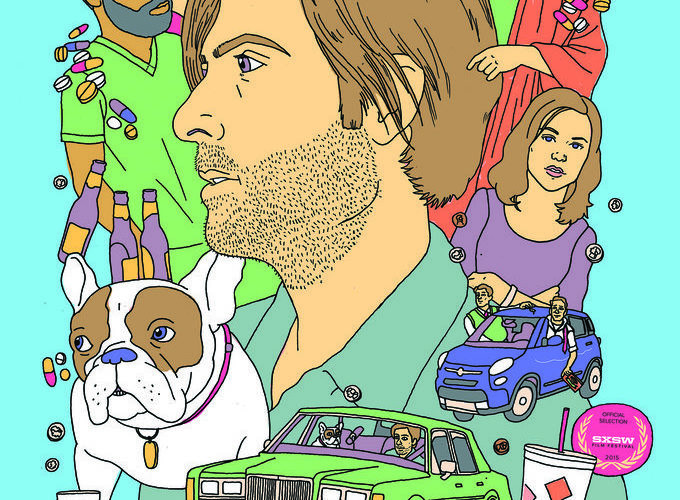 Jason Schwartzman has again nailed the slacker anti-hero in writer/director Bob Byington‘s 7 Chinese Brothers. The film revolves around 30-ish Larry (Schwartzman) who has two loves in his life: his constantly snorting french bulldog named Arrow and alcohol. As we wind our way through the narrative it becomes increasingly clear that the more time you spend with Larry the more you simultaneously enjoy his company and hate him at the same time. Larry is testing at the best of times, with a constant patter of snark and commentary about the world around him even when people aren’t listening.

If only he could get his life together, well, then we wouldn’t have much of a movie in this case. The film begins with Larry being fired from his gig at Buca di Beppo, an Italian-style family restaurant, for stealing liquor, among other things. So as a send off, he decides to steal a bottle of tequila while his employer watches and then keys the car of the aggressive alpha-male coworker. Larry doesn’t make the best decisions for someone trying to skate through life but he still manages to make by. He makes frequent trips to see his grandma in a nursing home (Olympia Dukakis), though she notices it happens more around the time that he needs money. There he also meets with his nurse friend Norwood (TV on the Radio frontman Tunde Adebimpe), who helps watch out for his grandma while providing Larry with pills.

When they go out they try to pull off the fact that Norwood is a doctor instead of simply an aide to pick up women, but Larry doesn’t much care for the chase. When he takes his beat-up junker of a car in to get serviced at the local Quick Lube he meets Lupe (Eleanore Pienta), an attractive manager. That very same day he manages to apply, interview, and get hired for a position that he starts to take an interest in. At first it’s obvious it is just for his interest in Lupe, but one gets the sense over time that he actually enjoys it.

There is an odd barrage of alpha-male coworkers in Larry’s life that I’m sure would reveal interesting history from Byington’s life. And it has to be mentioned that the love between Larry and Arrow is more than just on the screen. That is actually Schwartzman’s dog, who made his debut on the film. But it’s the quirky nature of Byington’s sharp comedy that elevates the film. Sure, it can be off-putting and dry but it rarely goes over-the-top. A favorite moment is when Larry gets in an argument with a recently-graduated vet after throwing an empty soda cup into the road that hits the passing vehicle. What might have turned into fisticuffs in most films instead turns into a weird exchange that ends with Larry in the car riding amongst the graduate’s friends.

Schwartzman is able to keep one enamored with his character just enough to let most of his shenanigans slide by. You root for him, and not just because he is the protagonist but simply because he doesn’t seem to do much that is outwardly bad. He is the quintessential slacker that never really succeeds because it seems he doesn’t care to. If he’s got the two most important things in life then all is right with the world.

That, of course, doesn’t make for the most satisfying film, but 7 Chinese Brothers has an abundance of half-hearted slacker charm that it is hard to fault. Carefully constructed to give Larry plenty of off-flavors, Byington’s latest should be a film that pleases a specific audience and finds a welcome home. After all, it’s hard to stare into the face of a dog like Arrow and not find something to love.