Swallow Review: Haley Bennett is Trapped in a Patriarchal and Purgatorial Limbo 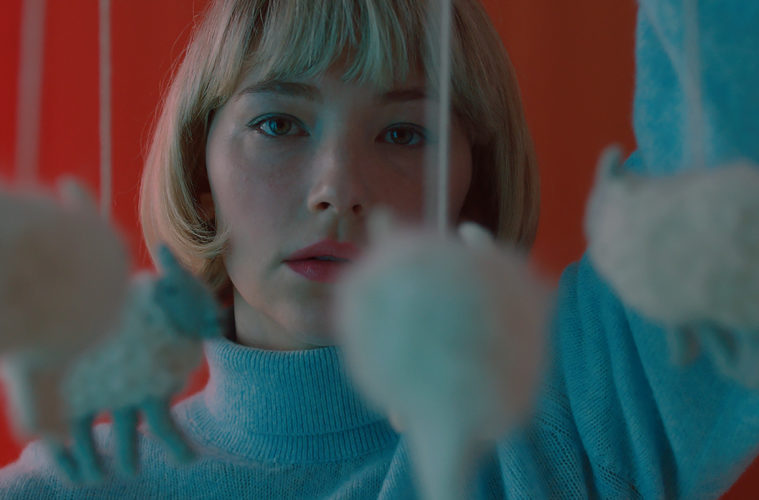 Hunter (Haley Bennett) has never had control over her life. She’s tried her hardest to claim some, however, by giving away her love. She gave it to a mother who treated her like an afterthought compared to her siblings, a career in art that always found itself to be just out of reach, and the man (Austin Stowell’s Richie) she walked down a matrimonial aisle towards despite his only ever seeing her as a prize—a possession for a shelf of conquests someone in his socio-economic sphere needs to prove successful. As every projection of her love was met by indifference and/or irritation, it ate at her resolve to believe it was possible to become whole. Numbed to their apathy, Hunter’s compulsion to feel changed course.

Inspired by his grandmother’s institutionalization for OCD and propelled by his own experiences having identified as both genders during his lifetime, writer/director Carlo Mirabella-Davis’ fictional feature debut Swallow provides its lead an escape through pica. Characterized by the craving to chew and consume non-nutritive substances, this psychological disorder gives Hunter the ability to dictate what she puts in her body. The risk supplies power. The secret creates purpose. Because what else is there to do in an empty mansion chosen by her CEO husband and bought by her one-percenter in-laws (David Rasche’s Michael and Elizabeth Marvel’s Katherine)? She’s judged, discounted, and patronized everywhere she turns. Her purpose to ensure everyone is happy at her own expense makes her a hostess to a life that stripped away her autonomy.

It’s this subtle complexity that shines above the more overt implications of Hunter’s past because it shows the impact of society’s patriarchal strings. Where she comes from and how it infers upon where she is at present (and ultimately where she goes thanks to an emotionally potent climax opposite Denis O’Hare) is crucial, but it shouldn’t discount the insidiousness of her life as a member of the Conrad family and their materialistically egocentric existence. It’s therefore important to acknowledge that the marbles, thumbtacks, and batteries aren’t the only things inside Hunter during this drama. She’s also pregnant. And while surfaces might presume that this baby is the product of love, her devolution reveals otherwise. She didn’t put it there. Richie did. The Conrads did. Capitalism did.

The road to Hunter’s current position was built with coercion. That she should be grateful to Richie for plucking her from obscurity is a construct of traditional gender norms wherein women are subservient to men. It’s about “faking it until you make it” like Katherine explains—hollowing yourself out until the shell that remains fills with the wants and desires of a husband providing you his fantasy as your own. So the instant Hunter revolts (knowingly or not) is the instant the idyllic façade of happiness cracks to expose scowls of resentment. Richie’s “love” suddenly comes into question as the objective truth of its existence disguises its target’s confusion. Does he love Hunter, the baby, or the idea of being a virile man capable of preserving his genes?

It’s this confusion that pushes Hunter to escalate her self-destructive behavior since death is seemingly the one thing she still has the authority to inflict upon herself. That’s where things are headed after all. Swallowing the glass marble was a lark, the thumbtack a test. Everything after is a means to feel pain as a reprieve from the paralysis of being a fish in a fishbowl swimming circles without the chance for spontaneity. If things go far enough for everyone to change their attitude, a glimpse of hope and happiness could be possible. It only takes one backslide, though, to restart the cycle. If the last time didn’t work, this time will have to be worse. And if that fails too? Things might never get better.

Mirabella-Davis’ Swallow portrays Hunter’s inertia as though it were the complacency of a drug-addled consciousness. She’s a victim of a world that hates women, one where men assert unchecked control because they’ve never endured the sense of helplessness their actions wreak on others to recognize their immorality. Hunter is threatened, placed under de facto house arrest with Luay’s (Laith Nakli) live-in nurse as warden, and forever coddled and lied to as though she’s a child who cannot be trusted. So of course she retreats further. Of course she acts out to force Richie into saying the kind things he won’t say without a certainty of reward. The Conrads treat everything and everybody like a commodity. Hunter is no different. She’s a baby-making machine and nothing else.

You either accept that role (like Katherine obviously has with her Stepford way of pushing her daughter-in-law in the direction to follow suit) or find yourself trapped emotionally, psychologically, and, if things grow too drastic, physically. This is a gendered class of people figuratively raping another to serve their needs. They buy complicity with money, gifts, and pity. And Hunter is doing everything she can to stay afloat and let her heart conquer her mind because she does know what’s happening. The reason things feel satirical and humorously surreal at the beginning is therefore a direct product of Bennett’s performance. She perfectly embodies the zombie-like motions that result from existing in this purgatorial limbo that demands you be what your benefactors want. Smile. Apologize. Never raise your voice.

And as that role disintegrates, she grows more willful. Sometimes it’s little things like taking the benefit of a hug regardless of its creator’s gross intent. Sometimes it’s standing up to Luay as the one person with less say in their dollhouse than her and then also accepting the empathy that position affords him (noticing the pain in her eyes that Richie is blind to seeing). It all leads towards a heart-wrenching series of events that shed light on how Hunter got here. Suddenly we’re free of the plastic, apathetic veneer wealth fabricated around her to see the naked suffering underneath. Can she survive it? Can she take control despite the mounting fear of becoming yet another monster? That she pauses to wonder shows she can.