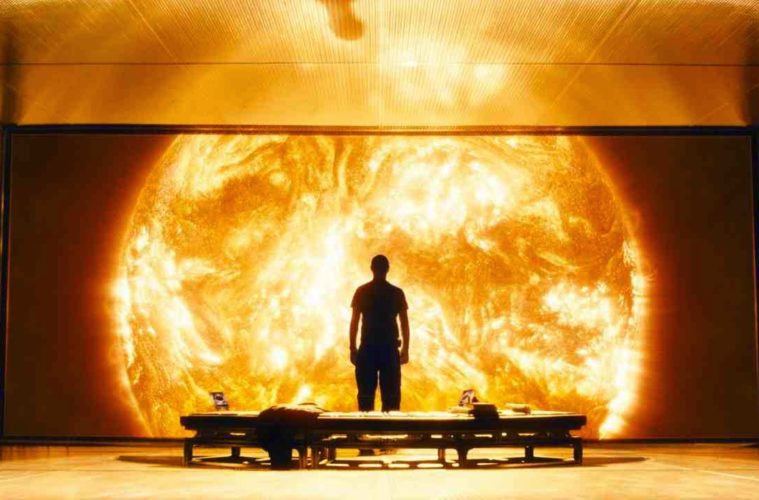 ‘Sunshine’ and Humankind’s Poetic, Horrific Will to Live

Humans are nothing if not stubborn. Through our entire existence, we have insisted upon our right to remain alive, evolving a brain so that we might push against anything that stood in our way to conquer what we took to be rightfully ours. We decided that simply being born granted us the right to beat the earth into submission. We expanded through the most extreme weather conditions and forced bodies to adapt to landscapes that never wanted us there. No matter what the odds, no matter how many floods or droughts or hurricanes or fires may have come to wipe us out, we persisted. We inherited something precious and stripped it clean, slowly destroying everything given to us because we felt everything wasn’t enough. It’s horrific, but there is something poetic about it as well. In the face of indifferent destruction we decided that the toil and pain was worth living and loving and hating and dying. It’s practically an underdog story: in the battle of Man vs. Nature, we may have sabotaged ourselves, but we showed nature who’s boss in the process.

Danny Boyle‘s Sunshine takes place in 2057, and lies somewhere between 2001: A Space Odyssey and The Core. The sun is about to burn out, so we have to detonate a bomb inside it to recharge. We have used up the last of our resources in order to build the second bomb, and this shot is the last one. Following the crew of the Icarus II, seven years after the first ship lived up to its fate-tempting name by failing on this same mission, Sunshine begins as they near their destination. Everything is running smoothly until they pick up the distress signal of the original Icarus, and must decide whether to continue on their course or divert to investigate. As with most “conveniently mismatched spaceship crew” sci-fi movies, some fissures are apparent, relations are tense, and human error imminent. Everything hangs on a choice, and then everything slowly falls apart.

The most remarkable thing about Sunshine is the way it blends the clean, cold lines of mechanical equipment with the textures and flaws of its human counterparts. The camera glides over slick surfaces but focuses often on faces, displaying a particular fetish for eyes. For such a future-chic picture it has a very visceral, almost primal feeling, and we are always in touch with the messy reality of the subjects against the industrial background of electronics. Unsurprisingly, the use of light factors in heavily. The scenes in the ship’s interior are soaked in blues and greys, spliced together with piercing flashes of sunlight and the crew’s awed faces bathed in orange. It’s an obvious trick, but highly effective, and the impeccable blending of CGI coupled with beautiful washes of color create an overwhelming assault on the eyes, something so sensual and bright that it feels heavy on one’s chest. Further enhancing the lush futuristic aesthetic, much of Sunshine is made abstract with quick cuts, extreme close-ups, and effects blurring the action. It all unfolds in front of an indifferent sun, the closest thing to a tangible God that our species may ever know. Much of the film’s horror lies in its very presence, as at least a vengeful God acknowledges that we are alive. The sun only sits uncaring, seeming infinite. Searle (Cliff Curtis), the crew’s psychologist, spends much of his time in the sun’s rays at the observation deck. “The point about darkness is, you float in it. You and the darkness are distinct from each other because darkness is an absence of something, it’s a vacuum. But total light envelops you. It becomes you,” he says in explanation. The sunbathing serves as something of an invigorating drug, and the crews of each Icarus mission seem uncontrollably drawn to its power. The sun is life itself, the light at the end of the tunnel, and as fire can create or destroy, the sun is to be respected and feared. This is a story that is told only in extremes of hot and cold, peace and chaos.

In a third act that’s been widely dismissed because of the sharp turn into the pattern of a cheap slasher from the rest of the film’s dreamy philosophical tone, chaos fully erupts. When the crew docks with Icarus I, the ship seems abandoned, but there are signs of sabotage. Essentially, that ship’s captain, Pinbacker (Mark Strong), had a last-minute crisis of faith: if God decides we must die, it is not our right to challenge or outsmart Him. He sneaks aboard the Icarus II and sets about killing the crew and their machines, a bloody spectre that is never shown without a heavy overlay of CGI blurring his image. In the context of the visceral sweating and heavy breathing and panic of the first two acts, it’s only natural that this journey would devolve into violence. Slasher-esque though his actions may be, Pinbacker lurks and strikes much like the nagging urge of a depressive to just opt out of life. For all the grand themes about religion and existence, despite the epic scope of its production and the magnitude of its images, this is primarily about tiny, insignificant people. Fallible beings are forced into decisions that will determine Earth’s fate, and Sunshine‘s fascination lies in watching them react. Like most pictures of this ilk, its effectiveness comes down to little things: a short video message for home, a tiny sprout in the charred wreckage of an oxygen garden, a virtual-reality simulation of an ocean wave, an ability to see the beauty in a bomb going off. To be chased by a crazed bogeyman isn’t just about defying the institution of religion with science, but to assert our right to live. Though Pinbacker represents a generic fundamentalist who has shunned the God of nature that is literally right in front of him in favor of the vague God of earthly religion, he also may stand for a sort of giving up — a restless conscience whispering to us that we don’t deserve what we already have, that those small joys are worthless. The question asked of the crew, specifically “hero” physicist Capa (Cillian Murphy), is simply: what’s the point? Why bother? Our time to give in has come, and there’s really no need for all this hassle. In Capa’s final decision to defy God’s will and stave off destruction, he also keeps alive the inextinguishable human spirit. Nature has thrown us yet another obstacle, and again we launch a kamikaze attack rather than give in.

Sunshine asks its audience to surrender themselves completely to experience. The overwhelming sense of scale, the sensuality of images and colors, and hypnotic electronic score all seek to lull you into a sort of awed trance, hoping that by the time a complete break from any semblance of reality comes you’ll be so far gone as to buy whatever the final act is selling. Mostly, it works – maybe not for those looking for a 2001 redux, and certainly not for those seeking a logical scientific approach. For those who want to lose themselves in light and sound and feverish emotion, however, it is a wholehearted success.