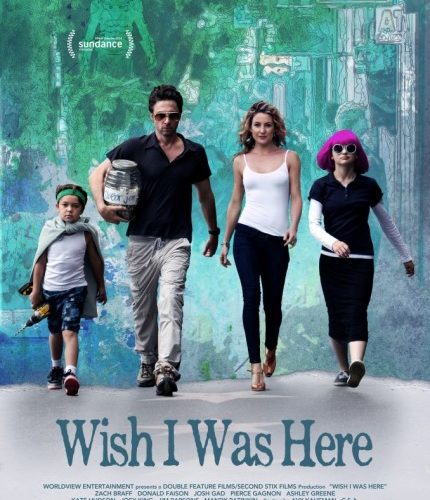 [Sundance Review] Wish I Was Here

The great adventure at the heart of Zach Braff‘s Wish I Was Here is the search for purpose. An answer to the question, ‘why are we here? And for what reason?’ Even though our protagonist Aidan Bloom (Braff) seeks for an answer, that the film ultimately dissolves into a collection of scenes without much reason is perhaps its biggest revelation.

A hot commodity well before Sundance thanks to its controversial funding process, Wish I Was Here boasts a very impressive supporting cast, including but not restricted to Mandy Patinkin, Kate Hudson, Jim Parsons, Josh Gad and Ashley Greene, as well as some nifty production value and an expectingly well-placed soundtrack. Written, directed and starring Braff, a decade after his debut feature Garden State emerged as a classic indie darling, one would expect something a bit more cohesive and clear-headed in this sophomore effort. Instead, we are offered a meandering plot with a muddled message led by the relatively uninteresting, unlikeable Aidan, a struggling actor who’s father (Patinkin) is dying. The hospital bills prevent Aidan’s father from paying his grandchildren’s private school tuition, potentially forcing them to enroll in public school. Aidan instead decides to home-school them, and the results are meant to be chaotically charming.

Lost in the clouds of an acting dream that continues to fade away, Aidan’s kids (Joey King and Pierce Gagnon) and wife (Hudson) begin to suffer as the money runs out and the patience grows thin. Throughout we are offered very brief, very thin dream sequences involving Aidan as a spaceman running from a black-cloaked harbinger of doom. Though the look and feel of these sequences is engaging, their relevance quickly gives way to repetitiveness. The thematic ideas present in these sequences are obvious, that they’re never built on is a disappointment.

There’s not much building going on in general, and we’re never quite clear on what exactly drives the action. Though peppered with the kind of pseudo-existential observations that made Garden State both accessible and thought-provoking, it’s the major narrative movement that never quite finds direction. Aidan is at first against the idea of home school for his kids because he won’t have time to audition, then he’s for it. We’re introduced to Aidan’s defunct-genius brother (Gad), who’s got a mind full of both numbers and creativity. In a nice little special effects sequence, we watch him figure out how to build the perfect costume for Comic-Con, measurements and costume design populating on the screen. As soon as the sequence is over, it’s never used again. In fact, Comic-Con as a whole is a red herring here, constantly brought up but ultimately listless and unnecessary to the story being told. A couple of key supporting characters have one scene in the first act then disappear for over an hour, only to return at the climax to tie up major loose ends. These people have very little to do with what’s going on throughout, and their last-minute “importance” feels lazy and tacked-on.

It’s Hudson who stands out as the strongest player here. As Sarah, the longtime rom-com queen reminds us all why we loved her in the first place. There’s a vulnerability to her smile that’s very welcoming, and Braff makes very good use of the feature. Hudson’s natural grace adds a weight and depth to Sarah Bloom that we don’t see in the other characters. Here’s hoping this performance marks the beginning of a much-needed career transition.

There’s big questions about faith and meaning in Wish I Was Here, and Braff is clearly passionate about digging into the complexities that come with even breaching these impossibles subjects. Unfortunately, the film spends so much time trying to define itself, we’re never allowed to immerse ourselves into the experience. There are real-world problems at hand in Wish I Was Here that deserve a bit more care and balance from the filmmaker.

Wish I Was Here premiered at Sundance Film Festival 2014. One can see our full coverage of the festival below.