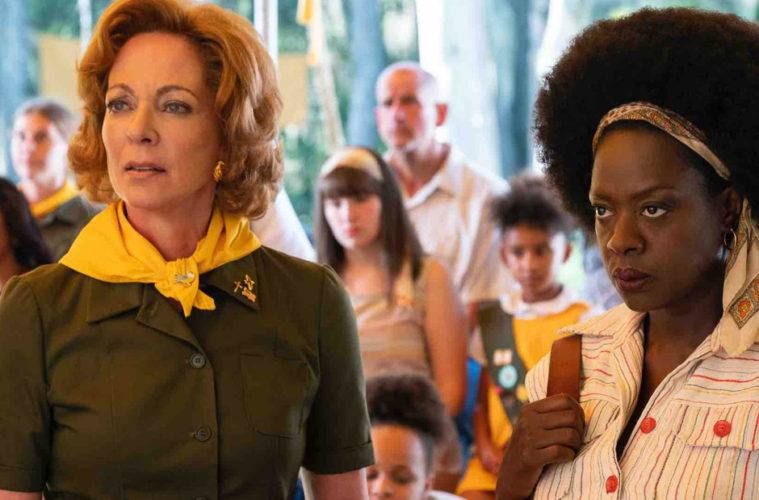 As if created in a random Sundance movie generator, Troop Zero has quirkiness for days, talented actors playing broadly comedic caricatures, a predictable three-act structure of the underdogs winning in their own way, and a deeply saccharine ending constructed to induce bittersweet tears. While this by-the-numbers crowd-pleaser goes down fairly easy as any sugary, feel-good film is designed to do, there’s also a hollow emptiness at its center, rendering it to be a well-intentioned, yet ultimately forgettable experience.

Set in 1977 in the fictional small town of Wiggly, Georgia, Troop Zero centers on Christmas Flint (Mckenna Grace), a 9-year-old who walks to the beat of her own drum in her distinct red boots. She doesn’t fit in with the popular girls or the bullies, but is best friends with Joseph (Charlie Shotwell), who fancies David Bowie and hairdressing. Obsessed with the mysteries of the universe, she believes her mom, who passed away years prior, is among the stars, comets, and meteors that she lovingly peers at from down below. Raised by her dad (Jim Gaffigan), he runs a slipshod legal practice that employs Viola Davis’ character, a no-nonsense paralegal named Rayleen.

One day, a NASA employee comes to town and promises the local Birdie troop (a stand-in for Girl Scouts) that they have a chance to represent the children of the world on the Golden Record that will be sent to other potential beings in the universe–they just need to win the top prize at the Birdie Jamboree next month. While the local troop of mean girls, run by school principal, Miss Massey (Allison Janney), don’t have much interest, Christmas clearly does. So, under the guidance of Davis’ reluctant character–who says she’s better equipped to deal with arsonists and murdered than children–she puts together rag-tag group of misfits to form their own troop in order to get enough badges to enter the competition, and make history.

Directed by Bert & Bertie, they add a bit of Moonrise Kingdom-esque flair to the proceedings, with no shortage of 70s pop hits and ample slow-motion–and, like Wes Anderson’s film, a climatic third act scene in the pouring rain. What will certainly be marketed as a central showdown between Davis and Janney’s characters, they chew the scenery like there’s no tomorrow. Miss Massey, who sneaks alcohol when she can, knowingly says “I’m playing” after every humorous insult that’s hurled at Rayleen and her troop. Meanwhile, Davis brings her brand of fierceness as she wrangles her girls (and guy, with Joseph) through trust falls, cookie selling, endurance tests, and wilderness survival over-nighters. There’s no doubt a delight in having these accomplished actors trade quips and barbs as they wrangle their troops, but it’s only late in the game that their shared past bubbles up, and a better film might have better laid this compelling foundation.

Writer Lucy Alibar, who finally returns to the big screen after writing Beasts of the Southern Wild, once again employs ample southern charm through her characters, most notably Gaffigan, who has a brief, but affecting role as a dad who just wants to do right in his own gruff way. There’s deeper themes hiding under the surface of her script such as the breaking the rut of past generations and forging one’s own path, but Troop Zero drowns in its cloying aim to please at every moment. It doesn’t bring anything new to the table, but that wouldn’t be a problem if its familiar heart and humor landed in any memorable way.