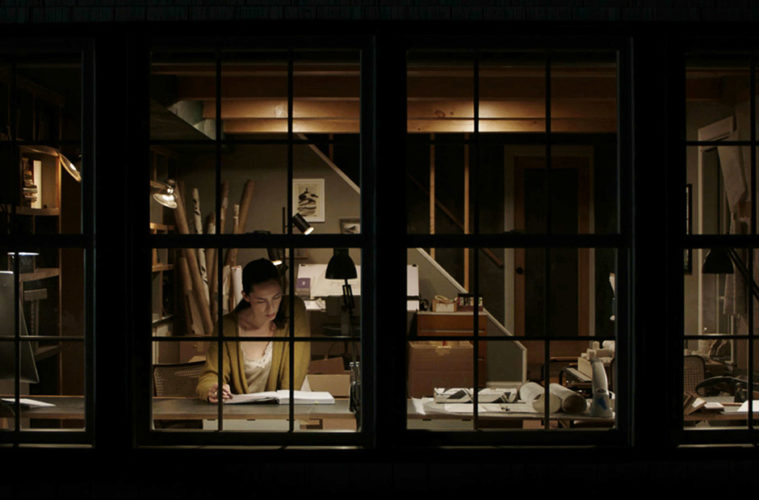 It’s about 20 minutes into The Night House that it finds its footing. The school year has just ended and Beth (Rebecca Hall), a high school English teacher, goes back to work to input a few more assignments. When a soccer mom type (Samantha Buck) comes in to contest her son’s grades, Beth isn’t having it, to say the least. She stares her down with a trace of empathy that manages to undercut her dead eyes and Hall, ever the solid actor, pinpoints and explores the sarcastic humor latent to the script. When mom continues to press her, Beth flatly explains that her husband, Owen (Evan Jonigkeit), has just shot himself. If this woman wants her son to get a B, he can get a B. It really doesn’t matter.

The scene continues from there, but this moment is the finest representation of what the script from Ben Collins and Luke Piotrowski does best. Somewhere between stretches of deep pain are specks of insightful, if unavoidable, humor. It’s a ghost story and a drama, a mystery, and a thriller. It’s not a particularly novel starting point, but The Night House moves slow enough—and has just enough self-awareness—to get by for the first half. Whether it’s because of the script or David Bruckner’s so-so direction, its attempts at eschatological dread don’t quite stick.

We first meet Beth upon returning home from the funeral. The home, mid-century modern and facing a lake, feels partly like it was constructed to invite spooky breezes in the middle of the night. Stuff goes bump in the night. Beth and Owen’s wedding song comes on the stereo. She might be sleepwalking or she might be hallucinating, but when she finds a picture of a woman who looks a lot like her on Owen’s phone, she jumps to the obvious: there must be some sort of presence. Her friend Claire (Sarah Goldberg) thinks she’s reading too much into it, but it doesn’t take long for her—or us—to know he had a secret life.

There are still inklings of the filmmaker’s previous works, albeit never to the extent he’s put on screen before. This is largely a good thing as the grating facetiousness of V/H/S is nowhere to be found nor is the explicit (or implicit) misogyny. There’s an adequately slick sense style by and large thanks to the production design as well as Elisha Christian’s cinematography.

Christian, who previously shot Columbus, is keen on wide shots and subtly undoing the sense of space he and Bruckner create. Some of it works, like how point-of-view shots looking outside sometimes lack inclusion of window frames to blur the line between interior and exterior. Some are a little less successful, like the pair’s use of close-ups that prevent a sense of space from accruing.

It’s something of a disappointment given the space they have to work with. Beth and Owen’s house, facing the lake and a self-made testament to their relationship, doesn’t have as much of an impact as it could have, and it also makes the movie a bit less fleshed out in its central arc.

It is par for the course before the meat of the story kicks it, yet it’s a sense of humor that grounds the characters in spite of their shortcomings. A select few, namely next-door neighbor Mel (Vondie Curtis-Hall), is a nice insert to flesh out the space between Beth’s personal and professional lives—that is, before he ends up being an exposition dump. The questions about Owen’s background start to unravel and the pacing slows to give it room to breathe, but what it does instead is stretch it out.

Rather, the main missed opportunity here is the retroactive exploration of Beth and Owen’s relationship. The script makes references to her struggles with mental health and the guilt that, just maybe, she was the straw that broke his back. Alas, Collins and Piotrowski don’t do much with that, forcing Hall’s performance and a select number of set pieces that keep The Night House chugging along. It just doesn’t know when to quit.

The Night House premiered at Sundance Film Festival and will be released by Searchlight Pictures.