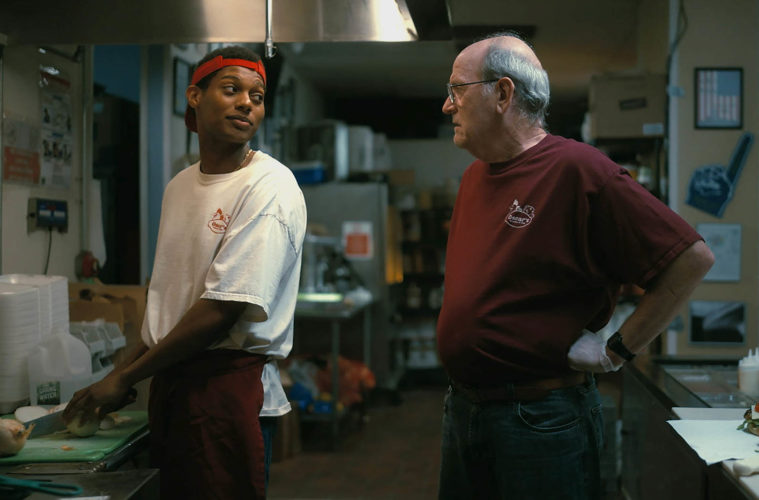 There is a scene in the middle of The Last Shift in which our two main characters–Stanley (Richard Jenkins) and Jevon (Shane Paul McGhie)–get into an argument regarding the tragic fate of a young African-American student who was killed many years before at the local high school. It’s the scene that seems to encapsulate the movie best. Jevon is a young, African-American man himself with dreams of being a writer. Stanley is quite a bit older, saddled with a sick mother down in Florida. He’s very proud of the work he does at Oscar’s Chicken and Fish, a fast-food joint in the middle of this small town of Albion, Michigan. After thirty-eight years, Stanley is retiring and passing off the reins of the graveyard shift to Jevon, who at first can’t be bothered to care.

It’s a promising premise that never really cashes in. Jenkins is doing nuanced work here, playing Stanley as a stunted sort. The kind of person everybody knows, perhaps a bit stuck in his ways thanks to a limited worldview. There are plenty of ticks and pauses and mannerisms Jenkins incorporates into the character. McGhie’s Jevon is purposefully opposite to nearly every way. Smart, charismatic, and outspoken, in the brief interlude wherein the two work together, Jevon opens Stanley’s eyes to some of the corporate manipulation that’s been going on at Oscar’s Chicken and Fish.

Jevon reveals to Stanley that after thirty-eight years he does not make as much as the hourly wage of new employees at other local chains. As these truths weight on Stanley, his prejudices begin to bubble to the surface. Written and directed by Andrew Cohn, The Last Shift attempts to pack a lot into its 90-minute runtime. With these dueling leads we are meant to confront much of the socio-political debate going on in our country at this very moment. In Stanley, we have a portion of America that has been convinced things are fine as they are, maybe a bit better way back when. Hard work is hard work and complaining about this or that will get you nowhere. In Jevon, we have someone a bit more nuanced. A young man who sees the angles and the cheat codes built into the system.

When confronted with these elements, Stanley chooses to refuse them. Cohn has a keen handle on each voice, though the breadth of the narrative struggles. As myriad conflicts converge in the third act, some resolutions come a bit too easy. That said, it’s a joy to watch Jenkins work and McGhie emerges as a capable counterpart. There’s a lot to admire here, even it all of it doesn’t work.