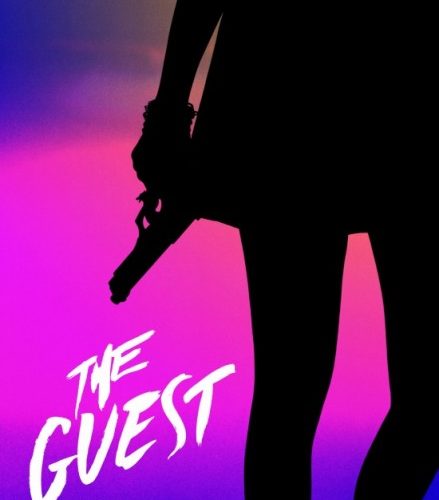 How blue can human eyes get? The question is answered succinctly in Adam Wingard‘s The Guest, a comfortably diverting riff on most all of the action/thriller elements from the ’80s that made performers like Kurt Russell bigger than life.

The Guest opens with a knock on the door. The woman answering the door is Laura (Sheila Kelley), the mother of Caleb, who was killed in Afghanistan. The man at the door is David (Dan Stevens), a too-handsome-to-be-real veteran with a message to deliver to Caleb’s family. Overwhelmed with gratitude by David’s act, Laura invites him into her home and makes him feel like part of the family, which also includes her husband Spencer (Leland Orser), daughter Anna (Maika Monroe) and young son Luke (Brendan Meyer). Before long, David is the man of the house, solving any and all problems with a devil-may-care smile and some extremely violent, extremely entertaining fighting techniques.

Throughout does the campy techno score blare (thanks to Stephen Moore, accompanied with smash zooms that practically swan dive into David’s cool blue pupils. This young solider is clearly not who he says he is, but what do we care. Look at that jaw line, those white teeth. Stevens is coming off of a successful run on Downton Alley, as well as a turn on Broadway in “The Heiress,” and is clearly looking to move forward in a new direction here. He owns the screen as David, finding the happy medium between charm and menace. Wingard makes good use of the man’s physicality, building clean, well-choreographed fight sequences that move quickly but never lose focus. It’s when the guns start a-blazing that the movie loses some of its luster.

Too early are David’s origins revealed and not nearly enough is done with the information. What follows soon dissolves into something that feels a bit more familiar than we’ve come to expect from the creative minds of Wingard and screenwriter Simon Barrett.

Still, Stevens and Monroe emerge as very valuable lead performers, playing a fun game of cat-and-mouse that rises above some of the more formulaic moments in the second half of the film.

At the very least, The Guest makes a strong case for Wingard as our next great action director. The man clearly knows the rules of the game and how to subvert them. The energy’s there in Wingard’s frame — let’s hope for a bit more narrative boldness the next time around.

The Guest premiered at Sundance Film Festival 2014. One can see our full coverage of the festival below.