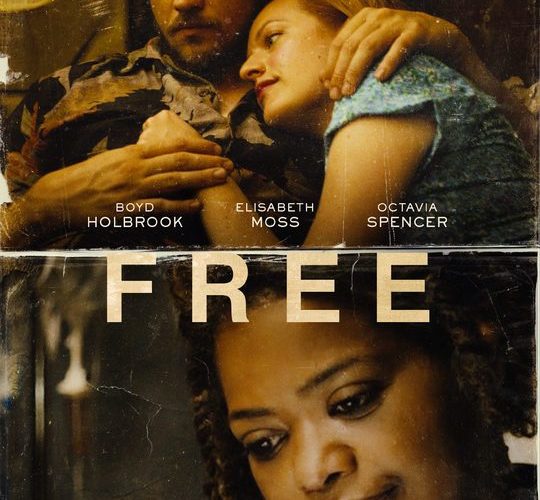 The greatest southern gothic tales feature richly detailed atmosphere dripping with a strong sense of location. Night of the Hunter and other classics certainly fit the category, and the fairly recent Sundance drama Ain’t Them Bodies Saints was a fine example, featuring characters that, whether in a doomed romance or not, feel destined for one another. On paper, The Free World seemingly has all the necessary ingredients, yet the drama stumbles out of the gate with cliche after cliche, even when it tries to change things up with a sharp dramatic turn.

Beginning as a study of rehabilitation, Mo (Boyd Holbrook) recently got out of a prison stint in which he became defined as the toughest inmate, earning the nickname “Cyclops.” Working at an animal shelter under the tutelage of Linda (Octavia Spencer), he cleans cages and shows a tender care for the battered animals brought in. One day, Doris (Elisabeth Moss) brings in her dog Charlie, seemingly beaten by her aggressive hothead police officer husband.

A few nights later, Mo discovers a bloodied and bruised Doris crying outside of Charlie’s cage. As she’s in a bewildered state, he brings her to his sparely furnished apartment, made up of little more than an sole mattress, lamp, and chair. What begins as a violative relationship abruptly — and unconvincingly — shifts to something more personal, particularly when a few turns are thrown into the mix.

Sporting an affected southern drawl, Holbrook is the most impressive of the leads, playing a character once named Martin who is now practicing as Muslim after being turned off of the promises of Christianity. When he’s not spouting off didactic phrases, he does lend a empowering presence to the frame. Moss’ character, also attempting to forge a genuine human connection after a life of abusive dominance, occasionally shows glimmers of recognizable humanity. They both try to do the best with the material, but are perpetually brought down by a myriad of trite truisms. The script’s lack of specificity doesn’t make the story more universal, but rather fails to persuade us to engage with the characters in the first place.

As the story evolves from a relatively grounded drama to an on-the-run thriller, massive leaps in emotional logic are taken. Mohammed puts his life in the line for the Doris even when their supposed mutual affection barely registers. Meanwhile, their over-reaching platitudes attempting to convey their psyche’s current state come up ineffectual.

With an environment as ugly and cynical as the one presented here, there isn’t any redeeming emotional truths ultimately revealed or a message to take away, and it’s certainly not interesting enough to be a cautious character study. Despite actors who are clearly committed to the material, The Free World is an unfortunate misfire of banality.

The Free World premiered at the 2016 Sundance Film Festival and opens on September 23.