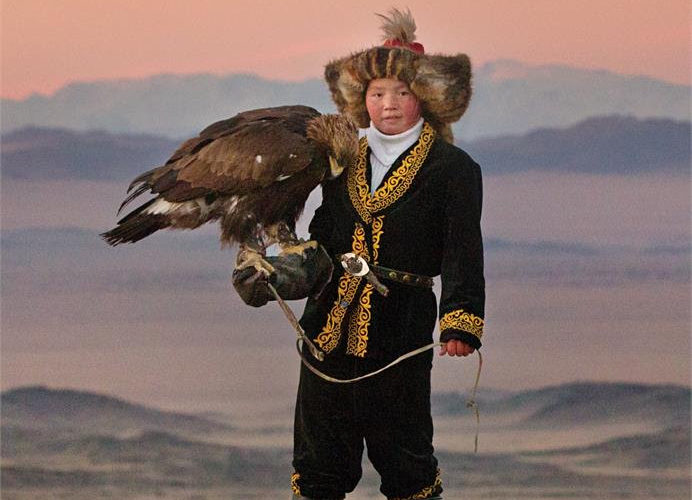 For seven generations, the men of Nurgaiv’s family have mastered the art of eagle hunting, a tradition in western Mongolia that goes back some 2,000 years. For the Kazakh people of the Altai region, it is a practice that is not only crucial to their survival in the remote area, but also a badge of honor and expertise in the long-held tradition. Inspired by her father, Nurgaiv’s daughter Aisholpan has taken an avid interest in the craft with hopes of tearing down the boundaries of cultural sexism and becoming the titular, first-ever The Eagle Huntress. In capturing her passion, her family’s encouragement, and the societal roadblocks ahead of her to overcome, director Otto Bell has created an empowering, gorgeously shot documentary.

The 13-year-old Aisholpan leaves her secluded home five days a week to live at a dorm attending school, where she has dreams of becoming a doctor. When she’s not wrestling her male schoolmates (and defeating them) in extra curricular activities, she’s studying by flashlight in her home on the days off. It’s here where she cultivates her admiration for her father’s falconry skills and decides she will become the first female to take part in this tradition. While her father’s ceaseless support is beautiful to witness — he tells her she’s as “brave as any man” he knows — this is against the wishes of the close-minded males in the trade, who believe a woman’s place is in the kitchen and it’s “too cold” for them in the mountain region.

As Aisholpan climbs the ranks through a riveting competition with over 70 seasoned eagle hunters, she begins to make a name for herself in the community. Rather than portraying just the incredible feats she’s able to pull off, Bell also captures her femininity. In perhaps the film’s best shot, we see her putting on “Sugar Shimmer” nail polish next to bloody bone she recently fed her eagle.

Along with Aisholpan’s enduring spirit, The Eagle Huntress excels in portraying the beauty and respect the people here have for both the animals and environment. With Simon Niblett‘s soaring cinematography, using a mix of eagle-mounted GoPro cameras and drone footage, there’s both an expansive and intimate sensory rush when we see Aisholpan in action.

While some of the music choices can feel too manipulative in certain climactic situations, and the direction a bit artificial, the underlying bravery and determination running through every scene of The Eagle Huntress makes it one of the year’s essential documentaries. Executive produced by Daisy Ridley, for any girl that found inspiration in Rey, Aisholpan offers a real-life, profoundly inspiring testament to disregard age-old societal constraints and forge ahead with your passion.

The Eagle Huntress premiered at the 2016 Sundance Film Festival and opens on October 28.