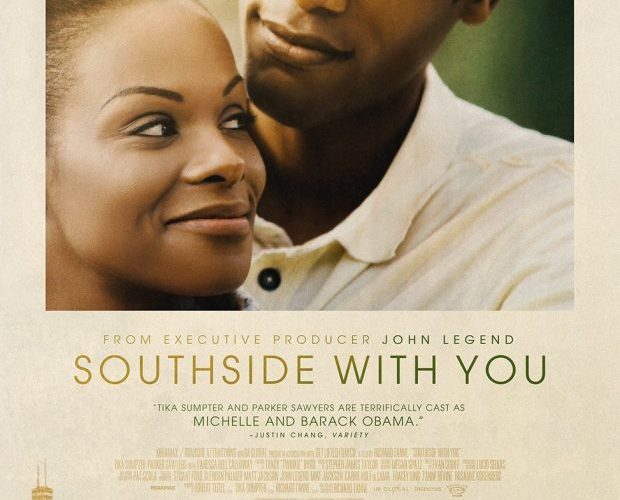 [Sundance Review] Southside With You

Arriving just in time for the end of the Obama era, Southside With You depicts a history-changing summer afternoon in 1989 in which our future national leader took Michelle Robinson out on what would become their first date. Barack Obama (a convincing Parker Sawyers), working at a corporate law farm as an associate from Harvard Law, persuades his co-worker Michelle (Tika Sumpter, also a producer here) to attend a community meeting, which is not a date, according to her. Writer-director Richard Tanne understands that this would be difficult to pull off if it didn’t work as a romantic drama first and foremost. Injecting personality and flair with a soulful soundtrack and warm cinematography form Patrick Scola, Southside With You impresses with its vision of a lower-class Chicago and a sincere emotional center. Even with a known outcome, it’s compelling to see the burgeoning relationship between these individuals as they sport authentic chemistry. While the script does tend to wink a touch too much to try and encapsulate Barack’s future, with this narrow of a scope, seeing the two debate over ideas and predilections has its allure.

Picking her up in his crappy car with a missing floorboard, the chain-smoking, confident, and slightly pompous Barack takes her around the South Side of Chicago as they venture to a museum, park, community meeting, and a showing of Do the Right Thing, all while diving into their own beliefs on racism, religion, upbringing, music and ice cream. The most direct signifier of Barack’s future comes with the local community meeting. Michelle meets those that greatly respect him, including the mother of a son in the Navy, who Barack inspired to join as a father figure of sorts. She then sits down to witness his eloquent pragmatism in a speech on steps needed to make genuine change in the community but evaluating the needs of the opposing side.

While this is the only scene truly needed to show his presidential skills to be, Tanne lets the romantic connection sag when he steps too far into some obvious foreshadowing. After Barack tells a painful story about his late father, who was estranged living in Kenya, Michelle says if he somehow has enough money one day, he should engrave his head stone, which his family was too poor to do. It also doesn’t help that Michelle registers a bit underdeveloped when compared to Barack, who Sawyers plays with unceasing charisma.

In a news cycle which can often make our leaders seem like impassive mouthpieces, Southside With You exceeds in humanizing them. Most nuanced and effective in the feeling of getting to know someone the first time, when the evident foretelling is put to the side, this is simply an absorbing love story.

Southside With You premiered at the 2016 Sundance Film Festival and opens on August 26.