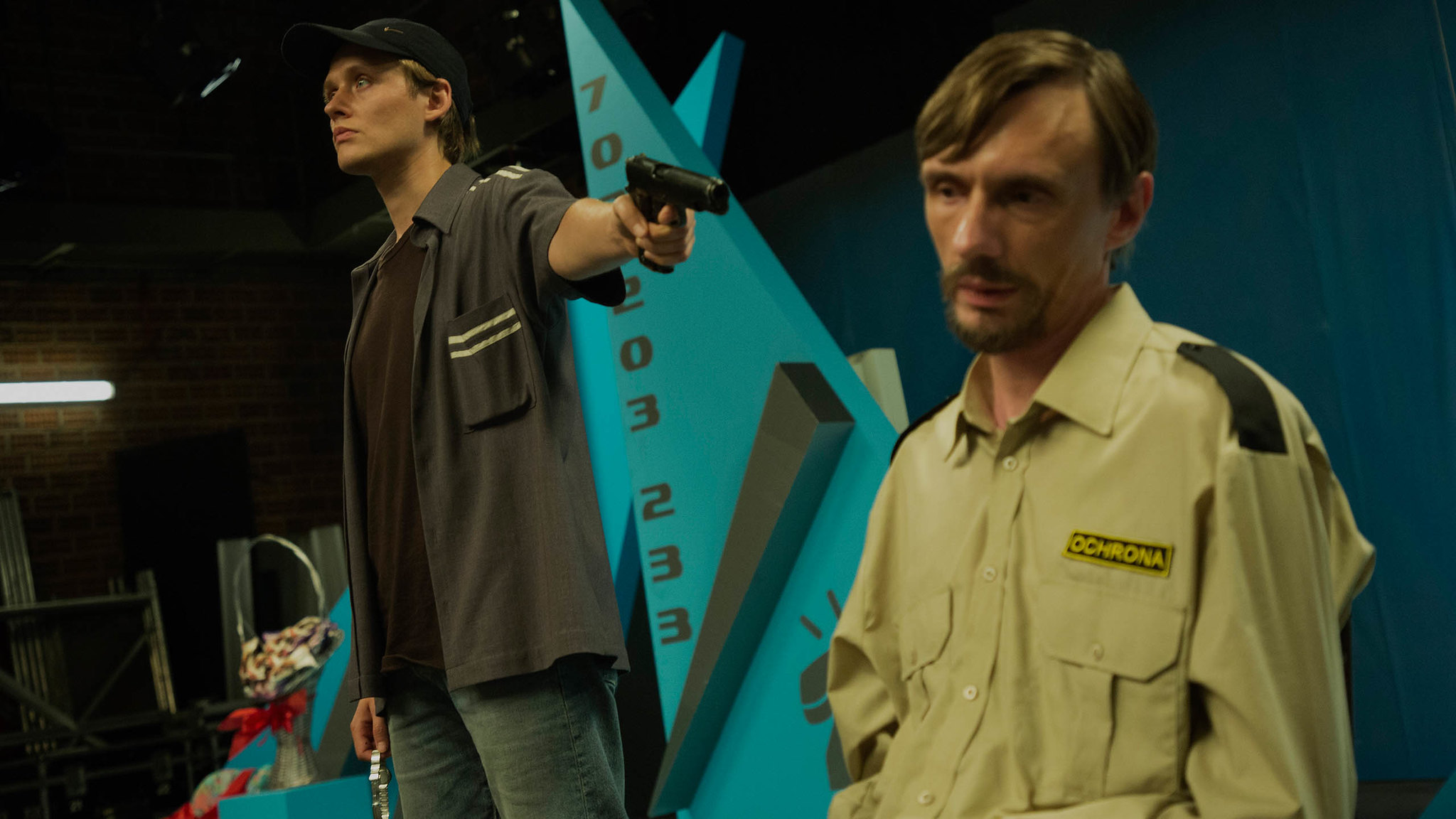 Pop culture, entertainment, hedonism—they’re all different sides to the same brain atrophy. Well, that’s how Sebastian (Bartosz Bielenia) sees it. He’s a 20-year-old kid with a statement to prove and he isn’t above going postal to do it. The main wrinkle in his plan is that he needs other people to see it, and everyone else is too busy ringing in the new millennium. Yep, there are only four hours left of 1999 in Warsaw when Sebastian enters a television studio with a gun and a backpack. Soon enough, he also has two hostages. One is the TV host, Mira (Magdalena Poplawska), the other a security guard (Andrzej Kłak).

But while this sort of pressure cooker seems like it’d play out in real-time, it doesn’t. This standoff goes on for four hours, but Jakub Piatek’s Prime Time is only 93 minutes including credits. Maybe Piatek & Lukasz Czapski’s script should have unfolded in real-time. Maybe then it would’ve actually accumulated tension instead of losing it every time it skips ahead in the narrative. Add in the truth that this has nothing deep to say about pop culture, the turn of the millennium, or its own characters, and the movie plays like a treatment forced into feature-length.

Instead, it plays kind of like the main character’s own scheme. It has a few disparate themes, a basic motivation, and not much more. Each character, including those who call in to try to deflate Sebastian, has one or two traits and nothing more. Sebastian himself is a hollow mix of unloved man-child and Unabomber ethics, neither of which point to any larger implications in a salient way. There’s a scene where his father (Juliusz Chrząstowski) tries to talk some sense into him, but interactions like these seem to always end before they begin.

This might be forgivable if Prime Time actually plumbed its topics, but it seems to think broad implications are the same as social commentary. The studio setting, which seems ripe for some sort of meta approach given the themes of pop culture, feels perfunctory. The presence of technology is effective at points because it’s so sparsely realized, but it doesn’t point to anything greater. All the while, the film cuts back to live footage of civilians at their New Year’s Eve parties, as if simply referencing the millennium is enough. Alas, it isn’t. There’s an idea there, but the script doesn’t have the intensity or weight for these juxtapositions to mean much.

The cast does what they can here, though. Bielenia at least distracts from how basic and whiny Sebastian’s motive is, and the others capture a droll sense of humor in the early scenes. It’s just too bad nothing really adds up. It’s not even that well-paced give how short it is. It’s really only when Prime Time leans into how inherently anticlimactic it is that it finds a tone worth exploring, but like almost every interaction that precedes it, those moments end before they begin.