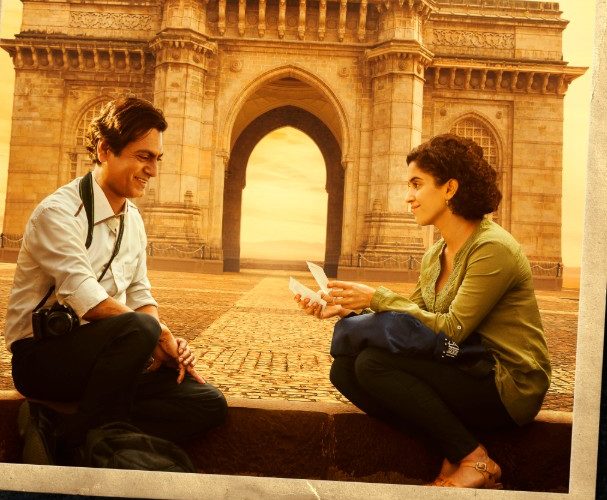 Street photographer Rafi (Nawazuddin Siddiqui) makes a living snapping tourists in front of the Gateway of India. He has a simple sales pitch: the sun you feel, the wind you hear, and the people around you will be gone when you leave, but you can keep the feeling with a single photograph. This detailed attention to the environment is also the greatest strength of Ritesh Batra’s Photograph, a lush, willfully low-key romantic drama that explores the age-old tale of how the class divide is a barrier for what the heart may desire.

Miloni (Sanya Malhotra) is a timid, charming student working towards her certification as a chartered accountant. One day she agrees to have her photo taken by Rafi, who takes a liking to her and is pressured by his social circles–and especially his grandmother–to find marriage. When Miloni agrees to be presented as his hopeful bride under the guise of placating his grandmother, their connection shifts from a fabrication to something, of course, more genuine.

Taking full of advantage of their widescreen frame, cinematographer Ben Kutchins captures the frenetic chaos of Mumbai with all of its consuming traffic, sun-dappled streets, and tightly-packed food carts. The precise sound design also bolsters the palpable feel of the location. As Miloni receives jewelry from Rafi’s grandmother, the sounds of shimmering metal in her hands transitions beautifully to it rustling in the bag as she walks down the street. It’s this attention to detail that makes up for a story that can’t help but feel slightly inert.

Throughout Photograph, Batra shows a sensitive touch and a patient eye for the subtle rhythms of human connection not dissimilar to that of Andrew Haigh. (Interestingly enough, their recent films The Sense of an Ending and 45 Years tackled similar thematic territory.) While it is certainly consistent to have every scene register in roughly the same subdued tone, one wishes Batra dug a bit deeper into Miloni’s arc. Her affectation for Rafi is one conveyed through few words and knowing eyes, exemplified in an early encounter on a bus where not an utterance is exchanged. As their relationship blossoms, Batra impressively doesn’t provide the expected narrative catharsis, yet even with what we’re given, there’s ultimately not a great deal of emotional impact to be felt.

As the plot lulls along in a muted fashion, our eye and ears become more attuned to the distinct directorial decisions being made. In the first half of the film, Batra shows Miloni’s time at home strictly from her point of view, the camera locked in close to her face. In a clever choice, when her lower-class servant learns of her relationship with Rafi, the perspective switches to hers from across the room to the naan on the stove being prepared as if we’re being let into an entirely different world.

This class divide is subtly woven into the film through comments on skin color (Compared to the lighter-skinned Miloni, Rafi has become “black raisin,” according to his grandmother, due to his financial need to be outside), English language being interjected in conversations with the higher class, and exchanges with cab drivers over loyalty to a shared plight. When Miloni is proposed the first steps to an arranged marriage, her potential husband is caught off-guard when she just wants to live in a village so she can farm and take afternoon naps.

Batra is clearly a filmmaker keyed into these simple pleasures of life and invites us to luxuriate in them throughout Photograph. Despite an unsatisfying culmination to this tale of proscribed romance, it’s hard not to feel a warm affectation for his humble approach to filmmaking.

Photograph premiered at the Sundance Film Festival and opens on May 17.