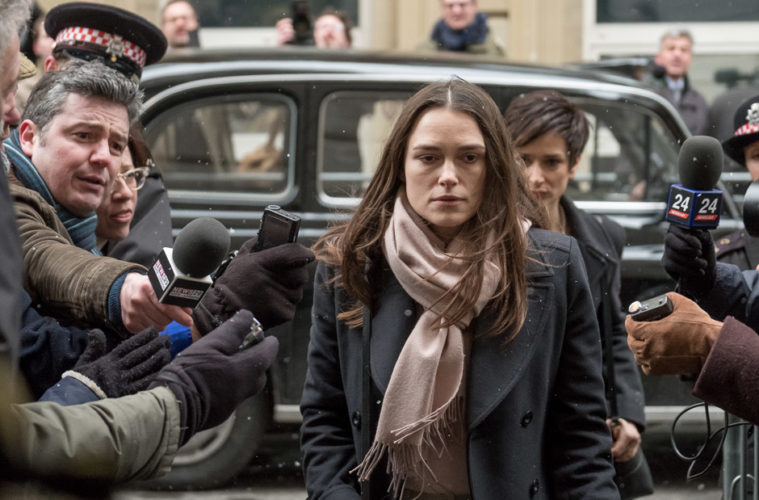 In January 2003, British government employee Katherine Gun was emailed a memo that requested she, and those she worked with at the GCHQ (Government Communications Headquarters), listen in on the UN offices of six nations: Angola, Bulgaria, Cameroon, Chile, Guinea, and Pakistan. These countries held the crucial swing votes on the approval of the invasion of Iraq. Regarding this ask as illegal, Gun leaked the email to a friend with connections to The Observer. The information goes public and Gun’s life changes forever as the government charges her under the Official Secrets Act of 1989.

Directed by Gavin Hood and starring Keira Knightley as Gun, Official Secrets digs into this story with plenty of aplomb if not enough urgency. Such a languid pace at which this movie operates! Running at nearly two hours, the script (by Hood, Gregory Bernstein and Sara Bernstein, based on the book “The Spy Who Tried to Stop a War: Katharine Gun and the Secret Plot to Sanction the Iraq Invasion” by Marcia Mitchell and Thomas Mitchell), spends an admirable amount of time in its first act developing Gun as a character. Unfortunately, this is done at the expense of the overall narrative. Simply put, Official Secret never picks up the pace.

Knightley is doing strong work as always but it is not enough. Likewise, Adam Bakri steals a scene or two as Yasar Gun, Katherine’s immigrant husband who is affected by her actions. The roster at The Observer is incredibly impressive and woefully underutilized. Whether it’s Matthew Goode, Matt Smith, or Conleth Hill, these are accomplished Brits left to do little more than discuss journalistic ethics, the reliability of certain sources, and the like. Exchanges in this realm have been done before and done well in pictures like All The President’s Men, The Paper, and, more recently, The Post. Here, Hood seems unwilling to move the camera or frame his subjects in a dynamic way. A perfunctory score from Paul Hepker and Mark Kilian does not do much to help.

The film’s best scene comes as Gun connects with a group of lawyers determined to clear her name, including Ralph Fiennes and Indira Varma. Fiennes shows up halfway through this thing and runs away with all of it. Playing Ben Emmerson, a British lawyer with a focus on human rights law, the actor plays his real-life character a tad eccentric though entirely believable within the world. Knightley and Fiennes play off each other brilliantly in their few scenes together, leaving this writer longing for deleted scenes of conversation between the two. The story inside Official Secrets is one worth telling, but perhaps it would be better to read the book.

Official Secrets premiered at the Sundance Film Festival and opens on August 30.