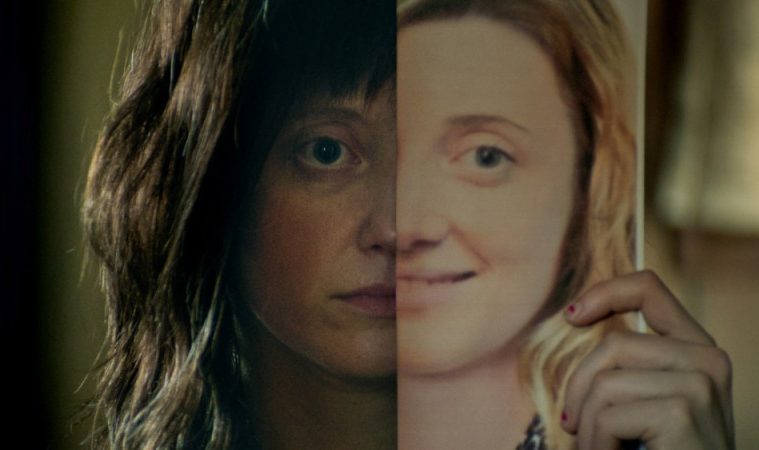 Rare is it that one gets to see a performance as strong as Andrea Riseborough’s in NANCY. Written and directed by Christina Choe, the film concerns a thirty-something woman living in Oswego, New York who begins to suspect she was abducted when she was a child.

Following the death of the woman that raised her (Ann Dowd), the titular Nancy reaches out to a couple (J. Smith-Cameron and Steve Buscemi) whose daughter disappeared thirty years prior, as she learns from the local news. Cautious but hopeful, they take in the young woman while they attempt to confirm she is their long-lost child. What they don’t know about her will soon cloud circumstances and complicate the visit.

Choe keeps things spare and lets her actors do most of the work here. Smith-Cameron and Buscemi play off each other beautifully, she enamored by who Nancy could be, he closed-off and unwilling to believe it. Set in winter deep in New York state, the chill seeps into each and every frame. Immense credit goes to cinematographer Zoe White, who wrings the setting out for all it’s worth. A haunting score by Peter Raeburn drives the narrative in its more pensive moments. Though the film burns slow, these formal elements keep up engagement without much of a problem.

Riseborough has been around and good for a long time, but this feels like a major step forward for the actress. Between the strange black hair, the crooked, awkward grins and the wide, revealing eyes, her Nancy is hard to forget. Rarely speaking above a mumbled whisper, Riseborough lives inside this character with such depth that’s it’s easy to get lost in each moment. Consider one scene in which she begrudgingly has her photo taken. Without a word, we feel everything in her mind. Reluctance, fear, flattery. It truly is astonishing stuff.

Choe shows a deft hand in her brevity and economy of action. So little happens yet it matters so much. The tension of impending DNA results maintains while we make compromises in our viewer minds as we watch the fractured couple do the same. A couple of conveniences pop up to muddle motivations (including a jarring hunting accident) and they never fully gel to the larger mystery. Ultimately, it’s all about watching these three performers work off each other and find an earnestness between them. This alone is more than enough reason to celebrate NANCY.

NANCY premiered at the Sundance Film Festival and opens on June 8.