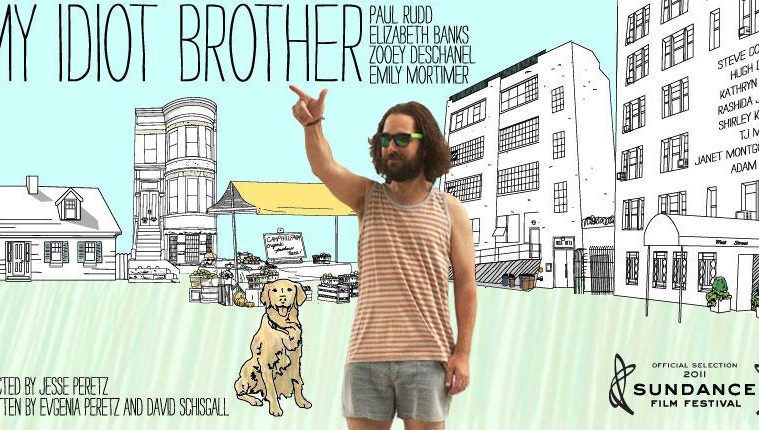 Arrested for selling marijuana to a police officer (he’s not undercover, mind you), Ned’s parole officer introduces himself slowly, pronouncing each syllable deliberately. When Ned asks why, the parole officer explains he’d just assumed Ned was retarded because of how he went about getting arrested.

He’s not far off. Ned’s a nice guy, living in a mean world. It’s a thin, punchline of a character that Rudd rather incredibly breathes life into for 100 minutes. His inherent charm matched with a smart, tight script by Evgenia Peretz and David Schisgall offer plenty to smile at and just enough to laugh at. It’s nowhere near as thematically-ambitious as Judd Apatow’s Knocked Up or dramatically-forced as Funny People. Much like its hero, the film’s comfortable with exactly what it is.

Once released from jail, Ned is soon crashing with his three sisters (Banks, Mortimer, Deschanel). Banks plays Miranda, a high-strung journalist with a low-strung neighbor, played by the scene stealing Adam Scott. The man cannot appear in a film without claiming some of  its funniest scenes, even if he’s on screen for only 5 minutes. In this case, a girl-gazing luncheon with the kindly Ned takes the cake.

Mortimer’s Liz is a mother married to a stick-in-the-mud British husband (Coogan). Though the actress is visibly, and sadly, given the least to do, she’s perfected this kind of performance by now, i.e. Lovely and Amazing. Finally, Deschanel plays Natalie, the free-spirit of the family, complete with a lesbian-lawyer girlfriend (Jones) and a worrisome attraction to a cult-following artist (Dancy). Not unlike Scott, Jones shines above the rest in a scene involving dog-theft. Thanks must also be given to costume designer Christopher Peterson, who adorns Jones’ Cindy with face swallowing glasses, smartly separating her character from the slew of other beautiful, talented actresses running around.

Thanks to his unabashed honesty, Ned is systematically kicked out of all of siblings’ homes as their own personal conflicts begin to surface. At times, the countless half-subplots lose focus, such as one scene where Dancy’s cult-follower takes Natalie and Ned to a meeting. What results is the kind of physical comedy more appropriate in broad studio fare.

And though the narrative be somewhat aimless, it’s final destination is heartfelt and honest to a fault. Ned’s refusal to get down never becomes annoying or pretentious. There’s no grand message here and very little satirical bite. Right is right and wrong is wrong, and the gray area in between is easy to navigate if you’re someone like Ned. But then, Ned’s one of a kind.

Are you a Paul Rudd fan? Will you get in line to see this one in theaters?