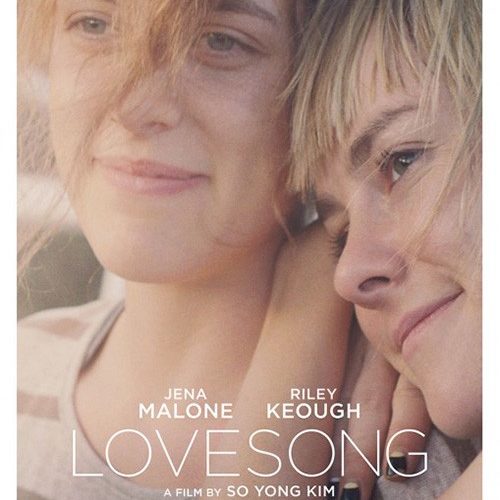 Tender and haunting, So Yong Kim’s Lovesong is a carefully observed, nuanced character study beautifully written, directed and edited. Much of the action, like in her pervious features In Between Days, Treeless Mountain and For Ellen occurs at the edge of the frame. Exploring the bounds of motherhood, childhood and maturity, Lovesong is an impressive and observant feature in which Kim allows the relationships the breathing room they require for authenticity.

Riley Keough stars as Sarah, a young mother who married too young. The director’s own daughters Jessie Ok Gray and Sky Ok Gray, play daughter Jessie at ages 3 and 6, respectively. Lonely and transplanted to the suburbs from the city by her absent husband Dean (played by filmmaker Cary Joji Fukunaga in a Skype cameo), she finds herself on the edge of depression. An old college friend Mindy (Jena Malone) re-enters her life and the three go on a roundtrip to the Poconos where old secrets are revealed.

Deliberately paced, filmmaker Kim achieves real intimacy in two actresses playing against type. Keough, star of Mad Max: Fury Road, is stripped of glamour, rather taking on a realistic portrait of a woman emotionally in over her head. Malone embraces her character of a wild child with great enthusiasm as the two trade sexually explicit stories and jokes that eventually reveal suppressed emotions. We learn Sarah has had limited sexual experience beyond Dean, chickening out on a threesome with Mindy in college. Feelings are rekindled that may have never been acted upon or may have not been present and fully understood at the time. Sarah and Mindy find themselves attracted to each other, edging towards and eventually crossing the line of platonic love into romance.

The film itself functions as an ode to forbidden love and friendship. Told in two sections, four years apart, we find Mindy in Nashville on the verge of getting married. Estranged since the road trip, Mindy finds she is good at faking stability. She no longer sneaks off to flirt with cowboys at wild west shows. Sarah finds herself on the outs amongst Mindy’s bridal party including her maid-of-honor (Brooklyn Decker), despite her participation in a drunken bachelorette party. The later act keeps Sarah at a distance as she adapted to her isolation that comes with de-facto single motherhood.

A film about self-discovery, it is a far less straightforward lesbian romance than Todd Haynes’ brilliant and heartbreaking melodrama Carol. Internalizing through a sparse narrative, Lovesong is a rare film of mature, emotional complexity anchored by two remarkable and beautiful performances.

Lovesong premiered at the 2016 Sundance Film Festival and opens on February 17.