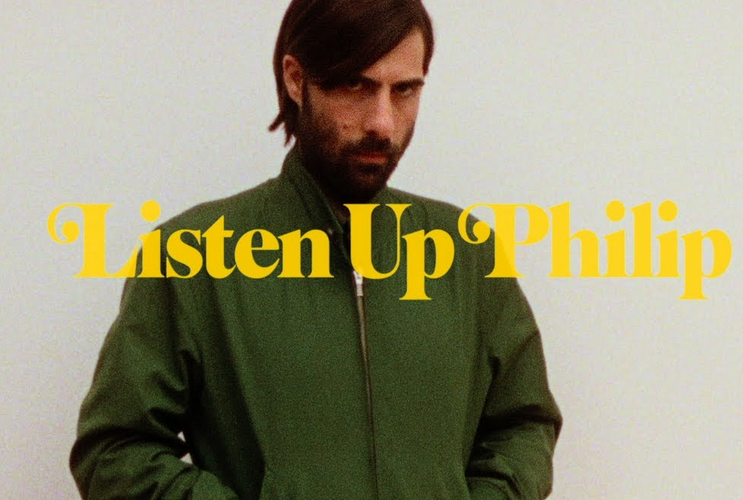 When a film follows a despicable character acting out despicable things, it takes a careful balance in both the direction and the writing to give an audience any desire to explore his or her life. Thankfully, Listen Up Philip, the latest drama from The Color Wheel writer-director Alex Ross Perry, excels in both categories. We open on our title character, played by Jason Schwartzman, gloating about his new novel to an ex-girlfriend and, then, attacking a handicapped former friend on his life choices, all while Eric Bogosian‘s inimitable narration provides another perspective to our protagonist’s narcissistic worldview.

Preparing for the release of his second book, we soon learn that Philip Lewis Friedman’s relationship with his girlfriend, Ashley (Elisabeth Moss), is winding down, but he’s perhaps oblivious to the situation. As he decides to skip a nationwide press tour for his latest book, opposed to his publisher’s own behest, Philip opts to get out of New York City to clear his mind for writing. He finds a connection with a once-famous author, Ike (Jonathan Pryce), who teaches upstate. So, without the approval of his girlfriend, he makes his way up north for the entire summer.

Featuring wall-to-wall dialogue, Listen Up Philip is a dense work with an unexpected structure. While much of the first act is dedicated to our title character, Perry also segues to Ashley’s life in the city without her egotistical boyfriend, giving us insight into both how their relationship was formed and her freedom without him. We also jump to Ike’s undesirable romantic life after the disregarding of his family, foreshadowing where Philip may be headed decades later.

While these asides provide intriguing layers, they aren’t as engaging as when Schwartzman is on screen, delivering one of his best performances by saying absolutely anything on the character’s (or Perry’s) mind, usually resulting in a torrent of unbridled self-absorbed thoughts. We may never want to hang out with this character in real-life, but when it comes to a portrait of an easily fractured creative attempting to stay true to his ideals, this is about as accomplished as a film can get.

With a touch of Woody Allen (the idiosyncratic narration, the alluring, intimidating portrait of New York City, and a jazzy score from Keegan DeWitt), John Cassavetes (the off-the-cuff, seemingly untamed Super 16 mm cinematography from Sean Price Williams, shot almost solely in tight, intimate close-ups), and Noah Baumbach (the involving look at a self-involved protagonist), Alex Ross Perry certainly offers a nod to a handful of directors, but has crafted something wholly his own with Listen Up Philip. With a major step up from The Color Wheel in scripting and style, the Brooklyn-based helmer is quickly becoming one of independent cinema’s most refreshing voices.

Listen Up Philip premiered at Sundance Film Festival 2014. One can see our full coverage of the festival below.