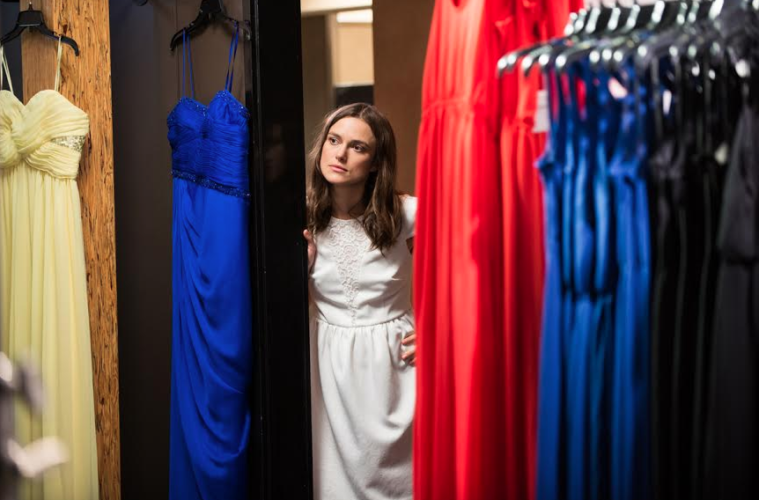 Returning to the Sundance Film Festival for the third consecutive year, Lynn Shelton has risen in the ranks since her debut Humpday, attracting major names for her small-scale dramas. Her latest, Laggies, follows twenty-something Megan (Keira Knightley) and her struggle to take the next steps in her life. Those steps include getting a new job committing to her long-time boyfriend Craig (Mark Webber), as well as finding a new set of friends, from whom she’s recent grown apart.

At the wedding of her close friend (Ellie Kemper), she gets proposed to by Craig and sees her father (Jeff Garlin) cheat on his wife, which causes her to storm off. After arriving at a local grocery store, she’s greeted by Annika (Chloë Grace Moretz) and her posse of teenage friends, who nominate Megan to purchase them alcohol. Having had the favor done for her at the same age, she pays it back and then decides to hang out with them deep into the night, forgoing her wedding responsibilities as a bridesmaid. After arriving home and making up an excuse for Craig, he pops the question and she accepts the proposal, but before they elope in Las Vegas she promises to go to a week-long, career-focused seminar to get her life in order. On the way, she gets an urgent call from Annika to pose as her mother at a parent-teacher meeting, which then absurdly turns into her skipping the seminar and spending a week with the 12th grader.

While the first act lies in the realm of plausibility, Laggies soon goes off the rails, its plot becoming more contrived and characters increasingly erratic. Megan is a destructive individual, whose actions hurt those around, yet Shelton is intent on relying on a feel-good tone and letting her lead routinely get off the hook. While the overall themes and messages at hand are off-putting, the film does contain a handful of strong performances and entertaining scenes.

Sam Rockwell provides an offbeat comedic presence as Annika’s father, but unfortunately his character gets the short of the end stick. Knightley (sporting her best American accent yet) and Moretz work well off each other, making way for some of their better performances as of late, and Short Term 12‘s Kaitlyn Dever shines in all-too-brief supporting turn. While individual scenes provide laughs and even a few moments of sincere drama, overall Laggies is an uneven, cloying experience centered around a story that gives little reason why it should be told. With Shelton giving the script duties over to another screenwriter (Andrea Seigel) for the first time in her career, hopefully her next film will feature a return to authentic drama.

Laggies premiered at Sundance Film Festival 2014 and is expected to be released this summer. One can see our full coverage of the festival below.