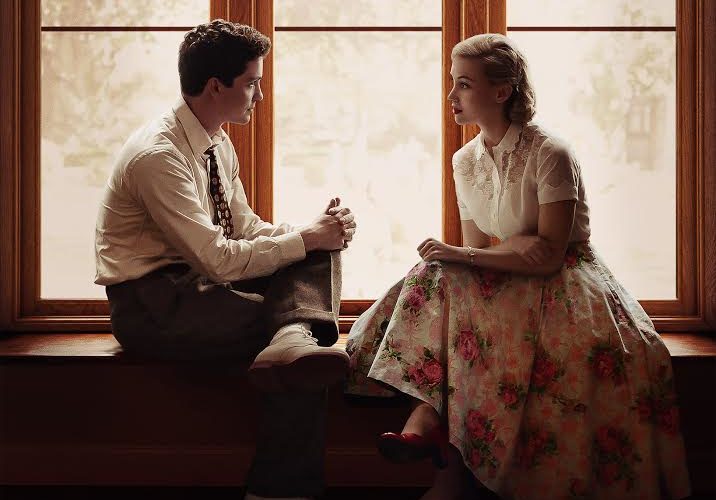 After helping filmmakers such as Todd Haynes, Ang Lee, and Todd Solondz shape their careers, James Schamus has finally made the leap from producer to director with an adaptation of Philip Roth‘s 2008 novel Indignation. The 1951-set feature follows Marcus Messner (Logan Lerman), a Newark-bred Jewish teenager heading to his first semester at a Lutheran college in Ohio. In doing so, he avoids the draft for the Korean War, which is claiming extended family and friends as victims. While a morally sound, eloquent, and confident individual, at college he grapples with sexuality and a distinct indignation, primarily inflicted by Dean Caudwell (Tracy Letts).

This is the sixth feature to adapt a Roth novel (Schamus is also on screenwriting duties), and in a post-screening Q&A one of the film’s producers read an e-mail from the author, who found Indignation to be the most faithful and truthful adaptation of his work. Indeed, after a fairly jumpy, routine first act settling us in, Schamus wrings out the vigorous dialogue by letting a standard plot fall by the wayside and have the film luxuriate in a number of spectacularly heated conversations.

Among the first sequences of note is Marcus taking out alluring classmate Olivia Hutton (Sarah Gadon) on a date. In opposition with the buttoned-up formality of the era, and most certainly of the strict campus, Olivia is a firecracker of personality, sexually advancing on Marcus in ways that readjust his entire mindset. When the darkness of her backstory is slowly unveiled, it only makes Marcus more intrigued, much to the consternation of his parents. Though still trying his best to focus on studies, his roommates — one “cultured” in the arts (Ben Rosenfield) and the other with a tough, distant personality (Philip Ettinger) — make it impossible, so he requests a room change, resulting in the worst dorm on the campus.

This perturbs the Dean, who wonders why Marcus, despite being studious and highly intelligent, can’t resolve a simple conflict, and it leads to the most brilliant scene of the film: a 15-minute bout of verbal sparring in the Dean’s office. In touching on topics of religion, upbringing, education, philosophy, and everything in-between, they continually one-up each-other as they sublimely go toe-to-toe. Schamus, clearly skilled in the director’s chair, gradually frames the opposing sides closer and closer as the eloquently literate conversation intensifies.

This is the finest performance yet for Lerman, who sports a convincing New Jersey accent and displays both an endearing charm and simmering irascibility as he steadfastly sticks to his ideals upon being confronted by both the Dean and Hutton. Meanwhile, Gadon is illuminating as Hutton, initially causing Marcus to be smitten with a simple glance at her legs. She blossoms from a ravishing enigma to a more tragic individual, her arc eventually concluding on a heartbreaking revelation.

Shot by Christopher Blauvelt, the warm aesthetic approach is not dissimilar to last year’s Sundance hit of the same era, Brooklyn; Jay Wadley‘s beautiful piano and string-heavy score adds a blissful touch as well. Indignation is a thoughtful examination of romantic courtship and educational routines that’s best when its writer-director prioritizes characters over plot. As punctuated by a dark, transcendent ending, Schamus captures many wistful echoes of an era long past.

Indignation premiered at the 2016 Sundance Film Festival and opens on July 29.