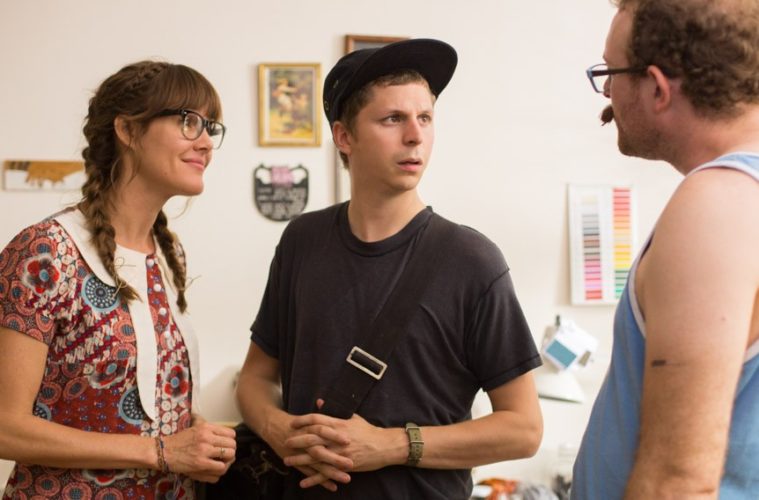 Comedian David Cross, best known for his work on Mr. Show and his role as Tobias Bluth in Arrested Development, makes his directorial debut with Hits, a scornful satire about hipsters and fame-seeking idiots. Set in upstate New York, the film weaves together several different characters who have unusual expectations of reality and what they are entitled to simply by being American. This film is a scathing critique of modern society in the post-internet era, where people are utterly obsessed with instant gratification. While this seems like a promising milieu for Cross to exercise his wit as both a writer and director, Hits flounders in its slow pace while spending too much building up to one payoff joke in the end.

The central protagonist is Dave, played by UCB founding member Matt Walsh, a paranoid municipal worker who makes a habit of attending weekly city council meetings. There he complains against the conditions in his neighborhood and other irritants for which he blames the government. After one meeting leaves him particularly infuriated, Dave is unable to control himself and is arrested for refusing to leave the podium. Each meeting is filmed and posted on YouTube, and suddenly the clip goes viral spurring an art collective of hipsters from Brooklyn to champion Dave as an emblematic hero fighting ‘the man.’ They decide to mount a campaign in the hopes of bringing attention to Dave, which seems to mock hippie social activist movements like Occupy Wall Street and others. Meanwhile, his scantily dressed daughter Katelyn Stuben (played by Meredith Hagner, whose performance is reminiscent of Anna Faris) is determined to be a contestant on The Voice. Her ultimate goal in life is to become famous at any costs, and she often daydreams about being interviewed by Ellen alone in her car. After realizing she needs a better demo to send to producers, she must decide whether or not to whore herself out to a sleazy neighbor who moonlights an audio engineer. The irony of her character is that as she attempts to become famous her father inadvertently does instead.

While there are a few genuinely funny bits in the script, most of the jokes are hit or miss. There are a slew of secondary characters, like a typical white boy rapper, redneck neighbors and exaggerated hipsters. Toss in an onslaught of reality show jokes and poking fun at social media and you get a handle of the world Cross is critiquing. There’s a ton of wasted cameos like Julia Stiles, Michael Cera as a weed delivery boy, and Rob Corddry as a hillbilly jerk. Since most of Hits builds to a singular comedic crescendo, which is hands down the funniest bit, the overall effect sucks the energy out of the rest of the film. In some ways it’s reminiscent of Portlandia sketches but stretched out to the point of irritation where it loses all steam. While it’s nice to see Cross in the director’s chair, it’s a disappointment that Hits‘ satirical highs are undercut by a series of uninteresting scenarios.

Hits premiered at Sundance Film Festival 2014. One can see our full coverage of the festival below.