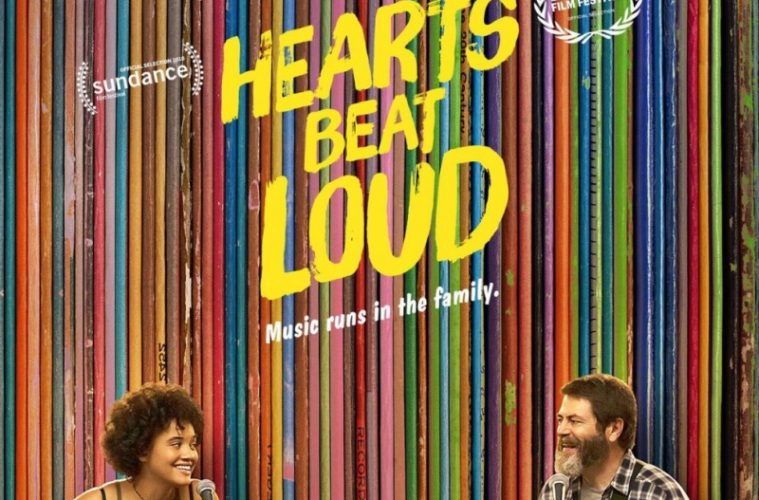 Hearts Beat Loud, directed by Sundance mainstay Brett Haley, is a film made of optimism. Starring the immensely likable Nick Offerman and Kiersey Clemons, it tells the story of a father and daughter who bond during the summer before she leaves for college by starting a band together. Set and shot in Red Hook, Brooklyn, this film is often slight but always welcoming. The two leads have a pleasant chemistry that elevates each exchange and build out a meaningful–and meaningfully deep–relationship that’s easy to engage with and root for.

Frank (Offerman) is a single dad closing his record store, much to the dismay of his landlady Leslie (Toni Collette), who has got more than a passing interest in her tenant. Desperate to keep his daughter Sam (Clemons) close before she leaves, Frank eggs her on to play some music with him. After they record a song, put it up on Spotify and get a positive response, he becomes convinced the duo can tour and find success. It’s ultimately a small conflict within a narrative that concerns multiple characters who are mostly doing alright. Sam finds new love in Rose (the incomparable Sasha Lane) while Frank leans on Leslie and friend Dave (Ted Danson playing a bartender!) for support. While he does have a mother (Blythe Danner, a Haley regular not given much to do this time around) who is slipping into dementia and the fractured memory of his late wife still lingering, the script from Haley and Marc Basch avoids much of the potential drama.

In many ways, this is refreshing. Watching/listening to Frank and Sam play their music is a welcome distraction from the current state of affairs outside of the movies. Its distinct lack of cynicism will be blanket for many. The songs by Keegan DeWitt are easy to like much like Clemons herself, who is doing her own singing here. Haley has built his brand on this kind of movie, in which relatable people take on relatable problems. There will be no large revelations, no grand moments of reflection. What’s lacking in complexity is made up for in comfort.

This will surely leave some wishing for a bit more, but the intentions are modest and true. Hearts Beat Loud has a sure hand behind it in Haley, still a young filmmaker with a burgeoning opportunity to get more ambitious with future projects. The man knows how to direct actors and squeeze the best out of them. It’s no small feat to be sure, even if the film itself feels a bit modest.

Hearts Beat Loud premiered at the 2018 Sundance Film Festival and opens on June 8.