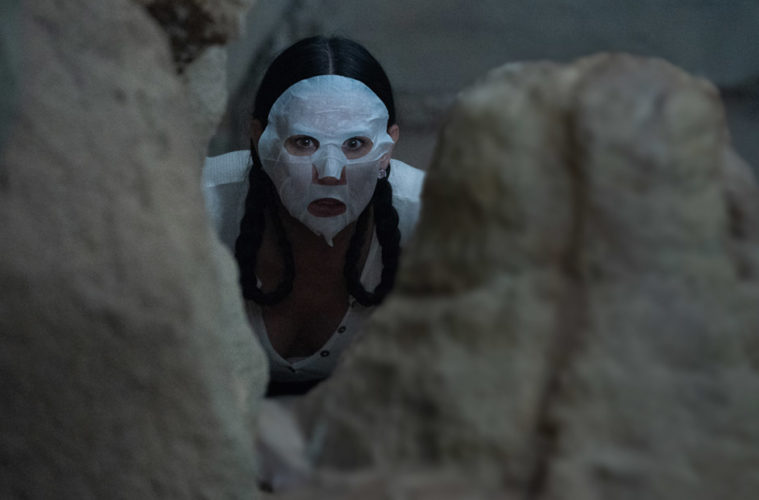 Sundance Review: ‘Corporate Animals’ Takes a Huge Bite Out of an Easy Target

A corporate team-building retreat goes way bad in Corporate Animals, written by Sam Bain and directed by Patrick Brice. From the jump, it’s a great hook. That plus a funny-enough opening promo, in which the company in question is glibly promoted by its CEO Lucy (Demi Moore), makes a promise bigger than the rest of the film can keep.

Early on in an ill-advised hiking excursion, the employees of Incredible Edibles (which produces edible cutlery, of course) find themselves trapped underground. As obtuse tour guide Brandon (Ed Helms) attempts to find a way out, gossip floats about regarding the solvency of the business, Lucy’s insane decisions, and one particular potential promotion. Jess (Jessica Williams) and Freddie (Karan Soni) are both certain they are shoo-ins for an upgrade within the company, facing off against each other as potential rivals while the rest of the group loses hope. All but Lucy, of course. Her ego is too large to consider failure.

Brice has made a career of chamber pieces in which characters are forced to face up to strange urges that feel as honest as they do outlandish. Here is no different, though a bit more extreme. As days tick on, a dead body among them begins to look appetizing. Cannibalism becomes the topic d’jour, and the talented cast makes a meal of it. Standouts here include Dan Bakkedahl as Billy, who is the manifestation of disgruntled; Calum Worthy as Aidan, an eager intern who’s saddled with a gruesome injury he can’t stop apologizing for; and Martha Kelly deadpanning as Gloria.

Yet even with reliable supporting actors and a runtime under ninety minutes, there isn’t enough material to keep things engaging. There are a handful of funny cannibalism bits, to be sure, but it gets old fast. The biting commentary on modern business never really makes an imprint. Moore is taking big swings with her character, but misses too often. Similarly, the relationship meant to be built between Jess and Freddie never gels. All of this along with a misguided animated cutaway in the middle of the picture add up to a missed opportunity.

Corporate Animals premiered at the Sundance Film Festival and opens on September 20.