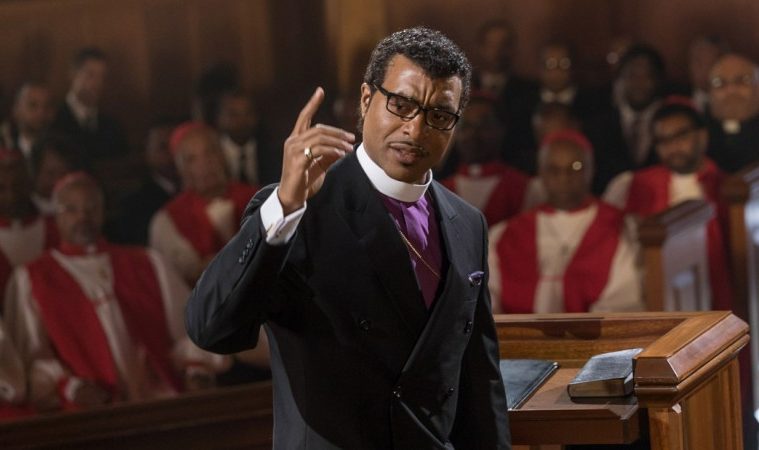 Sundance Review: ‘Come Sunday’ is an Admirable, but Hollow Crisis of Faith Drama

It’s rare that mainstream filmmakers attempt to take seriously matters of faith – a subject personal to a majority of people but which movies have historically handled clumsily. This perhaps exposes the gap in the competencies between the greats and the merely good, OK, or less. It takes a true understanding of an art form to use it to express the ineffable, spiritual aspects of human experience. The ways of doing so do not exist in the conventional toolkit. Come Sunday makes an admirable effort to delve into religious conviction and changes in faith, but comes up feeling too normal and disconnected from those matters.

The film dramatizes the true story of Carlton Pearson (Chiwetel Ejiofor), a celebrated Church of God in Christ bishop who at the height of his power in the ‘90s preached to a congregation of over 6,000 and reached millions more through television broadcasts and revival tours. Mentored in college by televangelist superstar Oral Roberts (Martin Sheen), he stood to inherit Roberts’ throne as the head of the charismatic movement and one of the most influential preachers in the country. And then one day Pearson began preaching that Hell isn’t real and that Christians and non-Christians alike are all saved. It was not long before he lost parishioners in droves and was branded a heretic by his denomination. His story was later told in an episode of This American Life, which serves as the basis for Marcus Hinchey’s script.

There are two basic directions in which this film could take such a plot. It could eschew complicated theological arguments in favor of staying trained on the emotional journey of Pearson, his family, and his friends. (Thus being accessible to non-Christians while potentially keeping out people who would have a real investment in the debate at hand.) Or it could go all in on a dialectical mode on the subject of Hell. (Getting Christians involved in the stakes while utterly alienating non-Christians.) Ideally, it would do both, but grounding dialectics in emotion is not a common skill.

It’s certainly outside the reach of this movie, which attempts to do both but succeeds in neither. The religious arguments have few groundings – it comes across as if Pearson denies Hell simply because he doesn’t like the concept, which is a disservice both to him and to his position, which has both a complex history and considerable scholarly investigation. The emotion, meanwhile, is muted. Director Joshua Marston does not invite the presence of the divine into the movie’s aesthetics, instead going through routine techniques and relying on the actors to deliver.

Those actors – Chiwetel chief among them – do indeed give it their best, and in isolation from the script and direction display some genuine pain at friendships being torn apart by the whims of dogma. But there’s a fundamental disconnect between them and the film’s core agnosticism, which is there regardless of the faith of any of the filmmakers or actors. The great Lakeith Stanfield plays a young man in Pearson’s congregation struggling with his sexuality, which is rendered via clichés about gay suffering that felt tired even in the time this film is set in. Gina Pearson (Condola Rashad) is characterized through similarly worn tropes of the struggling supportive wife, and the movie doesn’t even have the decency to give a satisfactory arc to her coming to terms with her husband’s about-faith – hell, we don’t ever learn what actual belief she holds about what he preaches. Come Sunday’s profession of faith, or sympathy for it, is hollow, even if it is sincere.

Come Sunday premiered at the Sundance Film Festival and will be released on Netflix on April 13.