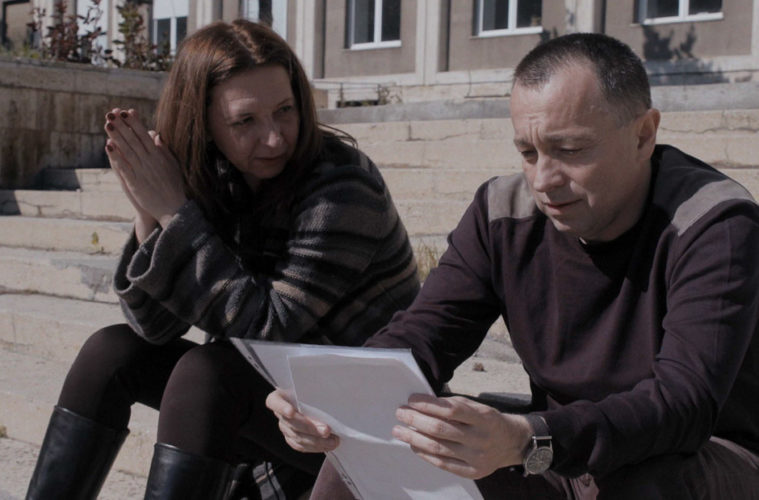 Part journalism procedural and part depressing exposé, Alexander Nanau’s verité documentary Collective examines the institutional corruption at the heart of the Romanian health care sector. The existence of such organized malfeasance will come as no surprise to anyone who has seen any of the Romanian New Wave films that touch on the country’s nightmarish bureaucracy. But, really, any sentient human being living in the western world won’t be blindsided by the fact that for-profit industries cuts corners or that government officials outright lie to the press about various wrongdoings. Many Americans, currently living through an epistemological crisis of staggering proportions, are now slowly inured to such ugly realities.

With that said, even true cynics might still be disturbed by Collective. Nanau chronicles a scandal so devastating in its effects that it’s really only comparable to the horrifying incident that precipitated it. In 2015, a deadly fire broke out in the Bucharest club Collectiv. It immediately claimed 27 lives, but 38 more subsequently died in hospitals weeks after the tragedy. It turns out that these medical facilities were using a diluted disinfectant that was useless against killing dangerous bacteria. Thus, deadly infections became rampant and people died of preventable diseases, all because doctors were operating in septic conditions.

The first half of Collective follows journalists at Romania’s Gazeta Sporturilor, i.e. the Sports Gazette (yes, the publication primarily covers sports; imagine Sports Illustrated breaking a story that upends the Washington status quo), who questioned the official statements coming from the Ministry of Health defending the quality of Romani hospitals. Led by writer Cătălin Tolontan, the team discovers that the pharmaceutical company Hexi Pharma was selling diluted solutions directly to the hospital who in turn were diluting them further. Bribes were exchanged for doctors’ silence and Hexi Pharma made record profits. The scandal eventually forces a regime change and an interim government takes over. Hexi Pharma owner Dan Condrea becomes the subject of an intense government investigation spurred by national outrage. Sometime later, he dies in a car accident that’s ruled a suicide but is widely suspected to be a homicide.

Collective’s second half follows the new Minister of Health Vlad Voiculescu, a young patients’ rights advocate who preaches the wisdom of transparency and reform. Despite a shaky early press conference in which he stumbles through apologies and promises, Voiculescu proves to be sincere in his attempts to atone for the previous administration’s misdeeds. Unfortunately, he’s stymied by rigid bureaucratic red tape that can’t be quashed. When Voiculescu asks a team of ministry civil servants why compromised Hexi Pharma products are still being used in hospitals, he’s told they can’t be taken off the market because, by law, only Hexi Pharma can withdraw their products, and they can only do so after issuing corrective notices, which they can’t do because the courts have blocked their bank accounts due to the investigation. “In any sane society, a harmful product gets withdrawn immediately,” he says plainly. His team basically tells him that he’s not in the business of offering solutions. He impotently proposes them anyway.

The film’s observational mode makes these scenes unbelievably frustrating to watch, especially because Nanau doesn’t goose any of these moments with emotionally manipulative techniques or audience hand holding. He simply allows us to bear witness to shameless governmental disinformation, such as when the Romani government holds a press conference and claims their own chemical tests conclude 95% of hospital disinfectants were perfectly safe to use post-Collectiv. At many points, we see Voiculescu take full responsibility for the previous administration’s actions, eat metric tons of shit on the public stage and in private meetings with Collectiv victims and disgruntled doctors, only for him to be smeared by the Social Democrat party come election time because he suggested Romani hospitals aren’t equipped to handle transplant victims.

Nanau’s unprecedented access into the Ministry of Health alone makes Collective an urgent film, if for no other reason than it’s rare to see the sausage get made in such awful fashion. However, it certainly helps that he has perfect twin subjects in Tolontan and Voiculescu, both of whom are calm in demeanor and never succumb to fits of frustration that the scandal all but demands. They are consummate professionals who defend their actions with moral certainty and intellectual fortitude. Both men are closely connected—Tolontan’s work led to Voiculescu’s appointment—and yet, any progress they’ve made is short lived. Voiculescu’s father openly tells him on the phone to abandon the country before it breaks his heart.

Collective sports a procedural-like pace that keeps the information legible and the action linear. It doesn’t preclude a lighthearted touch nor get bogged down in misery to underline its points. At the same time, Nanau foregrounds the victims of the Collectiv fire in brief, crucial ways. First, he opens the film at a support group for friends and relatives of Collectiv victims where they share their grief and frustration at the system. He then seamlessly cuts to real-time footage of the fire breaking out at the club, a chilling sequence that neatly clarifies the stakes for everything that follows. He also includes scenes with Tedy Ursuleanu, a survivor of the fire who has turned her experience into artistic expression. Nanau’s fly-on-the-wall approach doesn’t render any of these moments impersonal or detached. Rather, they’re amplified by the formal matter-of-factness. Watching Ursuleanu proudly showcase the severe injuries she’s sustained in the middle of the spotlight carries its own gravity when it’s not being overemphasized by the direction or scoring. It reminds you why Collective primarily focuses on those trying to achieve justice for the victims: it’s important to continually ask “How?” and “Why?” even and especially when there’s no hope in sight.