Sundance Review: ‘Clemency’ Flips the Script on the Prison Drama 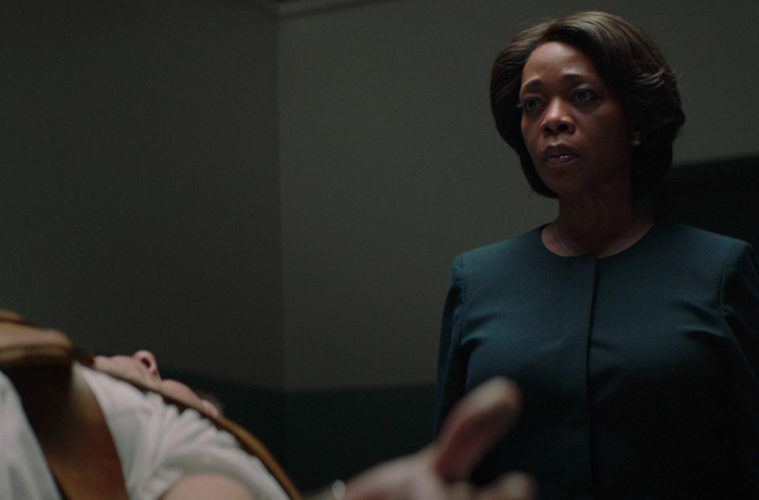 From Escape from Alcatraz to Cool Hand Luke to The Shawshank Redemption, cinema is rich with not only prison films focused on the plight of the prisoner, but also depicting wardens in an evil light. Clemency, winner of the Dramatic Grand Jury Prize at Sundance Film Festival, flips the script in both ways, both turning the spotlight on a warden and painting her in an empathetic, complicated light. Led by Alfre Woodard, she gives a riveting, emotional performance as the Bernadine Williams, a woman who is stuck between the demands of her grueling job and a disintegrating marriage, and can’t give her all to both.

Setting the stakes from the first scene, Williams is overseeing the latest execution on death row. It’s a cold, calculated process that requires rehearsal from all involved, but when it’s time to find the vein to lethally inject the prisoner, one can’t be found in his arm nor foot so they must painfully go through his upper body–and even that doesn’t go as planned. Coupled with the cries of his mother in the viewing room and anti-death row protesters outsides, it’s as intense as any thriller or horror as we’re given an inside look at the nightmares that torment Williams’ mind. The experience gives her further trepidation when it comes to the next prisoner on death row Anthony Woods (Aldis Hodge) and trying to piece together the remains of a crumbling marriage with her loving husband (Wendell Pierce).

Written and directed by Chinonye Chukwu, Clemency is exceptionally narrow and precise in its focus, both in terms of the cold aesthetic and the stripped-down script. Shot by Eric Branco, the frame often captures its isolated characters in all their loneliness, with the sterile prison walls enclosing in on them. More or less a series of unembellished encounters as Williams goes through her routine, she starts to begin to open up more when she learns about Woods. Played by Hodge in a gripping performance, he doesn’t say a word–just shaking and tears–when Williams explains the schedule on the day he will die. He’d rather have control over this decision and, in a brutal scene, he repeatedly throws himself against his jail cell wall before screaming, “I say when I die.”

Of course, as the title suggests, there’s always the hope of clemency being granted by the governor’s office–even at the very last moments before the death penalty is executed–and Chukwu ensures we are just as optimistic in our desire for it to come through. As the noose gets tighter, the mother of Woods’ son (who he has never met, and won’t be allowed to see the execution carried out, per Williams’ strict orders) comes to visit and Danielle Brooks gives a heartbreaking turn as their discussion takes an unexpected route.

To its fault, Clemency doesn’t play in the gray area as much as it could as we’re always on side of Woods–clearly wrongly convicted as a cop killer–just like the many protestors outside. The film also stumbles in some of the home life we witness. So much between Williams and her husband could be conveyed in their body language, yet the script overplays their distance as Pierce’s character exclaims he has an “empty shell of a wife” in a conversation that’s too on-the-nose.

However, when the film is just focused on Woodard and Hodge, it never loses our attention. What’s to come is inevitable and Chukwu builds to the climax with patient and restraint, ultimately giving Woodard the kind of single reaction shot that most actors can only dream of receiving in their careers. Clemency is a thoroughly draining experience as if we’re placed in purgatory with no means of escape, but it’s ultimately powerful in the ways it shows how the death penalty has consequences for everyone involved.

Clemency premiered at the Sundance Film Festival and opens on December 27.