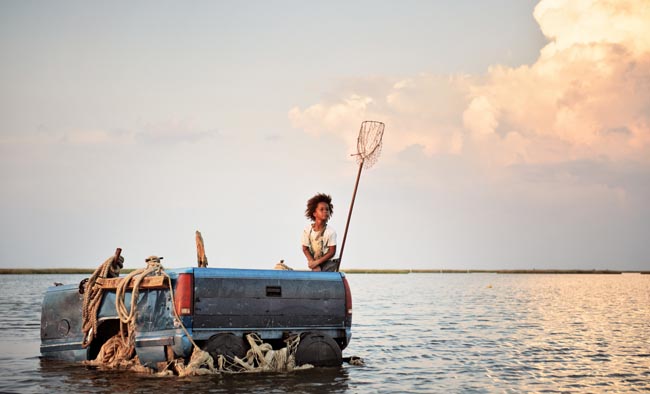 One of the joys of attending festivals is entering a film with absolutely no idea what will unfold before you. Sundance is a birthplace for many of these discoveries, the latest being Beasts of the Southern Wild. Set in mystical surroundings with no mention of time or place, director Benh Zeitlin‘s richly textured story of community and independence is brimming with soul and inventiveness. Six-year-old Quvenzhané Wallis makes her acting debut as Hushpuppy, steering the film with authentic voice-over directly from her naive point-of-view (think Days of Heaven). Living in an elevated trailer full of handmade toys and worn objects that have passed their natural life cycle, her father Wink (Dwight Henry) is just a tin-can telephone away.

Along with a small, closely-knit community they occupy The Bathtub, an area on the outskirts of any sort of established civilizations. On the brink of destruction with any passing storm, they survive on only what they find from wild chickens to medicine scrounged together from the earth.

The realization that Zeitlin’s directorial debut is one to admire comes early on, with an electrifying opening following Hushpuppy through her lushly detailed world. Dan Romer and Zeitlin’s outstanding string-filled score give an added charge as it is quickly learned this a group that’s highest pleasure is derived from spending time together, drinking and setting off fireworks.

The utter simplicity of this life and the inventiveness in which it is conveyed is one of most compelling elements here. Need to traverse through the water? Take your boat made out of a pick-up truck flatbed. Hungry? Eat the surplus of seafood, but make sure to only use your bare hands when cracking open that lobster. The code which this community lives by is one of diligence and respect, with the line “take care of those smaller and sweeter than you” summing up their overarching philosophy.

The tables are turned when Hushpuppy’s father is stricken with disease and through her tough exterior and emotionally fragile state she must learn to deal with the hardship. This coming-of-age story is much different than the handful I’ve already seen at the fest, as our lead is far away from the know-it-all adolescent stage, instead relaying her new experiences in only a sincere, frank manner someone at that age would.

Zeitlin always conjures up the unexpected, whether it is through magical realism sections of icecaps melting leading to prehistoric beasts known as aurochs ripping through the screen (I promise, it connects and strengthens the narrative) or the major, well-executed tonal shift about halfway through the film. While I never wanted to leave this world, some of the interactions between Hushpuppy and Wink had a slightly repetitive vibe, being one of the few detractions from an otherwise invigorating experience. With an ending that left chills down my spine, Beasts exits as strong as it enters, making for an already much-buzzed Sundance title that delivers on the hype.