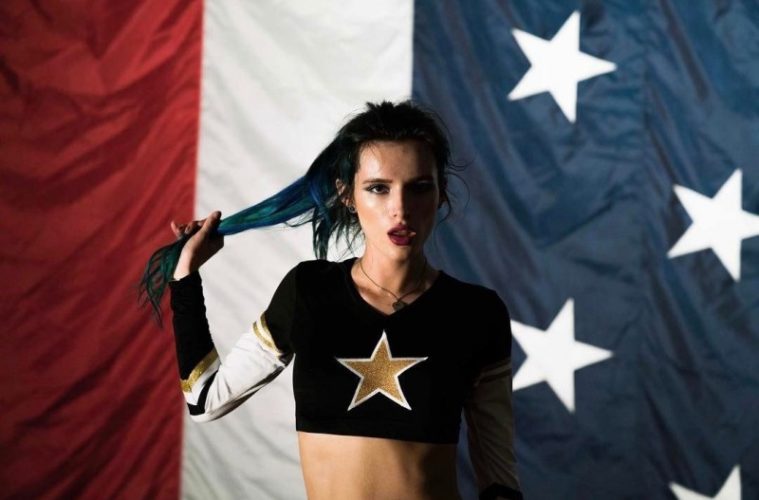 “This is this is the story of how my town, Salem, lost its motherfucking mind,” says Lily (Odessa Young) in the opening moments of Assassination Nation, a movie so painfully attempting to be of its time that all nuance is thrown out in the window in favor of an assaultive, ultimately muddled attack on the senses. That’s not to say some of Sam Levinson’s go-for-broke coming-of-age-action-thriller-drama-horror isn’t effective, it’s just that by trying to do everything, it feels like nothing is accomplished.

After this flash-forward intro, Levinson amateurishly boasts the “trigger warnings” to come by the finale: sexism, transphobia, racism, attempted rape, fragile male egos, torture; you name it, it’s there. The first act is then devoted to Lily (Odessa Young) and her group of best friends, captured with a strangely self-indulgent male gaze by Levinson, as they live their sex-positive lives of partying, sexting, and hook-ups with very little school work in between.

Amongst the erratic first half, Levinson has a few moments of writing that rise above shouting at what’s wrong with today’s internet, and those who use it. A conversation between Lily and her principal about how there’s much more behind her vulgar drawings than what’s on the paper is persuasively honest. Even if they never feel more than ciphers for broad ideas, there is a camaraderie between the leads, particularly felt by Lily’s transgender friend Becks (Hari Nef), who speaks with a sincere candor regarding her worldview.

Their lives all begin to come crashing down when the mayor, then the principal get their entire online databases hacked– every text, trail of viewing history, and photo are available for anyone to peruse. While the conservative, anti-LGBT mayor is revealed to be into cross-dressing and male escorts, the principal gets publicly lambasted for innocent photos of his child. This is just the preamble for the hacks to follow, featuring the digital lives of half the population of Salem being unearthed for the world to see. When the promiscuous personal lives of Lilly and her friends are made public, they become the main targets for chauvinistic bullies, including the cops, and a modern-day Salem witch trial is underway. This time, however, the women happen upon an arsenal of weapons to mount their bullet-riddled vengeance.

Throughout the scattered build-up and visceral release, Levinson has plenty of ostentatious touches, some of which work better than others. During a party, he breaks down the frame into a triptych in a perceptive comment on how what should be an intimate experience is distilled into vertically-oriented, social media-ready clips apt for public digital consumption. Less effective is a single take which floats around the house as the town zeroes in on their victims. By the fifth or sixth minute, it’s clear more tension would have been felt if this was simply a well-executed series of shots inside the home.

I’m willing to concede that today’s high schoolers may get something more out of this heavy-handed satire, which aims to attack misogyny by reveling in it for the majority of the runtime. Representation in cinema isn’t endorsement, but Levinson continually struggles to have a distinct handle on his message. There are little touches to admire–for once, an accurate representation of social media, including I.P. look-ups–and some thrilling moments of revenge as the teenagers carry out violent retribution, but for the most part this is far too thematically-confused and over-stuffed to engender anything more than a feeling of being violated.

Ending on a brazenly blatant lecture on the state of America and an easy gag before a needless end credits sequence, it’s clear that Levinson’s main goal is to provoke, the equivalent of screaming into a void where everyone listening is already on your side. Assassination Nation may hit buttons in the moment, but looking back, it fades away as an experience as ugly as it is unpleasant.

Assassination Nation premiered at the 2018 Sundance Film Festival and opens on September 21.