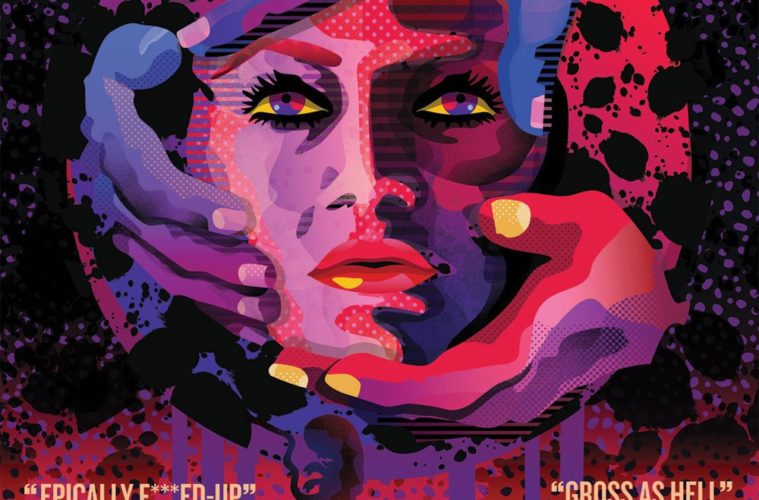 Ugly and occasionally entertaining, the female-led Antibirth is a punk rock horror thriller set in a decaying suburb somewhere in Michigan. Opening in the middle of a hardcore rager, we’re introduced to pals Lou (Natasha Lyonne) and Sadie (Chloe Sevigny), two aging party girls pushing 40 who are living fast in a landscape that offers little else. The film takes this element seriously, even if its surely an ugly one. Lou, a military vet, lives rent free in her dead father’s trailer. To make ends meet she cleans rooms part time at a local budget motel, snorting a few lines of whatever to make it through the day.

With a background in music videos and shorts, director Danny Perez strings together a few sequences that seem to work. The opening moments are punk rock trashy as is the film’s over-the-top sequences. Style creeps in over substance in the more surreal moments which, despite the presence of Lyonne and Sevigny, extend their reach. Mysterious figures follow Lou as she goes about her business, either imagined or perhaps real people lurking in the dead of winter in Michigan. It’s a nasty trip into an abyss, but this is not quite Requiem For A Dream, despite the visions that follow Lou’s crashes.

Taking a bit of a vampire or even sci-fi twist, Lou discovers she’s possessed or pregnant — likely both. She seeks the guidance of Lorna (Meg Tilly), another vet who provides clues about a secret military experiment that we see but cannot quite put in context, and the plot is set forth. A sunburn Lou refuses medical guidance beyond that of a veterinarian early on, who refuses to supply her with something to numb the pain.

Infuriating but not without a message, Antibirth is part over-the-top horror film and part commentary on a military experience as Lorna is left to live the life of an impoverished junky, partying her nights away to mask deeper pain. Her medical plan includes the aptly named Gabriel (Mark Webber), a demon of sorts peddling cheap highs to the down and out.

The film’s horror and sci-fi elements verge on comedy (especially its climax) as Antibirth is the nasty punk rock step-child to the very best of William Friedkin (comparisons to the minimalist Bug and The Exorcist are easy to make). This is the nature of this particular beast. Despite being energetic even if it wears out its welcome and fascinating even as it frustrates, it never quite commits to a tone in true punk rock spirit. While another pass or two through Final Draft might have yielded a more coherent picture, the spirit would have been lost.

Antibirth premiered at the 2016 Sundance Film Festival and opens on September 2.