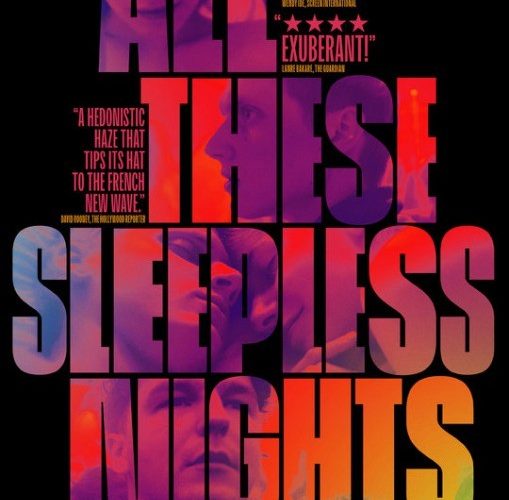 [Sundance Review] All These Sleepless Nights

Blurring the line between documentary and fiction like few films before it, Michal Marczak‘s All These Sleepless Nights is a music-filled ode to the ever-shifting bliss and angst of youth set mostly in the wee hours of the day in Warsaw, Poland. Marczak himself, who also plays cinematographer, is wary to delineate the line between narrative and nonfiction, and part of the film’s joy is forgoing one’s grasp on this altering perspective, rather simply getting wrapped up in the immaculately-shot allure of its location.

The main through-line, if one can even qualify it as such, follows Kris, who recently broke up with his girlfriend, and Michal, a twenty-something pair eager to find nightly amusement and perhaps some greater significance in their repetitive lives. “Playing” themselves, they glide through a dark Warsaw, illuminated by street lamps and the strobing lights from whatever party they stumble across, fearing nothing, walking through the middle of traffic and touching the side of trains as they zoom across. Their relationship starts to flounder when Eva, Michal’s ex-girlfriend, re-enters their lives, this time finding a mutual attraction with Kris.

One is occasionally reminded of the melodrama found within Gaspar Noé’s Love from last year — complete with cut-to-black fades, and ever-moving camera — but where that film felt artificial in its dialogue and performance, All These Sleepless Nights rarely loses its authenticity. Even with existential voice-over about the cumulative events in one’s life and drug-fueled talk of sex, partying, romance, and the future, it may eventually become rambling from a viewer’s perspective, but then again, one might have had these very same conversations as the sun comes up.

Using the combination of a Steadicam and computerized gimbal, Marczak floats in and out of crowded dance floors, house parties, lush gardens, and sun-kissed beaches, all in a way that would make Emmanuel Lubezki proud. Coupled with a near-constant soundtrack of the latest in electronic and pop (as well as a Polish version of Pocahontas‘ “Colors of the Wind”), one could mistake any scene from this as a music video, but as a whole it forms something cohesive. One of the most interesting formal choices is a noticeable excursion into home video-esque footage for the film’s most intimate moments, as if we’re entering our protagonist’s mind for the the first time, separated from the glossy sheen that occupies the rest of life.

In accentuating performance through movement, All These Sleepless Nights could be construed as a more polished Girl Walk // All Day, albeit with much more dialogue. As we follow Kris’ self-absorbed journey, a memorable moment in which he dons a pink bunny suit and starts to think about those around him may seem foolish to an outsider, but it’s a leap ahead in his development. “All relationships start with injuries,” Kris says in early on in the film. A month from now, he certainly won’t feel the physical damage he’s inflicted upon himself here, but one imagines as the decades pass, he’ll look back with longing on the euphoric feelings captured here.

All These Sleepless Nights premiered at the 2016 Sundance Film Festival and opens on April 7, 2017.