Spider-Man: No Way Home Review: The MCU Enters the Multiverse on a Nostalgic Thrill Ride 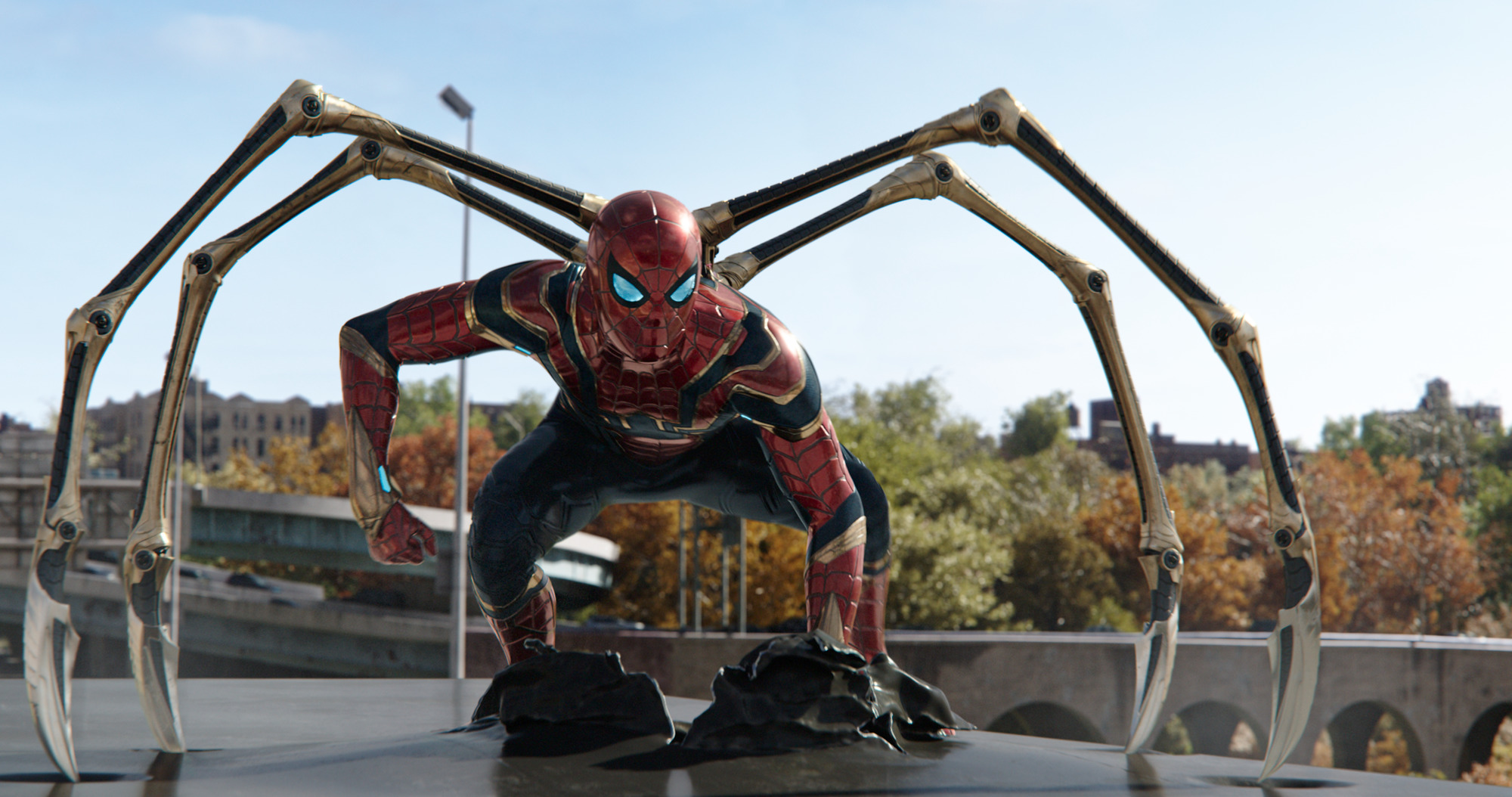 Two years ago, when Martin Scorsese called the Marvel Cinematic Universe something akin to a theme park, the comic book community—both its filmmakers and fans—became incensed. Despite the legendary director’s nuanced, even complimentary assessment (yes, he called this era of superhero movies “well made”), proprietary corners of the Internet gawked at his characterization and casual dismissal of them as non-cinematic blockbusters. But how else do you describe Marvel’s latest spandex attraction Spider-Man: No Way Home, a movie filled to the brim with a near half-dozen villains, multiple universes, and two decades of nostalgia? Much like some of the studio’s previous installments, this is a movie engineered to resemble a thrill ride, a greatest-hits carousel powered by fan service and corporate recycling. It practically embraces Marty’s designation—and that’s OK. Despite their noted limitations, theme parks like this still offer plenty of fun.

There’s already an inherent rollercoaster energy to Spider-Man, the way he flies through skyscraping corridors and bungees above oncoming traffic. It’s a buoyancy and boundlessness that the MCU has relied on to keep its IP train chugging, laying track for its next wave of superheroes and apocalyptic calamities. That was the case in 2019’s Far From Home, which proved there was still a heartbeat after Avengers: Endgame, and it’s true of No Way Home, a vessel to establish the studio’s Phase 4 designs and brand Peter Parker as the new leader of this ever-expanding expedition. It’s a burdensome task tethering webs to a goliath’s overarching narrative plans, but someone’s got to do it.

To be fair, Tom Holland has been up to the task, providing Peter with comic relief, perky geekdom, and romantic yearning in the minimal spaces he’s afforded. But generally speaking, director Jon Watts and returning screenwriters Chris McKenna and Erik Sommers don’t loiter in the day-to-day struggles of their high schooler—not when the stakes are so high, and in the case of No Way Home, not when there are other universes to bring into the mix. Their movie begins right where Far From Home ends: Mysterio—thanks to the city’s blowhard mouthpiece J Jonah Jameson (J.K. Simmons), who has graduated from editing newspapers to hosting conspiratorial Internet news shows—outs Peter as Spider-Man. The public repercussions impact his girlfriend MJ (Zendaya) and best friend Ned (Jacob Batalon), who are subsequently rejected from MIT, and turn his Aunt May’s (Marisa Tomei) apartment into a target for brick-throwers, who believe Peter is responsible for killing innocent people on past his London field trip.

Peter’s hail mary to fix all of this is a visit to Dr. Strange (Benedict Cumberbatch), who agrees to help cast a spell that will make everyone in Peter’s life forget that he’s Spider-Man. Things don’t go as planned. Strange’s amnesia-inducing magic cracks, opening portals from parallel universes, and suctions in anyone that’s ever known Peter’s true identity throughout time and space. Naturally, that includes a handful of previously thwarted villains, who turn this 2 ½-hour spectacle into a reunion tour of the last two decades, while Peter captains an epic game of “Scooby-Doo” round-up.

It’s not a surprise then, based on the trailers and promotional tour, to see Alfred Molina return as Doc Ock, Willem Dafoe cackle again as Green Goblin, and Jamie Foxx, sporting a cleaner shave, juice back to life as Electro. (The former pair has been given indistinguishable CGI concealer to mask wrinkles as though they’d arrived straight out of 2004.) A couple of other baddies from the Sam Raimi and Marc Webb eras also show up, tying together the Sony and Marvel juggernauts that have made a habit of marking their territories and drawing legal battle lines for these characters over the years. For the time being, everyone plays along nicely in this intergalactic sandbox.

Of course, there are more enticing throwbacks that join the party, as well as consistent winking humor, abrupt moments of tragedy, and entertaining, if dull-looking set-pieces. It’s an exciting, if not eerie, sight watching the past blend with the present, and it might seem novel if 2018’s animated, acrobatic Spider-Man: Into the Spiderverse hadn’t already introduced the concept. It’s not a spoiler to say there’s a general air of confusion, especially in its bulky middle section, that hangs over the movie’s primary antagonists, each of whom has murky motives and reasons for inflicting terror. In fact, there probably should be more confusion considering the life-altering portals they’ve just traveled through. It’s hard to put this many villains into a stew and expect perfect narrative logic.

If only there was more time to make each of them count. The compromise of stacking this many characters is that their decisions begin to feel programmatic, constrained to plot machinations. Lucky that Watts has Molina, and particularly Dafoe, whose haunting poker face, which blends Norman Osborne and his green alter-ego, still inspires terror and makes a few scenes crackle more than they should. That’s why Raimi’s original Spider-Man, and especially his sequel, remain such iconic fixtures in the genre—the menace, the psychological warfare, the horror-inspired filmmaking gave his movies real texture and recognizable stakes. Watts matched Raimi’s grounded, high-stringed showdowns briefly in Spider-Man: Homecoming, when Michael Keaton played mental chess with Holland through his rear-view mirror, and you can feel him close to producing a similar moment with Dafoe. It’s enough to jog your memory, and return to Raimi’s (and maybe, occasionally to Webb’s) enticing New York City.

It’s also enough to give some personality and flavor to the MCU’s computer-generated showdowns. Watts supplies Holland with some real bursts of pathos—there’s rage and vulnerability, traits the young actor hasn’t really displayed in his multiple runs as Spidey—and choreographs a climax that isn’t strictly visual chaos. That’s a low bar, but Marvel has mostly perfected what’s now an industry-standard muddy sheen to its warring dioramas, which feature enough snippets of iconography—think back to the Avengers forming a circle outside of Grand Central Station—to paper over its lack of clarity and bland locations (here, that’s a highway and multi-story scaffolding). Watts doesn’t refrain from his own movie poster moments, crafting video game-esque transitions before turning on the controller. And, at one point, he has some fun with a mirror dimension that imitates an Esher pop-up book of Manhattan. His stitching holds together and keeps the energy from fizzling.

Though Holland has expressed some doubt about his future in the MCU, after six movies, it’s hard to blame his omnivorous appetite. It’s a tall order to fill Peter’s shoes and establish another unique variation to a character that both Tobey Maguire and Andrew Garfield have previously inhabited in charming, equally anguished ways. And even though there’s a distinct next chapter that Marvel is carving—perhaps enough to entice Holland continuing his run—it would be nice to see him get a chance to catch his breath and exude more of the “friendly-neighborhood” version of his moniker, much like his predecessors got to. But that’s a tough sell, mostly because Marvel would rather embrace its theme park attractions. No Way Home is better for it. It will get people to the theater. As another acclaimed director, Paul Thomas Anderson, recently remarked, “let’s be happy about that.”