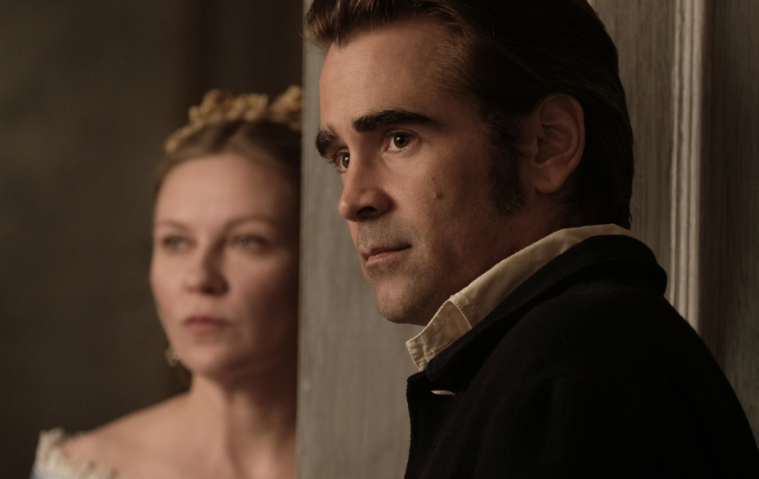 Following The Bling Ring, Sofia Coppola is returning this year with a highly-anticipated remake of the 1971 Don Siegel thriller The Beguiled. With Nicole Kidman, Kirsten Dunst, Elle Fanning, Colin Farrell, Angourie Rice, and Addison Riecke rounding out the main ensemble, the first images have now arrived ahead of the trailer later tonight.

“I haven’t really done a genre film,” Coppola tells EW, who debuted the images. “It was fun to figure out how to approach that but still [keep the film] in my style, and to have this kind of beautiful, dreamy world that I like — but with a plot!” Shot by Philippe Le Sourd (The Grandmaster), the Civil War-era story follows Farrell as a Union soldier held captive by the Confederates in a girls’ boarding school, where he begins to con his way into their hearts.

Coppola adds, “The main crux of the story is about the dynamics between a group of women all stuck together, and then also the power shifts between men and women. So for me, it’s very universal, but it’s in this exotic setting of the Southern gentility.” As we await the trailer later today, check out the new images above and below.

The Beguiled unfolds in a girls’ school in the state of Virginia in 1864. As the Civil War rages, The Miss Martha Farnsworth Seminary for Young Ladies has been sheltered from the outside world— until the day a wounded Union soldier is discovered nearby and taken in.

The Beguiled will be released on June 23rd.