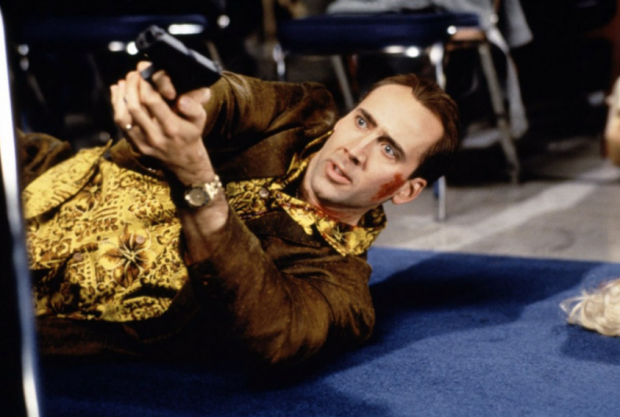 In the weeks leading up to Snake Eyes’ release in August of 1998, my dad and I had gone together to see Lethal Weapon 4, There’s Something About Mary, and The Negotiator. Both action titles were forgettable fare, but were a big deal upon release. (Riggs and Murtaugh vs. Jet Li! Samuel L. Jackson and Kevin Spacey conversing via walkie-talkie!) Brian De Palma‘s Snake Eyes with dad was the next order of business. The theater was packed because adults frequented the multiplexes not so long ago. You’re all of 10 years old, Nicolas Cage’s recent output – The Rock, Con Air, and Face/Off — has been terrific, and something seemed off with this new one. You remember leaving the theater not disappointed, but with little to discuss with dad on the ride home. Dad passed away in 2013, long after the Gary Sinise villain era and a few years before cinephiles would comb through De Palma’s entire body of work. Most memories of dad have long faded, willfully replaced with those of an unrecognizable, horrible person — when he’s referenced in the later years, “dad” is replaced strictly by his first name — but somehow, perhaps hilariously so, our date with Snake Eyes endures.

“They were specifically told they couldn’t have a camera up there.” Such a line is delivered with both sternness and a directorial winking eye in De Palma’s divisive conspiracy thriller. It’s a moment that arrives late in the film and not-so-surprisingly serves as the key to unlocking what gets the director off time and again: otherworldly surveillance and deceptive imagery in an environment where nearly every gesture and motivation is driven by deceit and upward mobility.

Sandwiched between Mission: Impossible and Mission to Mars in the director’s oeuvre, Snake Eyes boasts the goal of investigating a dizzying environment of corruption and false illusion. Far from a renowned success, and with two recent viewings under my belt since its initial release, the film is as flawed and ridiculous as the outfit Cage wears throughout. As a formal exercise for hardcore fans, it more than suffices. There’s also a gold cell phone.

Playing like a far less gutting, gaudier version of Blow Out, Snake Eyes begins on the night of a huge boxing match in an Atlantic City arena-hotel-casino owned by Gilbert Powell (John Heard). Outside, Hurricane Jezebel is gaining steam, but inside roams the flamboyant, crooked hometown police detective Rick Santoro (Cage), the focus of a blissful twelve-minute Steadicam shot that is among the best things De Palma has put to screen and stands as this film’s runaway highlight. Rick spends the opening minutes fielding calls from both his mistress and wife, abusing his power to steal money and placing a large bet on the fight. Rick scores ringside seats since his best friend, Kevin Dunne (Sinise), is heading up a security detail for Defense Secretary Charles Kirkland (Joel Fabiani). During the fight’s climax (first presented offscreen), the Secretary is assassinated, spurring Rick to do all he can to make sure Kevin has an alibi.

The extremely busy, information-packed first act opens up chaos as Rick begins to burrow deeper to find the truth. This gives De Palma free rein to retreat to his usual bag of formal tricks. POVs end up shifting from Rick to Lincoln Tyler (Stan Shaw), the boxer who purposefully threw the fight for a handsome payday – his perspective begins in his dressing room, where his manager pleads with him to stay on the straight and narrow, and then into the ring, where he suffers a phantom punch and loses the title – then to Kevin, who explains to Rick how a buxom redhead distracted him from protecting Kirkland, and finally to Julia (Carla Gugino), who sat next to Kirkland when he was shot. Her story is rehashed via split-screen, where Rick learns the shape and scope (military strategies) of what has been eluding him. Vehemently frustrated with her story, Rick comes to the realization that he’s lost control.

Deception is the order of the evening in this sewer of a town that’s begging to be wiped clean. Rick is juggling two lovers, Julia wears a wig to shield us from her true identity, Lincoln navigates sell-out-infested waters like an angry ghost, and Kevin plays up the fall of his golden-boy persona in order to throw Rick off his scent.

Since image remains the great deceiver in the land of De Palma, Snake Eyes‘ single-location setting plays marvelously well. He often centers his films on one crucial event (the crash in Blow Out, the prom in Carrie, the elevator encounter in Dressed to Kill), and the boxing match and assassination are just a couple of ways in which De Palma exploits this setting for maximum effect. The centerpiece of the second act takes us through the hotel and casino – up elevators, down hallways, and through rooms (those wonderful overhead shots!) – as Kevin and Rick go on a separate search to track down Julia. Each have different intentions, and the tension is ratcheted up with the use of all-knowing surveillance cams and Ryuchi Sakamoto’s taut score.

Rick’s newly minted moral compass converges with Kevin’s treachery, resulting in Rick refusing to join the conspiracy — the final sign that his hubris has been swayed. The police and a camera crew crash their climactic showdown, where Kevin takes his own life. Even today, it’s a strange, straightforward finale that deserved an upgrade. In Noah Baumbach and Jake Paltrow’s documentary, the director explains that the original and much more fitting ending had Atlantic City being destroyed by the hurricane, footage of which is shown therein. Oddly enough, it always seems like Snake Eyes is heading there until it comfortably settles down.

David Koepp’s script may give away too much early on, but cinematographer Stephen H. Burum and editor Bill Pankow keep this train on schedule. The film’s value now seems lost and is likely rooted in the banal ranking of other De Palma efforts. Its worth remains not so much in the memory of seeing it as a youngster, but as a film that ceases to exist anymore: it’s the pleasure of seeing Nicolas Cage as the god and king of his own realm, a notion briskly sanded-down and taken to task; it’s the arousing nature of the images and motives being shuffled around; lastly, it’s De Palma not flexing his muscles, and instead proving that, sometimes, he doesn’t have to. Flirting with greatness can still be a fun endeavor.