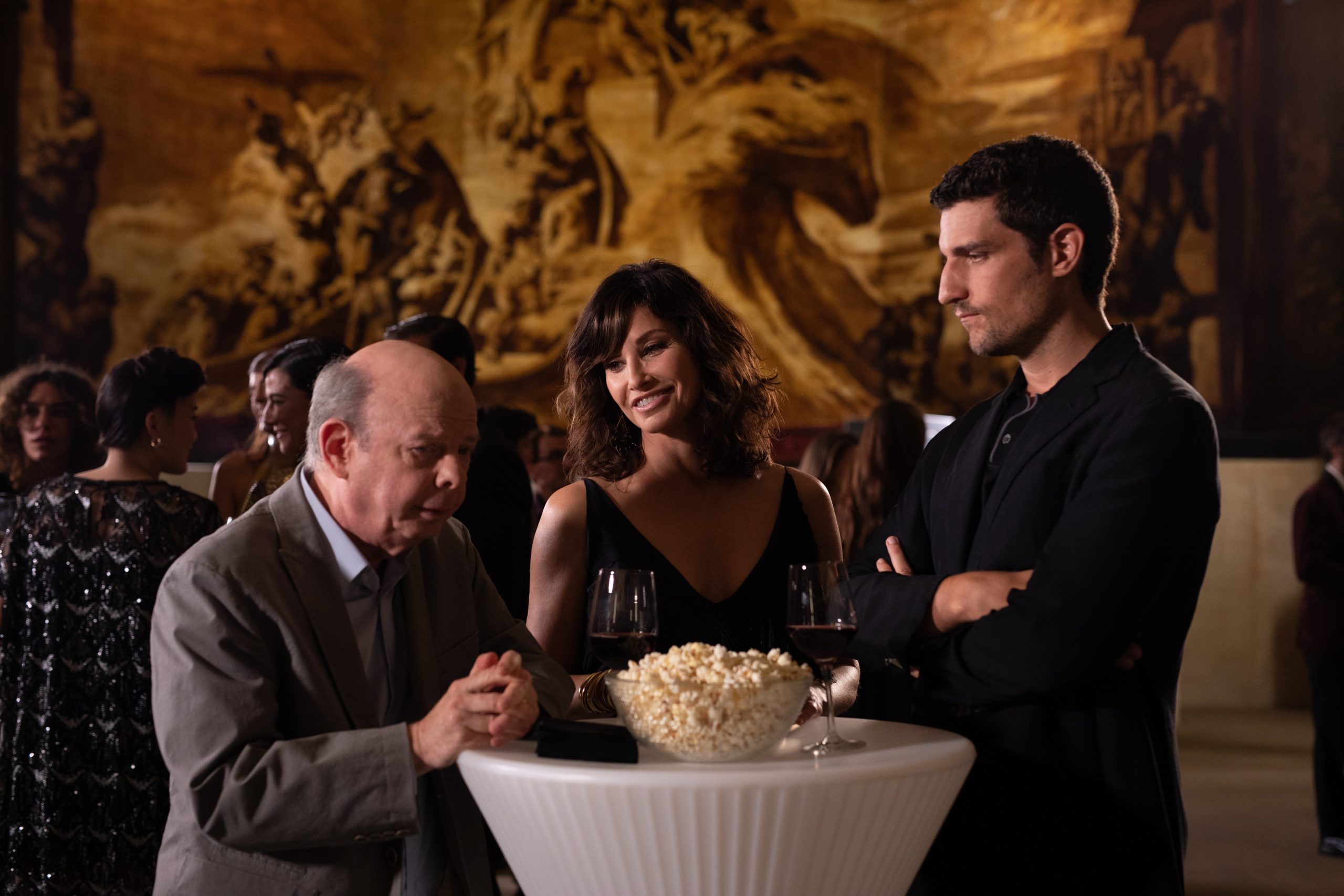 Entering the “likely a money-laundering scheme for Spanish businessmen” part of his European travelogue era, Woody Allen turns uniquely narrow-minded and bitter with Rifkin’s Festival, which takes aim at the film culture that’s both alienated and abandoned him this past decade. Exciting though it is to see the proverbial gloves come off, the hands, sadly, don’t get very dirty.

Beginning on the therapist couch, film critic, professor, and failed novelist Mort Rifkin recounts the story of how he accompanied his wife Sue (Gina Gershon) to the prestigious San Sebastián International Film Festival, where she was handling publicity for Philippe (Louis Garrel), a socially conscious, classic-American-cinema-loving filmmaker diametrically opposed to Mort’s own cinephilic principles. It’s hard to pinpoint what straw man Allen’s exactly going after here—perhaps Phillippe is just a stand-in for all the millennial A24 directors who’ve pissed him off in recent years—but regardless, peak annoyance comes for Mort when the celebrated new auteur with utmost self-importance states his next film aims to solve the conflict between Israel and Palestine. Yet for Mort, “Politics [in cinema] is ephemeral. It misses the big questions.” Herein Allen expresses frustration with a new type of art film concerned more with checking boxes and chasing the trends of the day than trying to answer what the point of everything actually is—like, say, Ingmar Bergman’s Through a Glass Darkly or something.

The trip takes a positive bend, though, when through some bodily pains Mort finds a new friend in Dr. Jo Rojas (Elena Anaya in a role probably written for Penelope Cruz). Revitalized by this fetching lady who seems to actually care about what he has to say about cinema, he keeps looking for excuses to see her while his wife runs off with Philippe behind his back. Which sounds like classic Allen terrain, but there seems less space for witty banter, more for Mort dreaming himself and other characters in extremely lazy, joke-free parodies of Janus classics like Jules et Jim, Persona, and The Exterminating Angel. It’s quite difficult to discern how Allen, even with such a spotty track record over the past two decades, could conceive sequences so dire. Not helping matters is Rifkin‘s drab look, despite cinematographer Vittorio Storaro still onboard; nothing resembles the wild modern digital technicolor look of Wonder Wheel or near-structuralist rotating camera work of A Rainy Day in New York.

Whatever its numerous failings, the movie gains a great deal of interest from the sheer novelty of longtime character actor Wallace Shawn in a rare leading role. His trademark high-pitched voice and slow gait make Rifkin a particularly prickly yet also intentionally (and unintentionally) hilarious character to center a feature film around. He’s undeniably the writer-director’s most memorable creation since, at least, Scumbag X in Hollywood Ending and a stand-in for the out-of-touch Allen (not exactly knowing that Godard probably wouldn’t leave the house to pick up a lifetime achievement award in Spain); it’s been proven already that legions of snarky Twitter users will be able to crack jokes about Mort Rifkin for years to come.

What kind of ultimately sinks this film, though, is the lack of a real emotional payoff, even if Mort and Jo’s unfulfilled romance has a nice wistful quality (and feels more mature than the highly unbelievable May-December relationship from Magic in the Moonlight). After all, it’s a little hard to be bowled over by the insights of an old man admitting defeat from seemingly the very beginning; the film cuts audio right before his therapist can even provide a response to Mort’s queries. As now, essentially, a kind of European exile, perhaps it’s fine that Allen works in such a narrow register. But even for someone so past his prime you can’t help wishing he had a little something more controversial and fiery left in him, one willing to ruffle feathers of the culture that’s shunned him. Though who knows—perhaps the kitsch of its lead character will make it last far beyond the alternate-universe iteration, where Rifkin’s Festival may have been an Amazon production with a bumbling Robert De Niro.

Rifkin’s Festival opens on January 28 in theaters and VOD.