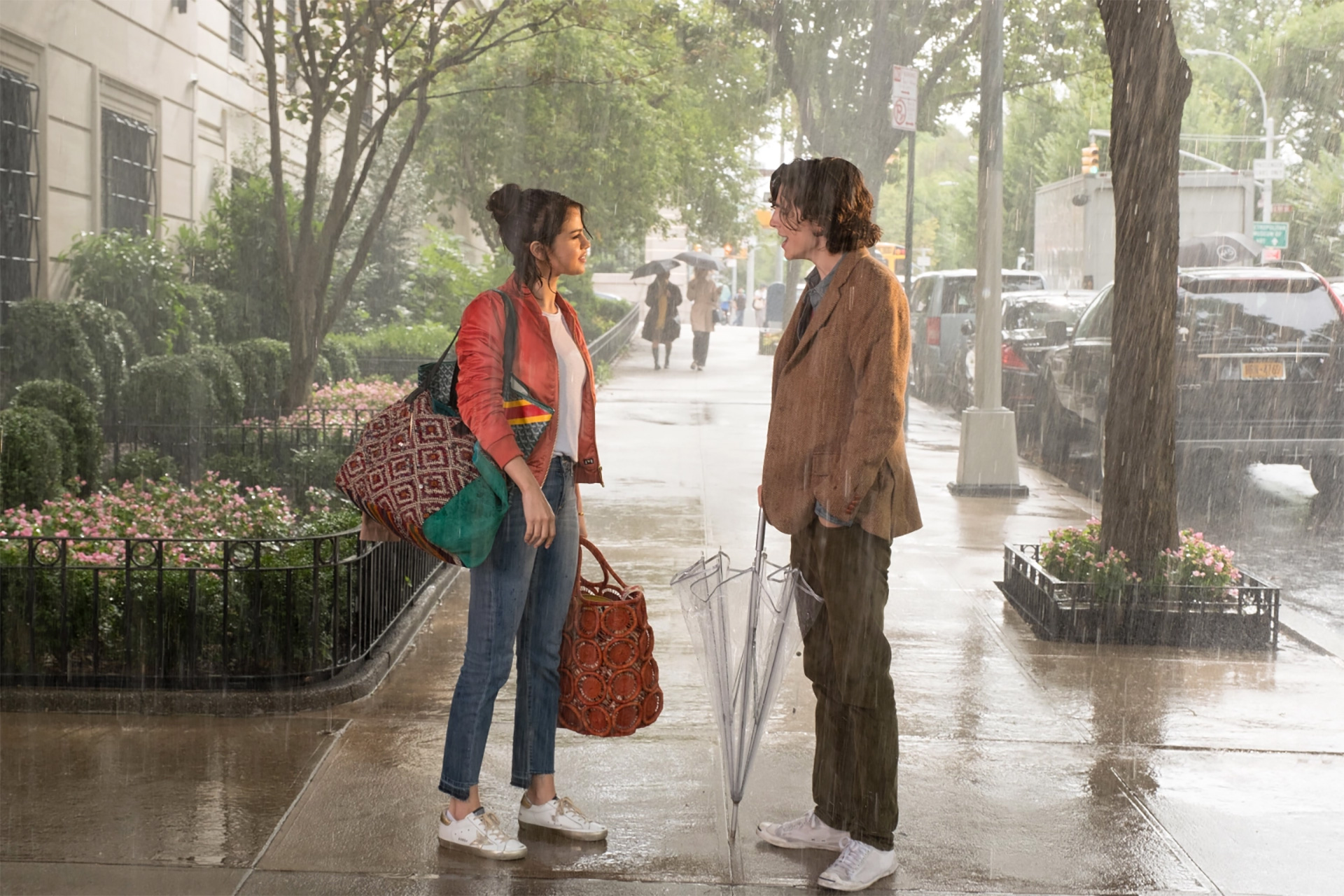 There’s a scene in Mike Nichols’ The Birdcage where Robin Williams’ character is helping Nathan Lane’s character be more “manly.” He has him mimicking different masculine figures including John Wayne to which Lane struts around only to catch Williams’ quizzical look and ask, “What? No good?” Williams’ response perfectly encapsulates how things we’ve been conditioned to believe are normal are actually absurd when taken out of context. He says, “Actually, it’s perfect. I just never realized John Wayne walked like that.” That line kept entering my mind while watching Woody Allen’s A Rainy Day in New York. The film was barely twenty minutes old before it asked Lane’s question and made me realize, “No. That’s a Woody Allen film. I just never realized how hollowly drawn most are.”

That’s not entirely true, of course. I did know. Watching the positions in which Hollywood and critics have twisted themselves to both “cancel” the auteur and defend his right to create have made it quite clear that the supposed collective adoration of everything he touches has always been predicated on a benefit of the doubt he no longer carries. That’s not to say he hasn’t still struck gold with the likes of Blue Jasmine and Midnight in Paris. The talent remains, but he’s not making a film a year courtesy of financiers paying for his name instead of quality anymore. The well of resources and collaborators has dried. So why not reserve what’s left for those gems? It’s time to recognize certain scripts should be left in the drawer.

This is where his privilege takes over the narrative. He doesn’t have to do that because people will still give him the money to do whatever he wants as a middle finger to those who have stopped kissing his ring. So why shouldn’t Allen make this script? Why shouldn’t he want to produce a story that has not one, but two “Woody surrogates” in the smug pseudo-intellectual Gatsby (Timothée Chalamet) and his ambitiously innocent girlfriend Ashleigh (Elle Fanning)? He can put SAT words into both of their mouths at the most unnatural moments while feigning empathy for the self-created and self-centered crises that confront them. He can pretend his audience will find anyone on-screen endearing because he doesn’t truly have to worry about financing the next one––even if he has to now look outside the United States.

I honestly wished the “moody” drizzle of Gatsby’s romantic fantasies would eventually turn into a tidal wave and wash them all away because they’re all so very insufferable. And why are we forced to put up with them? So a spoiled rich kid lamenting how his mother (Cherry Jones) spoon-fed him culture can finally grow a backbone and decide to live his own life? So he can arrive at that very obvious epiphany upon discovering the woman he loves doesn’t know who said a quote he recited? So he can seethe with disappointment and unironically treat her like he’s been saying his mother treated him his entire life? Gatsby is a two-dimensional caricature that only an out-of-touch affluent New Yorker can think a “regular guy” might be like.

And what about Ashleigh? She’s a journalism student at Yardley who answers more questions than asks. She’s drawn as a smart woman with honest aspiration and insight into the film world she’s covering (via Liev Schreiber’s tortured director Roland Pollard, Jude Law as his cuckolded screenwriter, and Diego Luna as this generation’s “James Dean without the acting chops” Francisco Vega) and yet always relegated to hiccupping (a clumsy device Allen writes in as a way of showing her sexual confusion) like a school girl as though caricatures of strong women being “silly” is funny and not utterly patronizing. Ashleigh is introduced with autonomy and yet ultimately becomes used as a pawn for the tiresome, emotionally stunted supporting men that barely earn as much screen-time as she does combined.

That leaves Selena Gomez’s Chan—the single person involved who isn’t averse to calling another out on his/her bullshit. That we’re supposed to believe she would continue seeing her older sister’s ex-boyfriend (Gatsby) as appealing with mature eyes rather than the pitiable fool he proves might be the largest leap of faith Allen implores us to take. He gives her dialogue that’s meant to be romantic (and foreshadow an ending that renders her the biggest pawn of all), but it falls flat because Gomez and Chalamet (and Fanning for that matter) speak so fast that it’s like they’ll forget their lines otherwise. Maybe if they slowed down they’d realize none of the women on-screen had a shred of motivation to care about any of the men.

Nor should they. Ashleigh is either dismissed as selfish (Gatsby loathes that she’s ruined his weekend with work when it was why they came to New York) or objectified as a muse for men who use and discard women to fill whatever emotional void populates their souls rather than get the therapy they desperately need. Gatsby’s soon-to-be sister-in-law is included so we can laugh at her laugh—a cruel bit of misogyny considering Allen goes out of his way to have her fiancée consider calling off the wedding because of it despite her being “perfect” otherwise. And there’s a sub-plot wherein prostitution is denigrated without nuance only to then exploit it as a ham-fisted show of admirable blue-collar ethic to be spit on again later with another quip.

I’m sure Allen apologists will say that A Rainy Day in New York was built as a way of self-ridicule with Gatsby’s incredulity towards women always finding older men attractive and filmmakers preying upon ingénues, but nothing in the text suggests that it is. I’d instead posit that this film is a middle finger of his own—one that highlights the vapid cruelty of his world as an admirable quirkiness he loves. Why else would he allow Gatsby the chance for a happily-ever-after that’s never earned? There’s zero redemption here. There are only sad-sack aristocrats pretending they’re better than their trust funds despite refusing to ever relinquish that money’s control over their lives. His lesson is therefore simple: even irredeemable assholes can find happiness. How profound.

A Rainy Day in New York opens in limited release on October 9.