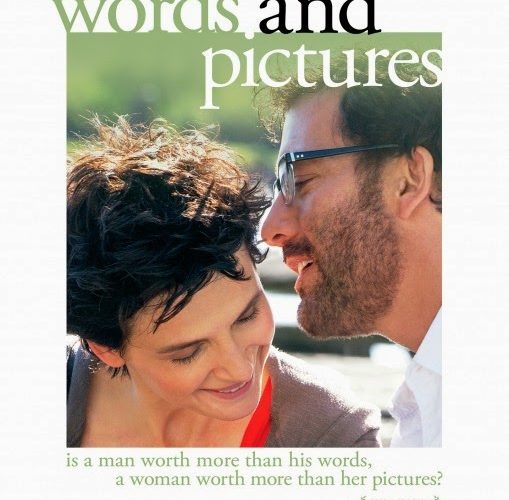 Two essential elements spring to the forefront of Fred Schepisi’s new romantic comedy, but they aren’t the titular Words and Pictures of the title. In fact, it’s the always luminescent Juliette Binoche and dourly handsome Clive Owen that justify the existence of this slight dramatic patchwork, although the movie keeps forgetting to move aside and let them collaboratively save the day. If you’re looking for a date night option, you might find that spending the time in company of Owen and Binoche is good value, but the pictures here tend to overshadow the quality of the words.

Owen’s Jack is that kind of movie professor we rarely see—or rather, are aware of—in a real prep school; he’s a nearly alcoholic author who’s moment of glory is far behind him, and now he wanders the halls like a ghost throwing out word games and brittle facts at his colleagues and students as if they were generous gifts. It’s not that I don’t imagine there are many a dissatisfied artist hiding behind stuffy academics, but few of them are this quirky and forthright in their apathetic snobbishness and few would still be lingering after similar classroom shenanigans. Jack, of course, is going nowhere—has been going nowhere for sometime in fact—and he needs an opposite force to attract him back to the world of the living. One manufactured movie creature deserves another, so we also get Juliette Binoche as new teacher Dina Delsanto, a painter struggling with rheumatoid arthritis, who sees verbal acknowledgment as a lying trap used to distract us from experiencing beauty. He’s the cad, she’s the bitter shrew, although Owen and Binoche and Schepisi are all smart enough to know better than to play them in that limited trajectory.

Watching two hurt people, grounded by frail humanness they can scarcely doing anything about, perform a cautious and acerbic courtship onscreen should be delightful to witness, especially when played by these two performers. To a point, it absolutely is, and Binoche and Owen hit on an unconventional chemistry that isn’t rooted in their Hepburn/Tracy squabbling, but in what rests underneath the outward indulgences of Delsanto and Marcus. There’s more to Jack than his grousing fidelity to etymological haughtiness, but he’s hidden it under his showier destructive tendencies, which includes the alcoholism. Owen plays the character with so many competing facets, that he literally overwhelms the surrounding triteness of the film’s story; at one moment we like Jack’s boozy charm, but a far darker current will leap up and shock us a moment later. Binoche avoids easy categorization in almost everything she’s in—her one scene in Godzilla even stands out from the genre trappings—and her work here is so wonderful and worthy of cherish because of how it seems to spring from the actress herself, with little watering or nurture from the rest of the production. Those paintings are really hers too, and even that level of detail adds an authenticity to this proud woman, who refuses to be pitied or classified as she’s learning that she’s hit a physical wall.

The film has been set up as a contrived and awkward game to pit these two wonderful actors against each other, and to thrust their characters toward one another romantically, but the essential uselessness of their conflict makes it hard to buy in to the premise. One teacher arguing for the value of words in the face of media imagery, and the other arguing for feeling and sensation over set-in-stone affirmation probably seemed like a great sparring field for a witty, nuanced pair like these two. The problem is that it’s handled in such a matter-of-fact and banal way—as a competition that sprawls across the school-year and ends in a debate assembly—that it sits outside of what’s happening between Marcus and Delsanto. In fact, that element is true of every character inside of Words and Pictures; what is happening to them is preferred to what’s happening within them, even though the confluence of the artist’s viewpoints would thematically suggest otherwise. As much fun as individual scenes are to watch, and as much as I wanted to see Binoche and Owen overcome the limitations of the script and its haphazard direction, that never really happens. Perhaps Schepisi and writer Gerald Di Pego should have moved away from an outward dichotomy in Words and Pictures, and proceeded instead from the most interesting conflict, the ones that rage within the leads. Marcus may cast disdain on art and sensation, but that’s because he’s seen his own failings and limits within what they represent, and the same is largely true of Delsanto and her accusation of words as ‘lies.’ The actors cultivate the hints and gleam of that promise, but it never fully manifests itself and we are left with a mildly amusing little movie, that’s smiling on the outside but keeps acting out, revealing a deeper, more troubled soul underneath.

Words and Pictures is now in limited release.