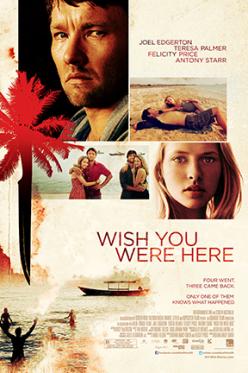 [Review] Wish You Were Here

Kieran Darcy-Smith’s Wish You Were Here arrives just in time to make you rethink that summer vacation to Cambodia. Co-written by and starring his real-life wife Felicity Price, Darcy-Smith’s Aussie mystery-thriller cashes-in on middle-class traveling anxieties; intent on letting their hair down and catching some responsibility-free R&R, four adults head out from Sydney to the beach-town of Sihanoukville, and only three return. Staged as a gradually blossoming portrait of rotted morality and familial angst, Wish You Were Here is satisfyingly sinister thanks to Price and the ever prolific Joel Edgerton as a couple haunted by the secrets they bring back with them.

Edgerton’s Dave Flannery envisioned the trip as a final, frivolous fling for he and his pregnant school-teacher wife Alice (Price) before the birth of their third child. The least convicing portion of the film is the idea that anyone would consider a wild Thailand weekend a good stop for a woman expecting, but one suspects early that Dave isn’t always as rational as he’d like to seem. They tag along with Alice’s sister Steph (Teresa Palmer), who’s happy to have company to off-set the presence of her new boyfriend Jeremy (Antony Starr). The opening scenes could be setting us up for the misadventures of inebriated, under-the-influence outsiders hilariously out of their league, but instead they precede tragedy. The foursome wander the streets interacting with desperate vendors, indulging their own exaggerated sense of danger by braving tarantulas on the skin and imbibing a variety of mind-altering substances. Darcy-Smith closes this montage of care-free tourism with the ominous sight of Edgerton, wandering tattered and disoriented through a wasteland. Eventually we learn that when the dust settled, Starr’s Jeremy was nowhere to be found, and now back in Sydney the mystery of what happened to him remains unsolved.

The domestic turmoil in Sydney, captured in the aftermath of the Cambodian trouble, accounts for the bulk of Wish you Were Here, with Steph trying to cope, Alice caught in the crossfire and David clearly possessing more information than he’s sharing. Events in both timelines are interspersed to create an escalating tension that contrasts the fall-out with the true nature of the incident that set it in motion. This tactic is terrifically effective in providing Here a realistic verve and thematic gravity that the slender concept doesn’t support on its own.

Jeremy, the disappeared man, haunts the tale in a manner similar to the missing characters in more nuanced work like L’avventura or The Picnic at Hanging Rock. There’s an existential dread to those pictures that isn’t even considered in Wish You Were Here, which settles for modest thriller aspirations; it’s the psychological potboiler as genre wind-up toy. The entire, tangy confection depends completely upon the atmospheric, tonally somber direction of Darcy-Smith and trembling, relentless performances of its leads. As viewers, we want to sort out the nature of David’s secret, but the truth itself is much larger and expansive than that, and as it grows it threatens to rupture and capsize the Flannery’s marriage. On its grounded terms the script keeps these characters captivating and reasonably sympathetic. Darcy-Smith and Price, who’s written herself a humdinger role, avoid abstraction or poetic license and instead find pop artistry in exemplary craftsmanship. The Cambodian sequences are idyll and lovely in the right places, meanwhile terrifying and shrouded in others. These travelogue vignettes are assembled next to a present that is full of shadows and stark, painfully mundane routines. This matter-of-fact visual language moors the audience in the immediacy of the situation while subtly suggesting the characters’ encroaching guilt and/or bewilderment as the screws tighten.

There’s a potential cheat in Wish you Were Here that almost sinks the dramatic arc the story is headed for. The revelation of what happened to Jeremy is not a forgotten event lost to a haze of drugs; it’s clear early on that David has full understanding of what transpired and despite the film following his point of view, the audience isn’t made privy to it until the conclusion. This choice robs us of a context for David’s actions and emotions as we witness them, and seems to primarily exist so the suspense can be sustained until the end. This fidelity to the plot above all else keeps Here from resonating as anything more than a clever little suspense picture. Of course, at the same time, this perpetual coyness with David’s deeds gives Edgerton and Price the chance to boldly sculpt characters who are unraveling not in the face of a single hidden fact, but with knowledge that so much of their life together is founded on illusory understanding.

Edgerton is often the best thing about the movies he’s in—his grand, insinuating turn in The Great Gatsby, the tenacious squad leader in Zero Dark Thirty—but in this film he’s the connective tissue that ties together the disparate emotional compartments of the narrative. David is the only one who knows everything right from the beginning, so Edgerton is portraying not a man on a quest of discovery, but a confused, cowering adult on a mission to quietly absorb the repercussions of irrevocable actions. Price, in a tremendous debut, keeps Alice steadfast and sure, a lighted beacon leading the film out of the darkness and into truth’s orbit.

Wish You Were Here is now playing in limited release.