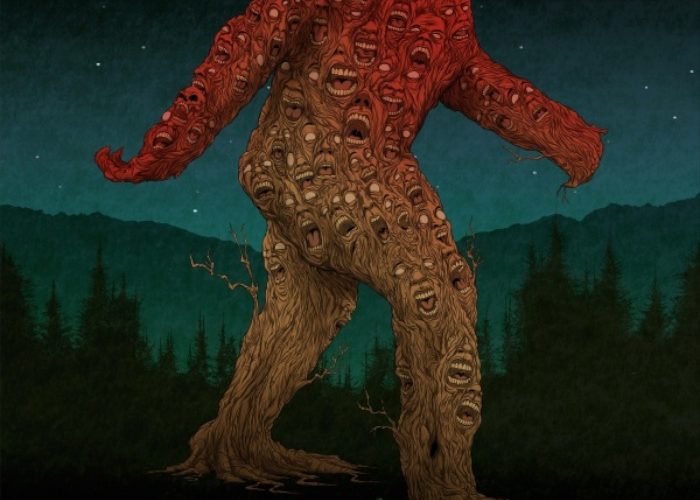 The best thing about the new found footage film, Willow Creek, is its nifty pairing of two undeniably quirky American originals, one famous for running in the buff along a Californian ravine and the other infamous for, among other things, once setting The Tonight Show couch on fire. I am of course talking about Bigfoot and Bobcat Goldthwait (in that order too), who seem like unlikely bedfellows at first but account for all the best moments in their movie despite neither ever appearing onscreen.

After heavily satirizing media saturation and the dubious cult of celebrity in God Bless America and World’s Greatest Dad, Goldthwait turns another corner and goes after that most hounded and reclusive of all tabloid-inspiring eccentrics, the mighty Sasquatch. I would have never expected the refreshingly original Goldthwait to follow-up America with a found-footage mockumentary horror film, but that spontaneity is all part of the charm and the result has plenty of his signature humor and snark despite adopting a gentler, more bemused stance this time around.

Willow Creek, after opening on an ominous nighttime shot, follows a likable couple, Jim and Kelly, as they head out to the titular town in California to make their own documentary in the same location where Patterson and Gimlin recorded their famous footage. Jim is the all-in believer with delusions of grandeur and Kelly is the dutiful skeptic, who asks questions like ‘where are the baby foots?’ and ‘how come we never find bodies?’ When they hit the town and run into the kitschy local adoration of the legendary anthropoid, I prepared for Goldthwait’s skewering of the Bigfoot community and their unwavering devotion. That never happens though, not least because it is clear that Goldthwait, at a certain level, identifies with Jim and some of the other believers, who demonstrate something approaching innocence when it comes to their wonder and faith in that which they have never seen. As a director, Goldthwait wears his passions and moods on his sleeve, and if God Bless America was angry and adamant then Willow Creek is affectionate and playful with its presentation of the Bigfoot culture. The movie features many real ‘experts’ in small cameos where they regal Jim and Kelly with stores, serenade them with songs (Roger and Bob is surprisingly catchy) and occasionally out-and-out threaten them to stay out of the woods. This section of the film is chipper, sunny comedy that never presses too hard and has lots of fun with the for-the-tourists mythologizing the locals participate in; a personal favorite of mine was the wall mural that illustrates a tribe of Bigfoot working as day laborers and roasting donuts over a spit. There is a goofy charm to the Discovery Channel docu style and Bryce Johnson and Alexie Gilmore have a relaxed but appealing energy as Jim and Kelly, their chemistry early on really paying off in the second, scarier half of the film.

Yes, that’s right; Willow Creek is primarily mounted as a horror film even if it never dips a single toe in that water until slightly later than the halfway mark. Once Jim and Kelly are down near the creek bed, out in the tent after hiking away from their vehicle, the film starts sliding towards the other end of its varied emotional spectrum. There’s a 19-minute single take that features the couple responding to a host of arcane noises emanating in the dark void beyond their tent wall, most of these aural manifestations matching up with the classic lore. The scene itself is terrifyingly realistic and captures the naked fear of being both contained and exposed at the same time. The remainder of the movie retains this paranoid atmosphere and by the time Willow Creek reaches its creepy conclusion the similarities to The Blair Witch Project have piled up. While I had more fun with Bobcat’s final reveal here, the rest of the movie suffers because of that comparison and what seemed fresh at the start winds down into an effectivebut overly-familiar found-footage shocker.

It’s clear that Bobcat has a fondness for those serious but schlocky Bigfoot movies from the 1960’s and 70’s–the most prominent being The Legend of Boggy Creek–and he stages Willow Creek as a kind of cheeky salute to their no-frills scare tactics. The the two halves of the movie work well individually, but they don’t actually congeal into a whole and we are left with two pleasant but disconnected impressions. While I appreciate Bobcat’s desire to abstain from mocking the Bigfoot enthusiasts, deciding to play the latter portion mostly straight defangs the material a little. If only he had included some of those wackier characters he mentioned in the Q and A, like the Ranger Rick type who wrote a young adult Sasquatch fiction entitled ‘Yeti or Not?’, or emphasized some of the subtle-but-sinister narrative connections he’s hidden throughout the film. Of course, those changes might make it more a Bobcat movie than a Bigfoot one and Goldthwait is having none of that. Here, mostly for better and only occassionally for worse, he lets the Big Man have his day.