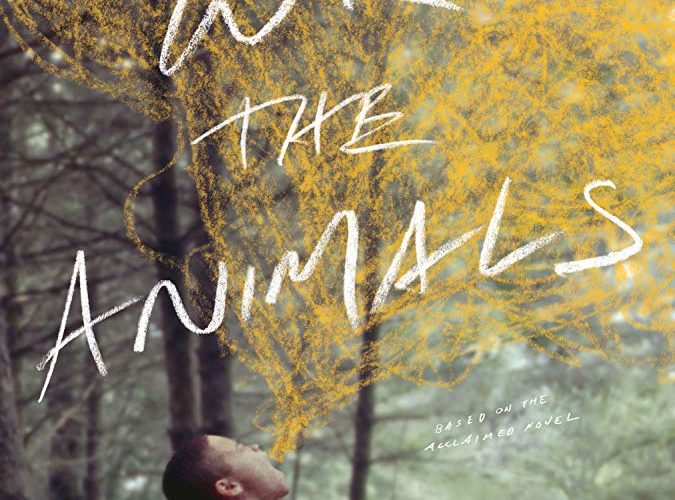 Review: ‘We the Animals’ is a Complex, Stunning Coming of Age Tale

The boys and their father are slumped in the back of a dying pickup truck. Minutes earlier, dad lost his job, in part because he brought the boys with him to his overnight security gig; the boss showed up, an altercation took place before the trio’s eyes, and now the truck is being towed. An eventful night, and as the father’s face makes clear, a rather devastating one. Losing the job is a crushing blow, one made all the more upsetting by happening in front of his children. He struggles to keep from crying as the boys look on, and the tow truck rumbles in the morning light. The youngest boy’s face responds to his father’s sadness, while the older two feed off of his anger. When dad slaps the side of the truck, all three follow suit. They bang and bang, the youngest shouting, “No more work! No more coffee cup! No more crying!” Suddenly, the tone of the scene changes, and the feeling becomes nearly joyful.

It’s a wonderfully complex moment in Jeremiah Zagar’s We the Animals — sad, emotionally affecting, even darkly humorous. It solidifies the misguided confidence of the boys and the bitter sense of defeat of their father. Most of all, it shows the third brother, Jonah, to be the outsider. As the youngest and the smallest, he would seem the weakest. In actuality, Jonah is the strongest by far, and We the Animals is his story. Based on author Justin Torres’s acclaimed novel and adapted by Zagar and Dan Kitrosser, Animals is a stunning, wholly original creation that brings to mind other films — Moonlight, Boyhood, American Honey, Beasts of the Southern Wild, even Ryan Gosling’s deeply flawed but tremendously underrated (yep) Lost River. Yet these allusions are subtle; We the Animals and its characters are unconcerned with pop culture. Subtlety, in fact, is an essential element in the film’s success.

Jonah (played by Evan Rosado) turns ten early in Animals, and for a child whose home life is fractured, to say the least, a birthday is not a momentous occasion. Jonah lives with his brothers, Manny and Joel, and their Puerto-Rican father, “Paps,” and Italian-Irish mother in upstate New York. There is a closeness between the boys, one that is a necessity in a house that is often unsettled. Their father (Raul Castillo) can be violent and abusive, but also loving; a moment in which Jonah sits on his lap at work is hugely affecting. Mom (Sheila Vand, star of 2014’s modern vampire classic, A Girl Walks Home Alone at Night) struggles to stay afloat amidst the chaos.

Jonah, meanwhile, retreats into a world of drawings and imagination. Zagar cuts to these sketches throughout the film, often animating them into beautiful, sometimes violent bursts of color. His journal is a secret, one kept under his bed, away from his brothers’ prying eyes. This is not Jonah’s only secret; as the film progresses, Jonah and the audience realize that he is gay. There are indications of this in his journal, and the scene in which the family has discovered these hidden pages is downright terrifying. But the reaction, and what follows, is not quite what one would expect. It’s that aforementioned subtlety, in the acting, the directing, and the writing.

We the Animals is most effective when it breaks free from conventional storytelling and relies on image, sound, emotion, and mood. Much of the film has an appropriately aimless feel, as the brothers wander the house and the community (the film was shot in Utica, NY). When events of great importance actually do occur, the effect is almost startling. The standout moments, though, are those in which introspection takes over. Zagar does not quite stick the landing — the discovery of Jonah’s journal seems to promise an ending that does not arrive — yet this, too, feels appropriate. When young Jonah retrieves his crinkled drawings and writing from the trash and smooths out the pages, we understand that eventually, he will be liberated.

Our almost parental feel for the character means we cannot help but want to see that liberation onscreen; if ever a coming-of-age tale cried out for a years-later follow-up, it is this one. The acting — from Rosado, Castillo, Vand, and Isaiah Kristian and Josiah Gabriel as the older boys — is beautifully natural. And Zagar, whose past is rooted in documentary cinema, reveals himself to be a filmmaker capable of real onscreen complexity. These are flawed individuals traversing a rocky landscape, and their concerns and actions are never less than compelling.

We the Animals opens on Friday, August 17.