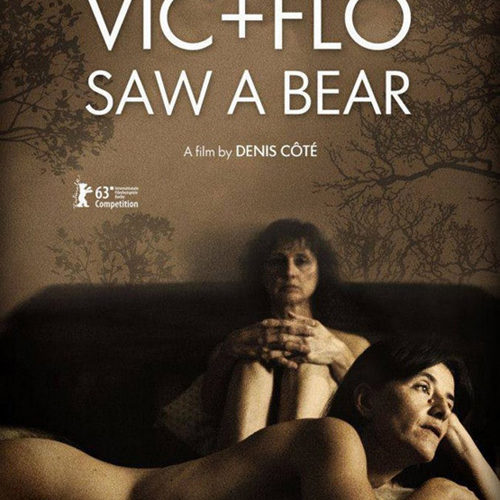 Writer/director Denis Côté‘s latest, Alfred Bauer Prize-winning (Berlin International Film Festival) Vic + Flo Saw a Bear is a mysteriously captivating creature. Looking from afar, you realize you know almost nothing about the circumstances thrusting his characters together. Yes, titular leads Victoria (Pierrette Robitaille) and Florence (Romane Bohringer) are ex-con lovers holing up in the former’s invalid uncle’s defunct sugar shack on probation and away from society, but we don’t necessarily know why. We infer they met in jail, hypothesize their crimes not being too severe considering their freedom, and wonder if their love story’s conclusion ends in peaceful solitude or the foreshadowed break-up Vic believes Flo’s boredom will bring. Côté adds a wrinkle, though, introducing a malicious face from the past preventing any potential tedium for them or us. Ill-conceived snap judgments become a major theme as a result of Côté’s conscious decision to keep us in the dark from anything that happened before we meet Vic in an unfiltered exchange with a young trumpeter trying to earn a buck at the bus stop she deems too inexperienced to deserve more than pity. Her arrival at Uncle Émile’s (Georges Molnar) is one of unpreparedness to his situation, abrasive to the man’s caretaker Charlot (Pier-Luc Funk), and dismissive to her probation officer Guillaume (Marc-André Grondin)—things we can believably accept considering her situation. The arrival of Flo, however, ushers in the real fun with Charlot’s father (Olivier Aubin) throwing around his sanctimonious weight, disgusted by the “sluts”; Guillaume interestingly warming towards them; and new neighbor Marina (Marie Brassard) saying hello with a sunny disposition and unmistakable ulterior motives.

In less ambitious hands this would simply be a tale of freedom and love becoming a prison more damning than the one these women escaped. Aspects to this end are included with Vic’s fear of isolation and Flo’s carnal desire for a male’s touch gradually pulling them apart, but a moment of unexpected brutality that would strengthen their bond in a generic romantic drama actually sheds light on their relationship’s weakness instead. Vic becomes comfortable and affectionate while Flo is injured with nowhere else to go, her usual anxiousness disappearing from the security her girlfriend’s tragic “accident” wrought. Such a reality only helps enlarge the chasm between them, though, as Flo realizes Vic will never be that way in more uncertain times. The older woman’s insecurities manifest worry for something that only exists because of her panic. Thoughts that Flo decided to live with Vic for reasons other than love don’t help matters once mention of an incident ten years previous develops a sense that the seclusion of Quebec’s forest may be sanctuary for the former rather than home. The aforementioned act of violence assures this as true and it unravels the idyllic future Vic dreamt but never honestly believed possible. She always knew there could be more to why a forty-year old like Flo would waste her time and sexuality with someone sixty-years old and under constant surveillance by Guillaume and she’s proven correct once Marina’s intentions are revealed. As this stranger’s wake distracts Vic from the realization their union is fated to close, however, Côté ensures no one is fully aware of just how dangerous and bleak things will become.

So what began as a love story turns into a puzzle of suspense wherein we never completely know what anyone is capable of doing. Vic and Flo’s propensity for sarcasm and biting retort definitely doesn’t make them a pair to actively seek friendship from and many like Nicolas blatantly show their displeasure in kind. More periphery characters are introduced with Vic’s brother Yvon (Guy Thauvette), Flo’s barfly lover (Ted Pluviose), and a stoic go-kart driver (Dany Boudreault) each coming into focus as meaningful before disappearing just as quick. In turn, Grondin’s Guillaume remains the only one to see the central couple for who they really are. Vic and Flo may not be overtly warm to outsiders but they are for all intents and purposes harmless. They may have even lived happily ever after if they’d been given the chance. But as is the truth of life, nothing ever goes quite as planned and consequences to our actions always risk coming back to haunt us. There is a complexity to both Robitaille and Bohringer’s performances, constantly showing something beneath their calm façades screaming to be set free. We wonder what it was that sent them to jail because we can tell this quiet retirement eats away at who they were no matter how much they’d like to pretend love makes it okay. Tired and defeated, though, Vic may have actually tricked herself into believing this was all she had left—gardening in her twilight years with a companion she’s never accepted she could be lucky enough to keep. And while Flo’s intentions may be pure, we know this life cannot satisfy her.

In the end, the addition of Brassard’s unpredictably volatile Marina provides the spark they once knew in younger years to wake from complacency—but not how they’d ever want it. She’s a remorseless, ruthless monster for no other reason than amusing herself; a scene-stealing turn accompanied by a telling timpani theme that somehow never feels too on-the-nose or obnoxious. A wild card invading Vic and Flo’s green pasture, she seeks to wreak whatever revenge she believes is owed and than greedily wants more. Is her devilish inclusion some kind of potential karmic comeuppance for the duo? Some metaphorical bomb giving shape to the strain in their relationship that they haven’t quite accepted yet? Even if completely taken at face value, though, Côté pulls no punches by letting you pass your own judgment on those who’re left.