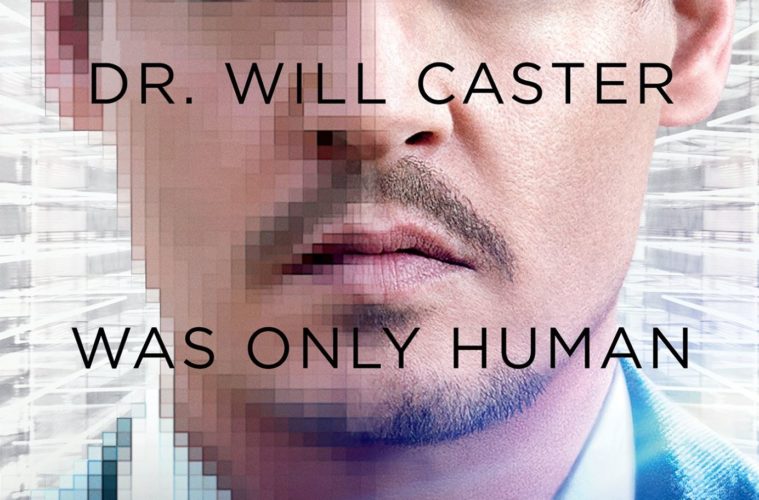 With a title of Transcendence the promise of mind-bending science-fiction is apparent before one sees a frame of the film. Too bad then, that Wally Pfister’s new AI thriller ends up being anything but, eschewing the awesome possibilities of its concept for ancient, creaky Frankenstein-esque indictments about man’s hubris. Pfister, who has long served as Christopher Nolan’s cinematographer, gives the movie the proper visual sheen, but although it may look like a Nolan film from the distance of the trailers, it doesn’t walk or talk like one, regardless of how many gentle speeches Morgan Freeman gives.

Playing like a somber, meditative update of that nutty 1992 virtual reality schlocker The Lawnmower Man, Transcendence introduces us to Will (Johnny Depp) and Evelyn (Rebecca Hall) Caster, who form a “brilliant” scientific duo working on a ground-breaking advancement in artificial intelligence. Will’s the rock star, in it for the science, and Evelyn the humanitarian who wants to help heal the world, while their buddy Max (Paul Bettany) sees the benefits but cautions about the perils. Freeman shows up as a grandfatherly mentor-type and Cillian Murphy is the Fed who wants in on the research, both of them seemingly delivered to Pfister as a Nolan gift. The film opens with a coordinated attack by a Luddite terrorist organization on AI labs all across the country, killing scientists and destroying years and years of research. Will is shot by one of the group at a conference, and learns later that the bullet that grazed him was laced with radiation. He’s dying, and desperate to save him, Evelyn and a reluctant Max upload his consciousness into their computers. Once he’s there, Will, released of the shackles of his body and now open to all that the connected digital world has to offer, begins changing in ways distressing to his family and friends.

One of the first things new Will—visualized in a strangely chunky digital image–asks of Evelyn is to put him online and once that happens, his influence and ambition only grow. Max is suspicious, and doesn’t believe that the entity on the other side of the screen is even Will, not the one they knew, anyway. Before he can sway Evelyn, he’s kidnapped by the terrorists—led by an unconvincing Kate Mara—who are intent on recruiting him to take down his old friend’s project.

Meanwhile Will and Evelyn have relocated to a dying Podunk desert town, where Will plans to launch his bid for conquering the world, using the freedom of the internet and an insidious Nano technology. Testing that tech on the town’s populace has some curiously salvific effects; it can heal the lame and make the blind to see, as long as the cured don’t mind being networked to an all-powerful AI who might need to use them in his puppet army. The conclusion is inevitable and pedestrian; the military, the Feds, Max and the terrorists all converge on Will and Evelyn, with the real showdown occurring between the super-charged scientist and his wife, a battle of ethics and emotions waged for the sake of the world as we know as it. It always feels like a precarious transition when a film artist like a cinematographer or special effects designer makes the jump to feature director. Sometimes it works, and sometimes it doesn’t. In the case of Pfister, it’s going to be hard to call his directing career based off Transcendence alone. Looking at the film, it’s easy to appreciate the contribution that he brings, both artistically and technically, to Nolan’s productions. The film and its locations, even when they are antiseptic computer labs, all look terrific and he imbues the picture and its themes with a laconic, contemplative tone that favors the characters and the ideas over action, event and spectacle. The problem is that at a script level, the movie has cardboard character types who never fully spring to life and its ideas are more like suggestions pulled from Popular Science articles or old Analog stories. Nolan’s films, love them or hate them, feature an all-in boldness and confident vision that frees Pfister up to work his atmospheric magic, and here he feels relegated to texturizing a flat artifact that wasn’t ready for primetime.

It’s hard to believe that when someone opened the discussion about making a film featuring an evolving artificial intelligence, this particular script and story were the ones ultimately used for production. It’s not that there aren’t tidbits of interest in the film—the fact that the A.I. is more lofty and detached than megalomaniacal or evil is underutilized—but they are in service of a story that hasn’t thematically or intellectually evolved from the days of 1950’s cautionary tales about the dangers of technological avarice. Paranoid thriller seems like the wrong tactic for a movie called Transcendence, and knowledgeable sci-fi readers will know that there are numerous novels out there that also explore the potential wonder and enormity of what a sentient, aware intelligence could do to, or mean for, the human race. Instead, we feel like we are hovering above the narrative, looking at the events but not actually involved in them and the miraculous being at the center of the story is just a straw man villain played by a bored actor who’s not connecting with the material. Why must the intent and emotional identity of the AI be secret and vague here? Why couldn’t Transcendence feature Will as the main character, and his movement from dying mortal to unleashed, omniscient entity be experienced from his perspective? A film of that nature might have been revolutionary or at least entertaining and thought provoking. At every turn, we are denied access to the compelling ideas dangled in front of us. What do those automaton workers repurposed by Will actually feel, and do they willing serve or are they really just drones working for an artificial overlord? Why does Max the scientist  willingly join the terrorists who killed his friend? What does Evelyn really feel for this new Will, just a sense of solidarity and misplaced love that she had for the man?

It’s been awhile since I’ve seen Depp so seemingly disinterested or de-energized by a role, and although Rebecca Hall does what she can with the doting wife, it mostly feels like a rehash of her Iron Man 3 character, while Bettany, Freeman and Murphy are wasted on indistinct placeholders that could be played by anyone. The cumulative efforts of Transcendence, even when they seem to be sincere and thoughtful, amount to a big shrug. Whether we like it or not we live in an age where technology has defined our society and has impacted our own perceptions of being human. Don’t give me the same prehistoric platitudes served with action dressing. Transcendence would have looked like obsolete software right after The Matrix came out, but following Spike Jonze’s masterful Her, which actually took a long, hard and perceptive look at our cultural relationship with technology, it feels like a one way trip back to the Dark Ages.