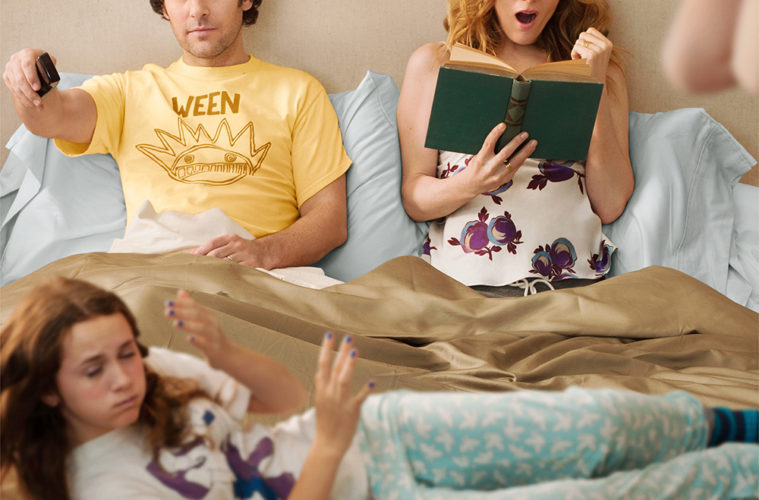 It’s time to accept that the words “Directed by Judd Apatow” are synonymous with “sentimental familial dramedy littered by profanity.” I probably should have come to this realization years ago, but for some reason I still held out hope he’d once more match the entertainment value of The 40 Year Old Virgin. Everyone loves Knocked Up, I know, but to me it was a slow bore with few of those indelible moments his debut etched in my mind. Funny People was an improvement—at least the first half before devolving into unnecessary sappiness—so a glimmer of optimism still remained for This Is 40. But while Paul Rudd‘s Pete and Leslie Mann‘s Debbie were Knocked Up‘s highlight, giving their characters 136 mercurial minutes onscreen is too much. There simply aren’t enough laughs to sustain it. This isn’t to say the film is a waste—I’d probably put it below Funny People as Apatow’s number three—it’s just disappointing to acknowledge this is now the director’s niche. I can’t even really blame him since he produces so much of the sort of work closer aligned to Virgin such as Bridesmaids, letting his troupe of comic players rev up the raunch while he dissects the nuclear family. With his real life wife Mann as his newest film’s mother and their actual daughters playing her kids (Maude Apatow as the elder Sadie and Iris as Charlotte), one can’t see This is 40 as anything but an autobiographical account of his own marriage’s trials and tribulations. The situations presented do happen to us all eventually; they’re humor residing in the fact they’re relatable.

At least the psychology of them is considering few real couples struggling to survive our rough economy are made up of two business owners. Admittedly, it’s somewhat hard to care about financial woes when Pete and Debbie live in a huge house and own a record label and dress boutique respectively. That said, watching their kids grapple with a new generation of electronics and social media is completely universal as well as the cattiness inherent in parents locking horns when their kids’ self-esteem is involved. Jokes of Mann lying about turning 40 and Rudd eating water-logged cupcakes out of the sink are far from original inside a culture bred on New Year’s resolutions, but they’re forgivable because of the laughs delivered when delving into the subject of twenty-first century parenting.

Maude and Iris are obnoxious and cute; traits I’m sure were developed during the scripting stage and not necessarily just them being themselves. They must possess strong personalities to mirror their parents’ attitudes because there’s nothing more human than adults yelling at their children for doing exactly what they did minutes before. This is the type of comedy that works and what should have been all the film dealt with. Pare down the runtime to a solid 106 and This is 40 could be fantastic. We don’t need extended families getting involved, especially when you don’t even mention Mann’s sister Alison (Katherine Heigl), the star of its quasi-prequel. And seriously, both grandfathers (Albert Brooks and John Lithgow) need to have new, younger families? Again, it’s too much.

Even the side characters—although oftentimes a riot—become fluff taking us away from the whole reason we’re watching. Charlyne Yi gets a demented scene to shine; Megan Fox is little more than a pawn to get Mann into a dance club and Chris O’Dowd and Jason Segel into a humorously awkward lust triangle; Robert Smigel is a nice companion for Rudd’s exasperation; and Melissa McCarthy delivers one of the best roles not for what she does but instead for what she gets Mann and Rudd to do. Yes, they’re fun and cultivate a light air around a central relationship that does get dark at times, but to what end? The supporting players shouldn’t overshadow the stars. Stick to Pete and Debbie, they have enough problems as it is. The rest either subverts their effectiveness or minimizes they’re appeal. Turning 40 is a pivotal moment in a person’s life and the little details of this milestone may have helped the final product more if they weren’t relegated to a brief, hilarious montage of doctor’s visits. This is what the movie was made for, don’t just push it to the side for easy jokes about a sixty-year old man with high blood pressure taking care of five-year old triplets he can’t tell apart. I loved Rudd and Mann’s meltdowns when at home contrasted by their serene love fest away. Watching him argue with Maude about whether Lost or Mad Men is better is a priceless commentary on generational gap, tastes, and our emotional attachment to things that truthfully do not matter. Their friends are merely props; this intimate foursome under one roof is real.

Having four Philadelphia Flyers, Graham Parker, Billie Joe Armstrong, and Ryan Adams cameo don’t therefore make it more authentic. Apatow overcompensates by littering in actual public figures to make his characters’ upper class existences come to life. Honestly, it comes off a bit self-indulgent and alienates me further from truly relating to his stars. Judd needs to strip it down and have faith in what works without drowning it in flashy extras that kill pacing and cause us to forget what matters. This is Mann and Rudd’s show and they are brilliant throughout whether lovey-dovey, contorted in rage, or passive aggressively fake with the outside world. They and the Apatow girls ring true from front to back, it’s just a shame their director seems to want to continuously move the spotlight away.

This Is 40 opens wide on Friday, December 21st.