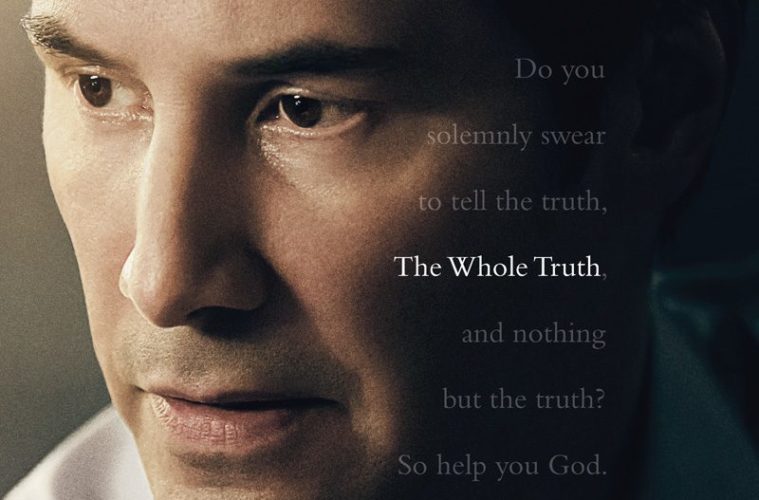 It’s been a curious few weeks for adult fare at the multiplex. With girls on trains, autistic accountants and ex-military vigilantes, there’s no shortage of movies that your mom would love. Courtney Hunt’s The Whole Truth fits nicely into that roster, but without the bestselling book, high concept or star power to warrant being a fall tentpole. It instead resembles a film whose script has been sitting on a shelf since 1996, cast included.

Situated as standard courtroom drama fodder, the film opens on Keanu Reeves’ cynical defense attorney Richard Ramsey having a bad time. Through the confines of some unwelcome narration, we learn that he is tasked with representing Mike Lassiter (Gabriel Basso), a teenager on trial for the murder of his wealthy father and neighborhood shitheel, Boone (Jim Belushi). Ramsay is on the wrong end of what appears to be an open-and-shut murder case. He is more or less defenseless, as Mike hasn’t spoken a word since the day of the murder. At the behest of Mike’s mother Loretta (Renée Zellweger, continuing something of a comeback in the form of the battered wife), Ramsay moves forward, enlisting the help of burgeoning lawyer and bullshit detector Gugu Mbatha-Raw as testimony after testimony against Mike unfolds.

Herein lies one of the film’s only worthwhile flourishes. As witnesses testify, simultaneous flashback reveals the truth (oh now I get it!), allowing us to watch them lie and embellish in real time. It’s nothing particularly novel, but it certainly adds a bit of ongoing intrigue into otherwise standard proceedings. It grants the film, in fits and spurts, an ability to play with the idea of why people lie and the amorphous nature of perspective. However, the film abandons some of its loftier ideas, and instead uses this structure for relatively unnecessary hairpin turns. It becomes too twisty for its own sake, adopting the same bad habits that ran rampant in so many 90s thrillers.

That, I suppose, is part of the film’s charm. It is outside of time. It’s got a satisfying schlockiness to it in the spirit of The Lincoln Lawyer or, even further back, Primal Fear (sans Edward Norton’s fun scenery chewing). The presence of Reeves and Zellweger only further that notion. Despite signing on after a last-minute Daniel Craig departure, Reeves feels more at home here, taking on the kind of role he would’ve crushed in his late-90s/early-2000s peak. Had the film been released then, with these two still on hand, one can’t help but think that it would’ve have received the same amount of fanfare that its current counterparts are receiving. Instead it’s been tucked away in a VOD release and a minuscule theatrical run.

There’s nothing monumental at play in The Whole Truth, but it’s not entirely without merit, satisfying on the same level one would digest a grocery store paperback. It joins this fall’s adult endeavors as a movie you likely won’t see, but your mom would totally love.

The Whole Truth is now in limited release and available on VOD.