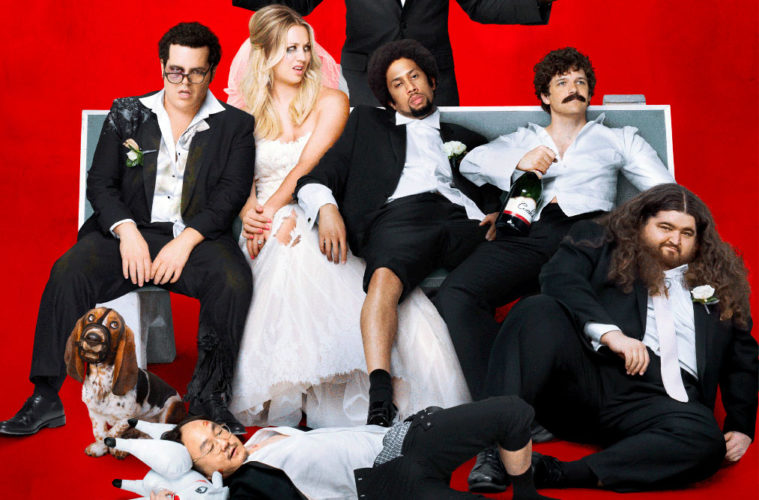 If Kevin Hart ever makes a sequel to his concert film Let Me Explain, I hope he explains the circumstances behind his latest effort, The Wedding Ringer, an incompetent comedy that must have either gone horribly wrong or simply started with a low bar. The premise is this: Hart plays Jimmy (aka Bic Mitchum), a lonely, jaded man who runs an operation that provides best man services. He’s kind of like a “escort,” offering companionship services between two consenting adults for a limited time only, and his rates start at $20,000. Enter Doug Harris (Josh Gad), a workaholic schlub with no friends. He’s about to marry Gretchen (Kaley Cuoco-Sweeting), a spoiled white girl raised wealthy with simple aspirations: she wants to have nice stuff. Don’t worry if you don’t like and can’t relate to these people, it doesn’t get better.

Simulating comedy, it contains not one original part, as if it was adapted by writers Jeremy Garelick (also the director of this mess) and Jay Lavender from virtually every bad Adam Sandler film you’ve ever seen. The blueprint includes the introduction of late romantic interests that will ultimately shift the paradigm for our “heroes,” as well as crude jokes involving the elderly. The image of a burning grandmother belongs in a horror film, not a comedy; the scene in question is a virtual masterclass on comic timing. It’s rather remarkable just how poorly organized it is. Garelick’s direction is excruciatingly painful and, like Wedding Crashers, includes a very long, unfunny football scene that makes another terrible filmmaker, David Dobkin, look like a comic genius. What could have been a core character motivation for Doug (the loss of much of his family) is glossed over as he aims to fit in with his new pals for hire. The comedy here is not necessarily about behavior because that might require us to have a shred of interest in any one of these characters. Cuoco-Sweeting plays her motivations simply while given too little to do. She never has quite enough fun embracing the bitchy, ambiguous potential of Gretchen. And then there are the groomsman for hire (seven of them), none of which have dates for the eventual wedding — no wives, girlfriends, life partners to speak of. The motley crew includes Kip (Alan Ritchson), a male model with a stutter, a creepy TSA agent named Reggie (Affion Crockett) and Fitzgibbons (Colin Kane), an ex-con who engages in “hilarious” child abuse during his first appearance on screen. Sexiest and sophomoric, The Wedding Ringer is a sitcom at its core, right down to an unfunny bumper that opens the film, even before the studio logos and head credits appear.

Bluntly, The Wedding Ringer deserves a special place in hell, feebly venturing where other films have gone before (recently, Patrice Leconte’s My Best Friend and John Hamburg’s I Love You, Man) and it fails miserably. Since Bitch Mitchum often talks of burritos, I’ll offer this analogy: My Best Friend is like dinning at the excellent, fresh Guero’s Taco Bar; I Love You, Man is not unlike the food made with integrity you’d find at your local Chipotle; The Wedding Ringer is the cinematic equivalent of a frozen, genetically-modified burrito past its expiration date and microwaved at a sketchy gas station.

This film exists within its own upper middle-class, Los Angeles bubble. The focus on first world without veering into real or interesting or unexpected territory alienates instead of providing the imagined intended effect of escapism. Sure, movie characters are better looking than us and usually have nicer lives, but here they’re all extraordinarily pathetic, dull, and motivated for all the wrong reasons until their eyes are temporarily opened. After a long bit of exposition (flunking screenwriting’s first rule: show, don’t tell) the film makes an attempt to inject a bit of heart into its third act but by then the patient is DOA. Comedy should come from the unexpected, but offering zero surprises, you have most certainly seen The Wedding Ringer before. If Kim Jong-un really wanted to punish Americans and stick it to Sony Pictures, he would have replaced the whole of YouTube with this intellectual human rights violation.

The Wedding Ringer is now playing in wide release.